A couple in Paradise, N.L., weren't deterred when they learned the boy they wanted to adopt from an orphanage in Kazakhstan was born without his right hand — in fact, it made them want to adopt him more. 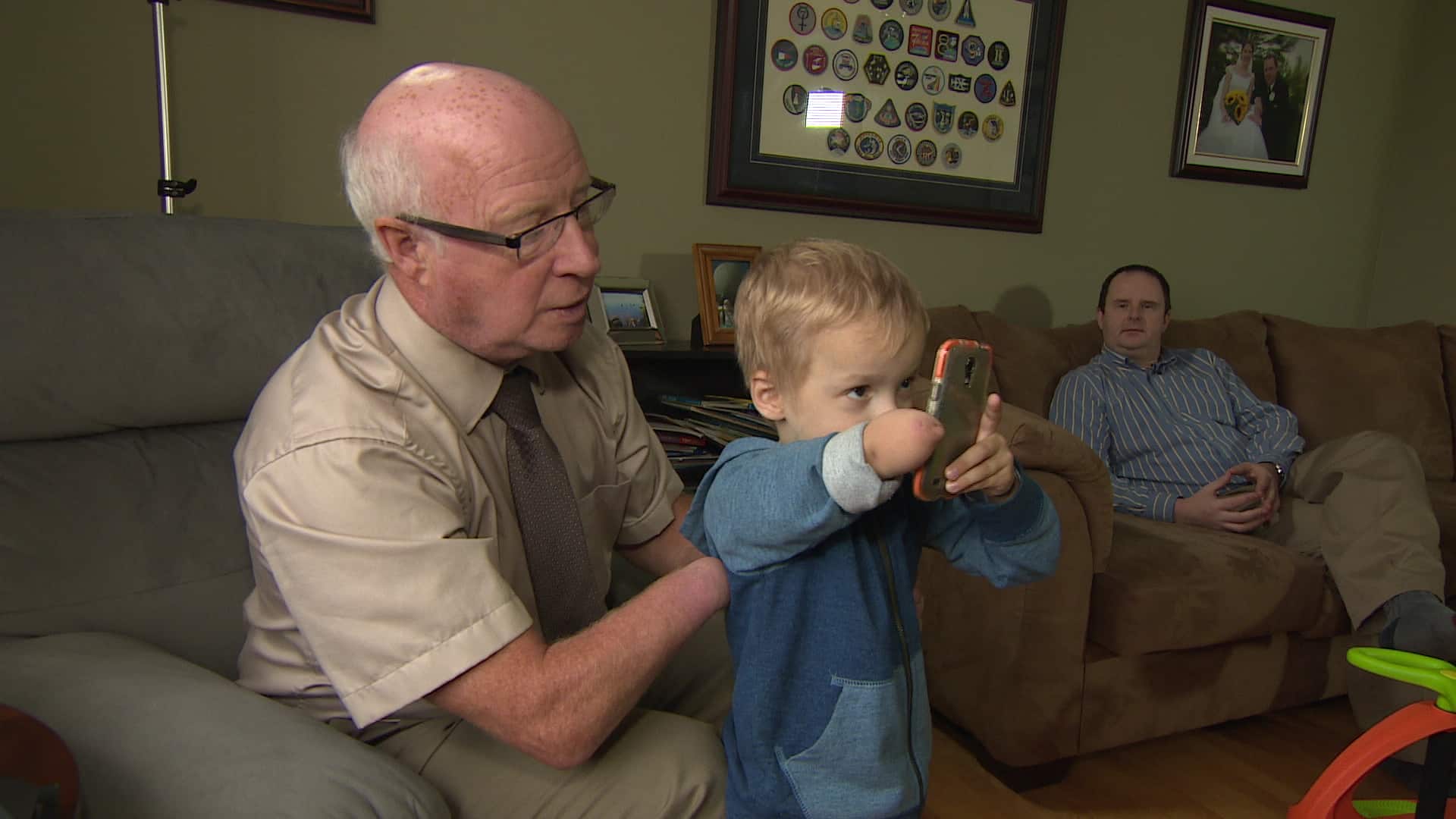 5 years ago
4:27
A couple in Paradise, N.L. weren't deterred when they learned the boy they wanted to adopt from an orphanage in Kazakhstan was born without his right hand — in fact, it made them want to adopt him that much more. 4:27

A couple in Paradise, N.L., weren't deterred when they learned the boy they wanted to adopt from an orphanage in Kazakhstan was born without his right hand.

St John's Morning Show9:03Miracle child
The story of a family that couldn't have a child and their special connection with a child no one wanted. 9:03

Lesley and Doug Facey said it actually made them want to adopt the boy, named Kirill, even more. Kirill was born without a hand and so was Doug's father.

"It's never stopped Dad from doing what he wants to do," Doug Facey told CBC News.

"From sports to business to family to whatever."

"All he did was point at the screen and say, 'He's like me.'''- Doug Facey on showing his dad Kirill's photo

The boy was just 20 days old when his biological parents placed him for adoption.

During his time at the orphanage in Karaganda, six Kazakh couples had the opportunity to adopt the boy. All passed because of his disability.

It wasn't until March, when the couple received their first photo of Kirill, that they discovered he was missing his right hand.

"I called my mother to tell her the news, and forwarded her the picture, and she was bouncing off the walls," Doug Facey said.

His mom urged him to share the photo with his dad, Chris Facey, who was also born without his right hand.

"I turned the screen for him to see the picture and all he did was point at the screen and say, 'He's like me.' And you could see the tears," Doug Facey recalled.

The couple said workers at the orphanage weren't enthusiastic about the adoption.

"They kept emphasizing throughout the process, 'Do you really want a child with one hand?'" said Doug Facey.

But he and his wife had already decided.

"How could I sit there and say 'This is going to be a problem,' when you're looking at this man who's been to the Paralympics," Lesley Facey said of her father-in-law.

"He's a great philanthropist in the city, he's a very successful businessman."

"He's the absolute perfect role model to show that this is not a disability, that he can do whatever he sets out to do, there's nothing going to hold him back," she said.

When the Facey family arrived at St. John's International Airport with Kirill, the young boy met his new cousins and grandparents for the first time.

"He was staring wide-eyed at dad when he first saw him," said Doug Facey.

Before that moment, Kirill had never before seen another person who looked like him.

"I went over and knelt in front of him and I just stuck out my hand. [Kirill] was sort of taken aback and he reached out with his stump and he touched mine," Chris Facey said.

Doug and Lesley can hold me over him. 'If your grandfather can do it, you can do it.'- Chris Facey, grandfather of Kirill

Lesley Facey says her energetic son has quickly settled into his new home, and his English is improving every day.

Kirill, she said, loves simple things like tidying up around the house and accompanying his mom to the grocery store.

"They didn't have baths over in the orphanage ... Just a wipe down was all they could do because 12 kids, two workers. I've never seen a child love a bath so much," she said.

For Chris Facey, being born without a hand was never a setback — it was the only thing he knew.

He said that's something he and his grandson will share.

"Doug and Lesley can hold me over him. 'If your grandfather can do it, you can do it,'" he said.

"He's going to get the best chance to be the best he possibly can. He's bright, he's smart ... He's a keeper."

With files from Amy Joy