German U-boat may be at bottom of Labrador river

An important piece of history from the Second World War may be at the bottom of the Churchill River.

Divers believe they have located WWII submarine 100 kilometres from ocean 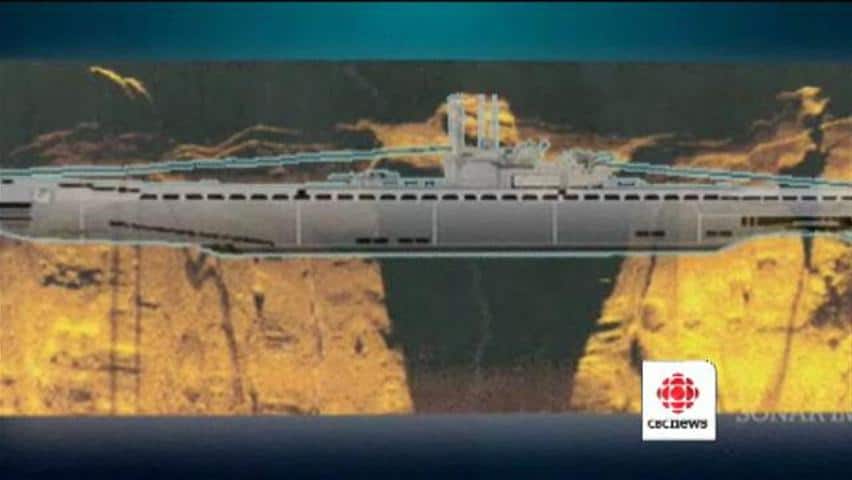 8 years ago
2:31
Searchers believe a WWII German submarine may be in a Labrador river, reports Peter Cowan 2:31

An important piece of history from the Second World War may be sitting in a river in Labrador.

Searchers believe they've found a German U-boat buried in the sand on the bottom of the Churchill River. The discovery has yet to be authenticated.

Two years ago, searchers scoured the bottom of the Churchill River with side-scanning sonar. They were looking for three men lost over Muskrat Falls.

When they reviewed the footage from that search, they made an unexpected discovery.

"We were looking for something completely different, not a submarine, not a U-boat — I mean, no one would ever believe that was possible," Brian Corbin told CBC News.

"It was a great feeling when we found it."

At first glance, it can be hard to spot the submarine on the sonar image of the riverbed. When you put it next to a drawing of the boat, some of the features become a lot clearer.

The length is about 30 metres, or "exactly what our side-scan sonar shows," Corbin said.

"So we're pretty sure it is, and we've filed this with receiverships and wrecks, and I think they're confirming that it is possibly a U-boat."

It's unclear how the sub may have ended up that far inland, more than 100 kilometres from the ocean.

The area, though, was strategically important during the Second World War. An air force base, which the U.S. military used extensively during the war, was built in the early 1940s, and operates still as 5 Wing Goose Bay.

The German government says it is possible, but added that it would be "sensational and unusual," that a submarine could have ended up so far inland.

"We do know that German U-boats did operate in that region," said Georg Juergens, the deputy head of mission for the German Embassy in Ottawa.

He notes that a Second World War-era, battery-operated weather station was found decades after being left in Labrador by a U-boat. It is now on display at the Canadian War Museum in Ottawa.

"We must brace ourselves for surprises," Juergens told CBC News, while stressing that the submarine has yet to be positively identified.

More than a dozen U-boats may still be unaccounted for, he said.

If the mystery find is proven to be a submarine wreck, the German government does not favour bringing it to the surface.

"That would be against our tradition and our naval customs," Juergens said. "This site then would be declared a war grave at sea."

According to Juergens, the Newfoundland and Labrador government is now involved in efforts to authenticate the possible wreck.

Back to the river

If the German government agrees, Corbin wants to head back out onto the Churchill River.

He'll use a remote-operated vehicle to take a closer look – and, he hopes, answer the question of whether there is a submarine there once and for all.

Oddly enough, the story of a U-boat beaching in the Churchill River is the subject of a novel written in the early 1990s.

In that story, the crew defects. Over the years, many have taken this fictional story to be fact.

There have also been other recorded incidents of U-boat activity in the waters off Newfoundland and Labrador.

According to the Newfoundland and Labrador heritage website, submarine U-587 fired three torpedoes at St. John's earlier that year. Two of them hit the cliffs below the city's iconic Cabot Tower.

When the war ended in 1945, U-190 surrendered to Canadian forces and sailed into Bay Bulls, just south of St. John's.

A piece of that U-boat stayed in Newfoundland — its periscope found a home at the Crow's Nest Officers' Club in downtown St. John's, where it remains to this day.