Tamara Rowsell's family was told she wouldn't live past six months. But this year, the 17-year-old from Gambo, who is living with a rare illness, went to her high school senior prom.

Tamara Rowsell, who has Donohue syndrome, has beaten the odds to make it to her high school graduation

Tamara Rowsell wasn't supposed to live past the age of six months. But this year, the 17-year-old from Gambo went to her senior prom.

Rowsell was born with a rare genetic disease called Donohue syndrome. The symptoms include high levels of insulin, stunted growth, and organ and tissue problems, and is often fatal.

On graduation day, though, it's not about all the troubles she's gone through. Rowsell and her family are celebrating a day they never thought would happen.

Rowsell wore purple, her favourite colour, paired with a tiara and sparkly silver shoes — in size 2.

It wasn't just her outfit she was excited about. She also put in a lot of work to help the school get ready.

"It's been me and Mom and Dad; we've been going up and decorating. We wouldn't get home [until] like 9:30 or so. So I would be staying up to 10 o'clock or 10:30 and the next day going back to school and again through the week so that we managed to get everything done."

But the most exciting part came during grad night itself, when her classmates voted her prom queen of Smallwood Academy.

Rowsell spend the first year and a half of her life in the Janeway children's hospital, her mother by her side the whole time.

Donohue syndrome is extremely rare — occurring once every four million live births — and people born with it usually die very young, but Colleen Rowsell says her daughter has beaten the odds, thanks to Janeway staff.

"We ended up having this awesome doctor, Dr. Geoff Downton, that found the drug that she is on, which is called the IGF, which helped her insulin levels come down to normal range." 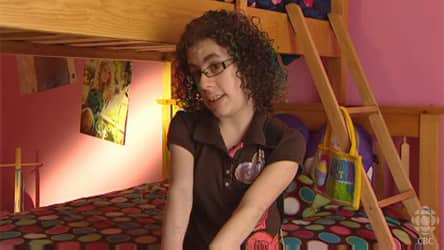 "That's the only thing that's keeping Tamara alive today is this injection," says her mother.

Tamara Rowsell usually wears a backpack to carry her feeding tube. But on grad day, she had a special purple purse, made up of leftover fabric from her prom dress.

A complete miracle ... a day we really did not expect to see.- Colleen Rowsell, Tamara's mom

For Lillian Brown, Tamara's grandmother, graduation day is not only for her granddaughter. It's for her daughter, Colleen, too.

"She's a great mom. She stuck by her side, she spent a full 16 months in the Janeway and she was there every day. The nurses had to fight with her to get her home. What they used to do, we went in and picked her up so she could have a weekend to herself while the nurses took care of her," said Lillian Brown.

While Tamara is graduating this year, she isn't moving out. Her grad gift was her very own apartment attached to the family home. That leaves dad Tristan Rowsell without his man cave. But he's happy to give it up for his daughter.

"It's that next step to watch her be an adult, and seeing how she's going to make these challenges through life. But we're quite happy and we're going to be right by her side the whole way," he said.

For the Rowsell family, it's one day at a time.

"The children that are born with this, they don't survive very well at all," said Colleen Rowsell. "[It] has been a complete miracle that Tamara has made it that far to her graduation day —  a day we really did not expect to see."

With files from The Central Morning Show