65 years and a lifetime apart, this couple once again found love together

Frederick Paul and Florence Harvey were just teens when they first fell for each other in the 1950s, but it wasn't until 2020, after a lifetime apart and amid a global pandemic, that the couple once again found love and partnership in one another.

'I knew right away that she had taken my heart back again,' says Frederick Paul

Frederick Paul and Florence Harvey were just teens when they first fell for each other in the 1950s, but it wasn't until 2020, after a lifetime apart and amid a global pandemic, that the couple once again found each other.

At age 18, Fred had been courting Florence in their small outport community of Wandsworth, on Newfoundland's Burin Peninsula.

But in 1955, his father, who worked in the fishery, asked him to travel to Nova Scotia on his behalf to walk his sister down the aisle at her wedding. From there, Fred went to Toronto to see his brother. When he ran low on cash, Fred landed a job to earn some money, and wound up staying there for a year.

When he came back home for a visit, Florence was gone.

"She was off to St. John's to take a teaching course for the summer school and we didn't get to meet again," Fred says. "After my vacation was over I came back to Toronto, and then we went our separate ways after that."

In Ontario, Fred would meet his wife, Helen. In Newfoundland, Florence met her husband, Len. They lived happy, separate lives.

Both couples would have children and, later, grandchildren. They weren't in touch again, with the exception of a quick five-minute conversation in passing years ago when both families returned to Wandsworth for a Come Home Year celebration.

It wasn't until last Feb. 15 — a day after Valentine's Day — that the couple would once again be in contact, prompted by their well-meaning, and perhaps mischievous and plotting, brothers.

"We both have brothers in a seniors' home in Marystown, so while I was visiting my brother, his brother was there," Florence recalls. "He said, 'I'm gonna give you Fred's number." Florence says Fred's brother said he'd asked Fred if it was OK, and Fred said it was but added "she'll never call me."

Florence kept Fred's Ontario phone number — "I don't know why," she jokes — before calling him a few days later.

"It was after Valentine's and I knew his wife had died.… I was lonely, he was lonely, so I thought, 'Well, I'll just call him and offer him my condolences, I guess,' because he had lost his wife the fall before, and to tell him that it does get a little easier," Florence said. She had lost her husband three years prior, she said, so she knew how Fred was likely feeling.

The two reminisced about growing up together, laughing at the memories shared a lifetime ago. It was a conversation Fred said came unexpectedly.

"It was a surprise — I didn't expect her to call. But as she said, you know, it's lonely when you lose your mate after 60 years," Fred says.

That conversation was the first of what would turn into many hours-long phone calls over the next months.

"We started talking about our courtship years ago and all the things that we had done together, and before you know it, we were on the phone three to four hours at a time, four times a week."

Five months of talking over the phone was certainly enough to remind the couple why they enjoyed each other's company in the first place. 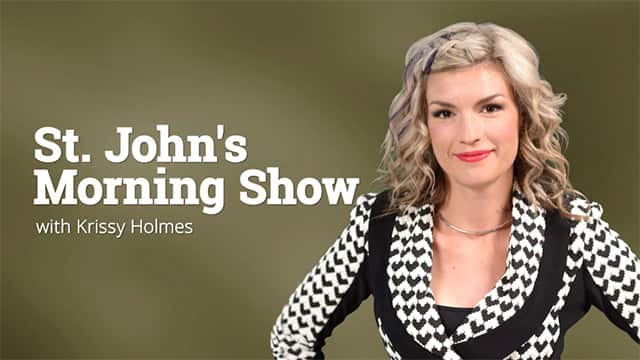 St John's Morning Show10:15A love story seven decades in the making
We hear the story of two lovebirds from the Burin Peninsula who have reunited after a lifetime apart. 10:15

It was in June that Florence suggested she might soon plan a visit to her sons in Ontario — one of whom lives near Fred.

"Florence said … 'I have a son in Georgetown, which is only 10 minutes away from you and I'm gonna come up to see him and maybe you and I can see each other, see if we're compatible or like each other,'" Fred recalls.

Florence, it turns out, is pretty smooth and had a surprise in mind.

She's just an angel dropped out of heaven for me.- Fred Paul

"A few minutes later her son knocked on her bedroom door and said, 'Mom, get your clothes on — we're going over to see Fred.'"

Eager to impress, Fred went out to the garage to track down a box of Newfoundland seashells he wanted to use to spell out "Welcome Florence" in the driveway. While he couldn't track down that box, he grabbed some chalk instead to write the greeting.

"A few minutes later they drove in and I went out and I shook hands with her son, who I had never met before, and I said hello to his wife. I went around the car and Florence was getting out of the back seat, and I gave her a kiss on the cheek and held her hand and walked towards my house," Fred says.

"I knew right away that she had taken my heart back again."

Florence had that same feeling.

"I knew, like he did, that there was still something there after all those years."

The next day, and the days following, the couple got to know each other again, face-to-face this time.

"We started to court. Like, she would come over here during the day to spend a few hours with me and then go back home at night to her son's place in Georgetown," Fred says.

Just days later, the two were talking about marriage.

"We knew right away that we wanted more than just what we were doing — courting. Our kids were all appalled that we were so anxious to get things moving, and you know within less than a week after meeting we were out shopping for wedding rings," Fred says.

'Florence is an angel'

With the COVID-19 pandemic still making everyday life a challenge, the two planned a small wedding ceremony with just family.

On Aug. 8, the two teenage-octogenarian sweethearts were married, and they say life is pretty sweet.

"We do everything together," Florence says. "We just love being here together. He's a very loving person, very caring. And I love every moment I spend with him."

For Fred, Florence was a reason to carry on.

"I was diagnosed with cancer just before Florence came here and I had an operation for stomach cancer, so I think Florence is an angel. She came here knowing what my sickness was. She's just an angel dropped out of heaven for me. I don't know where I would have went without her," Fred says.

"I don't know if I would have gone through the chemotherapy, trying to get better from cancer if I hadn't had the incentive of a love in my life. I think she's wonderful. Just wonderful. And I love her very much."

For now, the happy newlyweds are enjoying their new life together in Ontario.

But they hope to return to their hometown some time in 2021, to enjoy some old memories, while making new ones, in the place they first fell in love.

"The COVID situation up here is not good, as you know, and we want to go back to Newfoundland for a visit maybe in the summer, maybe for a month or so," Fred says.

"My brother has built a cottage on the same foundation that my house was on in Wandsworth and we would like to go back there and maybe spend a few nights in that cottage and live some memories."