Frank Coleman, who was set to become Newfoundland and Labrador's 12th premier in early July, has decided not to take the job after all. 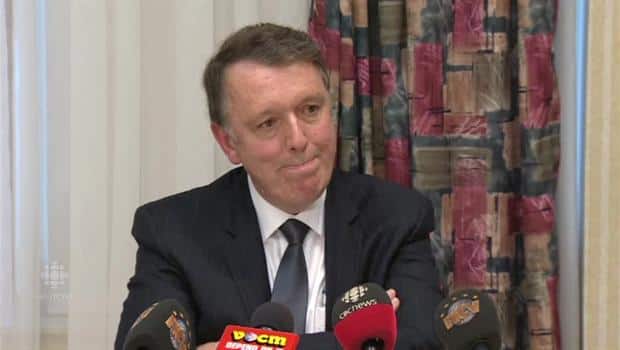 Frank Coleman steps down as premier-designate

Frank Coleman, who was set to become Newfoundland and Labrador's 12th premier in early July, stunned the province Monday by announcing he would not take the job after all.

Coleman told a news conference in St. John's that a serious medical issue had arisen in his family within the past week that made it impossible for him to become PC Party leader and premier. He said he needed to give his immediate family his undivided attention.

"It is with deep regret that I announce today that I am withdrawing," Coleman told the early afternoon news conference.

"A significant and challenging family matter has arisen over the last week that will see me unable to continue on to the convention in July, and hence unable to take the office of premier."

A prominent Corner Brook businessman, Coleman emerged in February as the frontrunner to lead the Progressive Conservatives and become the next premier, several weeks after Kathy Dunderdale resigned.

But he was a relative unknown in political circles and in the public eye, and was quickly criticized for being slow out of the gate with his policies.

Then in late April, CBC reported that a company Coleman ran until February was having trouble paying its bills.

It was later learned that Humber Valley Paving was paid for an unfinished contract on the Trans-Labrador Highway. It was also confirmed that the government could have called in millions of dollars in bonds because the job wasn't finished, but chose not to.

That issue continued to dog Coleman, with allegations of special treatment for him and the company, which he sold shortly before declaring his intention to seek the party leadership and premier's chair.

Premier Tom Marshall, who was poised to hand the reins to Coleman at the party's convention in early July, has since asked the auditor general to look into the Humber Valley Paving controversy.

Marshall said Coleman called him Sunday night with the news.

"I was surprised and I was disappointed, but he gave me his reason ... a profound matter with his family. And he put his family first, which I certainly understand," Marshall said during a hastily-called media briefing.

Marshall said he will honour his promise to stay on until a new premier is installed, but will also keep his word to retire once that happens.

He said the PC Party executive will meet Tuesday night to decide how to proceed with the leadership convention, in light of Coleman's decision.

Within a few hours, the names of several prominent PCs were surfacing as possible replacements, including current cabinet minister Steve Kent and former ministers Shawn Skinner and John Ottenheimer, the latter already confirming he will be in the renewed race.

In an interview with CBC Radio's As it Happens, Kent told co-host Carol Off he is interested.

"I believe that this signals an opportunity for more people to consider their options and step up," he said. "We need a spirited leadership race. I am certainly giving it serious consideration myself, you better believe that. And I suspect that others are going to do the same."

In announcing his decision on Monday, Coleman said he felt bad for leaving the PC party in such a difficult situation, acknowledging, "It has a bad look to it but the circumstances are what they are,"

He also denied his decision had anything to do with the Humber Valley Paving controversy.

"This is personal family matters. My immediate family," he said, declining to elaborate.