'Never forget them': How artist Rod Hand paid tribute to the Regiment 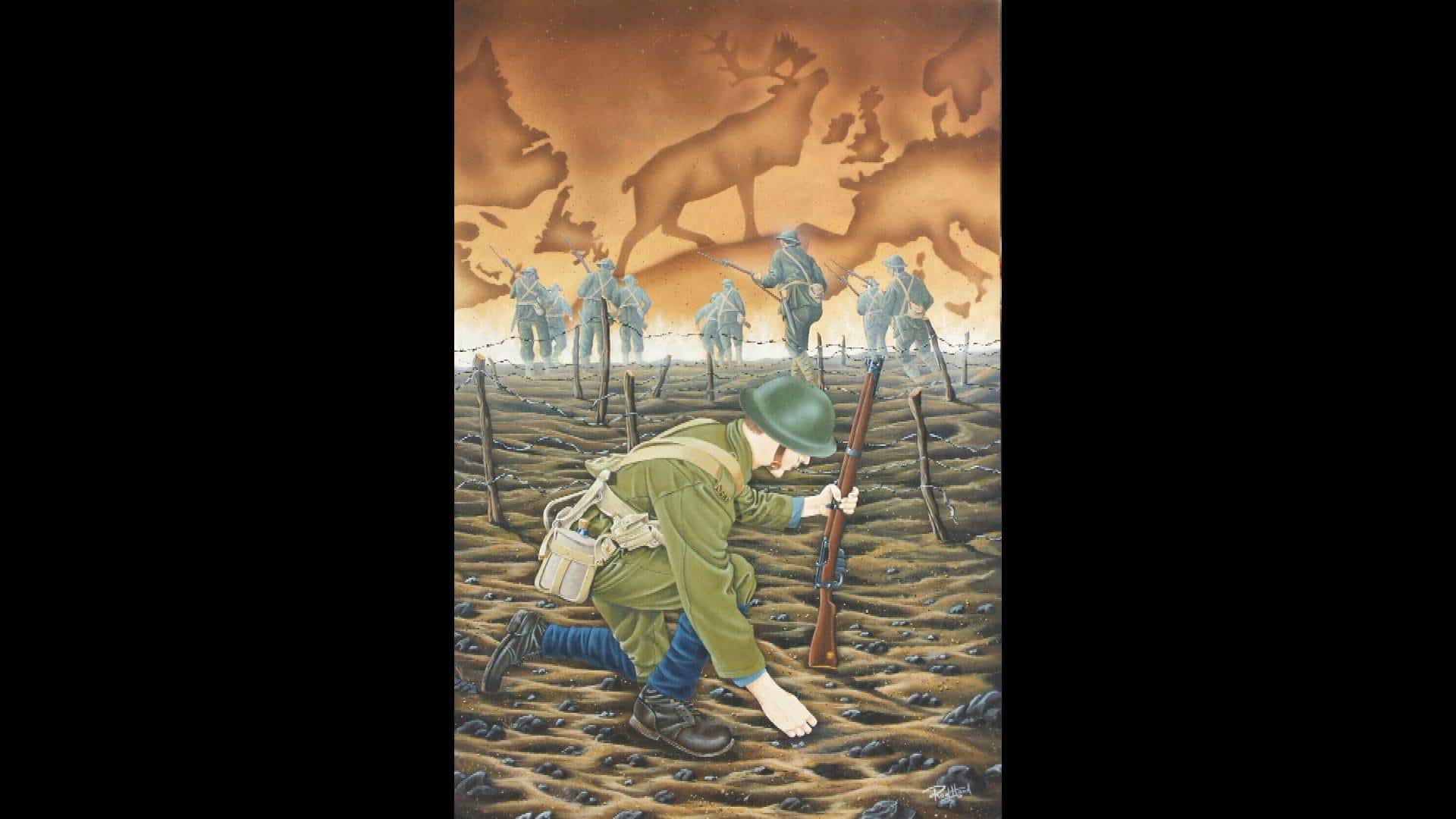 4 years agoVideo
1:00
Rod Hand created a painting inspired by the tragedy of Beaumont-Hamel. 1:00

St. John's artist Rod Hand says creating a painting about Beaumont-Hamel was a deeply personal experience, one that involved research into the tragedy of the Great War and which also brought in elements of his own family history.

The work — titled Forget-Me-Not — is in acrylic and depicts some of the soldiers who went into No Man's Land at Beaumont-Hamel, France, on the opening day of the Battle of the Somme, one of the deadliest days in global warfare.

The painting also shows a soldier holding the flowers for which the painting has been named. Forget-Me-Nots have long been associated as symbols of remembrance for members of the Newfoundland Regiment who lost their lives in the Great War.

Hand spoke with the CBC's Lisa Gushue about the painting.

What was your inspiration for creating Forget-Me-Not?

As this year approached, I wanted to do something to honour those who fought and lost their lives from the Royal Newfoundland Regiment. I started planning the painting last year. I felt a need to express myself through a painting. As we all know, a picture says a thousand words.

Did you have a family member fight in the Great War?

Not in the Royal Newfoundland Regiment, but I have [a] great-grandfather who was [in the] merchant marine. My grandfather, Henry Follett, was a merchant marine on the S.S. Burgeo, which took over the S.S. Caribou run when it was sunk by a German U-boat. Yes, it is (personal)... I have my grandfather's war medals and the flag he was to be buried with.

How long did the process take, from inception to finish?

From start to finish, it was about six months planning the piece and five months to paint it.

Did you begin with a particular photograph or image that resonated with you?

I tried to find the right people to talk to, setting up a model for the front soldier. From the time I realized I wanted to do this, for the first time in a long time I was excited about doing a painting. I've done many over the years, but this one meant something and I put my heart into it. I wanted it just right.

Did you look through archival photos to get a sense of how the soldiers moved in the battle fields?

Yes, I did.  During the seven months prior to painting this, I looked through many photos on the Newfoundland Regiment, until I found the one I used for the soldiers in the background. It was a frame taken from a film shot 100 years ago. The soldier on the far right, it shows him falling as the rest disappear into the smoke. It was a very emotional picture to paint, knowing that these soldiers went through what they had to endure. Very sad.

Was there a part of this project that was challenging for you?

The sky was the part that I kept changing. It was originally supposed to be the Trail of the Caribou map, showing the battles they fought, but I didn't think people would have seen it. So I had to redesign it till I settled on what you see now. I didn't think I was going to be able to finish the piece in time [as] my father passed away with cancer, so I stopped working on it for a while. Here's where it gets emotional for me. My mom called and said there were forget-me-nots growing by my father's shed. They were never there before and no neighbours have them growing. That's when I picked up my brush and started back at it. I felt he was trying to tell me to finish it. I asked my mom to bring me up a small patch of the flowers to grow in my yard. She did. I counted the little flowers and there were 49 of them — the exact number of years they were married.

If you had to sum up this project in a few words, what would they be?