A young Eritrean woman who went missing five years ago is thanking friends and supporters for helping to reunite her with her family. 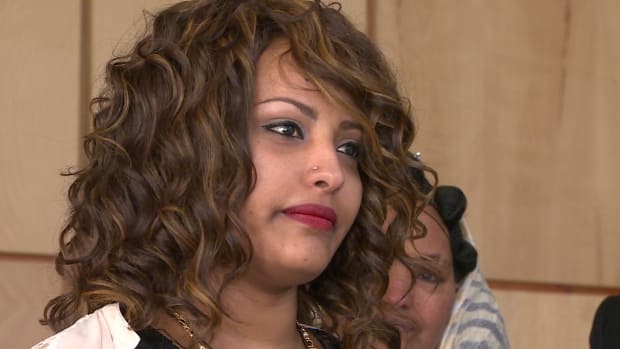 5 years ago
2:45
Selam Measho was reunited with her mother and sisters in St. John's after being separated for five years, reports CBC's Azzo Rezori 2:45

A young Eritrean woman who went missing five years ago is thanking friends and supporters for helping to reunite her with her family in St. John's.

Selam Measho, 21, took to the stage of the West End Baptist Church on Thursday to tell her story of fleeing from a Libyan refugee camp when she was just 16.

Measho described how the camp was burned to the ground and how she was then was fooled by a woman into believing her parents had been killed, flew her to an airport in Holland and then abandoned her at the airport.

From there, she called police, alone and scared in a foreign country.

"One day the Red Cross called me and said 'you must come here,'" she said.

"When I got there, they showed me the picture of my mother. I felt like I was dead and I was just born new."

From Libya, to Europe and then Newfoundland

Little did Measho know but her mother and two sisters had arrived in St. John's as refugees two years ago.

Friends and supporters in Newfoundland and Labrador started a poster campaign that resulted in Measho seeing her mother's picture in a Dutch Red Cross station.

In early April, the family was reunited.

"Everybody shouting and crying, and running," she said.

"I didn't know what to do, I am so happy to be with my mother and my sisters."

For now, Measho will stay in St. John's on a special temporary permit, and her supporters say they won't stop until she becomes a permanent resident.