A house collapsed Friday morning on the outskirts of Portugal Cove as crews doused a fire that broke out before dawn. 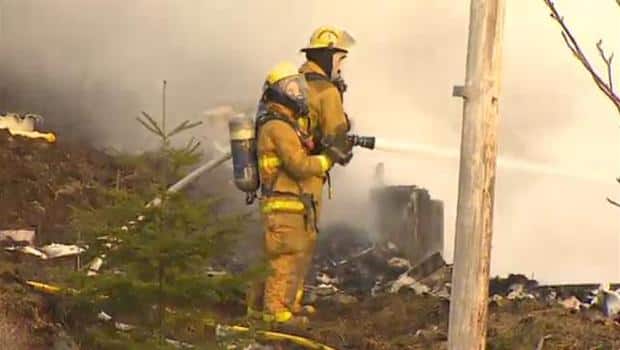 8 years ago
3:24
Bauline Line Extension house fire Friday morning. No one was seriously injured, but two women were taken to hospital to be checked out. 3:24

A house collapsed Friday morning on the outskirts of Portugal Cove as crews doused a fire that broke out before dawn.

The Royal Newfoundland Constabulary is investigating the cause of the fire, and police have identified a person of interest in the blaze.

No one was injured in the fire on Bauline Line Extension, although a woman was taken to hospital for a routine examination.

"As we came around the corner here, of course you could see the glow emanating out onto the road. That was the first thing that [struck] you when you came up onto the scene," said Ian Mercer, the deputy chief of the Portugal Cove-St. Philip's fire department.

"We were looking at approximately 35 to 40 minutes before the building itself collapsed in upon itself."

Crews remained on the scene after the fire was extinguished to handle hotspots.

Mercer said firefighters were relieved that the blaze did not spread to woods nearby.