A crew of divers from Conception Bay South visited the site of a WW II shipwreck on Monday to lay a wreath in memory of the sailors who perished. 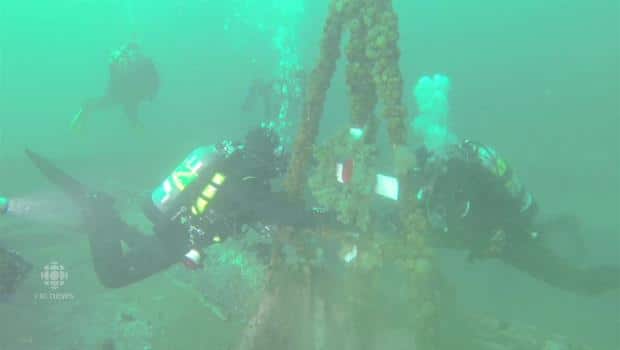 6 years agoVideo
3:03
Footage of a dive crew laying a wreath at the site of WW II shipwrecks off Bell Island 3:03

A crew of divers from Conception Bay South, N.L., visited the site of a Second World War shipwreck on Monday to lay a wreath in memory of the sailors who perished.

The divers were with Ocean Quest, a company that hosts underwater tours around Conception Bay.

A wreath was laid in the underwater ceremony at the site of the Bell Island shipwrecks, just off the St. John's area, where 29 men were killed when a German U-boat sank the SS Saganaga and the SS Lord Strathcona in 1942.

Click above to check out video from Monday's underwater ceremony, provided by Antoine Grégoire and Ocean Quest.