Julia Holman-Price didn't expect that when she started a job that paid more than $50,000 a year, she would end up wishing she was still earning $13 an hour. 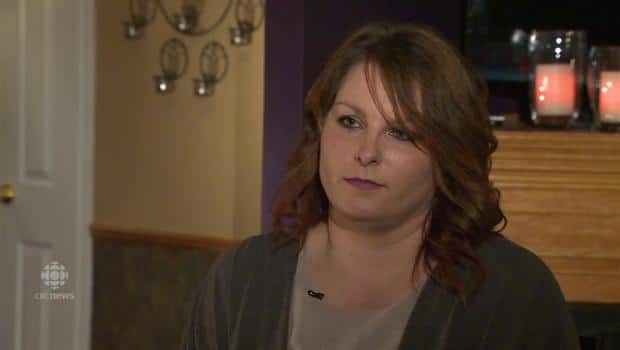 6 years agoVideo
2:30
Julia Holman-Price says she can barely pay the bills because daycare costs are so high 2:30

Julia Holman-Price didn't expect that when she started a job that paid more than $50,000 a year, she would end up wishing she was still earning $13 an hour.

Holman-Price is a single mother with two girls, 11 and 5. Five years ago, she left an abusive relationship and was working her way out of debt with a job that paid just above minimum wage. She also had a full daycare subsidy, a generous baby bonus, and Rotary housing that cost $300 a month.

"Carefree, no stress. Get up and go to work, come home and play with the girls," said Holman-Price about what her life was like back then.

Things changed, surprisingly and unexpectedly, when she got a job that doubled her income overnight. She lost her housing and baby bonus. Her daycare subsidy became non-existent.

Now, the bills are piling up and outings, birthday parties and movies for the girls don't happen any more.

Holman-Price said the daycare subsidy system needs to be revamped because it's not on par with the cost of living right now. She said she thinks the last time it was adjusted was 10 years ago.

"Bills are increasing, the cost of living is increasing, and it's just stuck. The income barrier where you qualify for support is based on the 90s," she said.

"I don't want to live off the government, but I mean you need to be able to go and make an income to support yourselves, and child care is essential. You can't have a five year old coming home by themselves. They need to be in daycare."

She pays $900 a month for part-time daycare for one child, and makes alternate arrangements for the older child, since she can't afford another $900. Daycare costs amount to a third of her income.

"It backfired. Because right now, we're in the position where it comes down to looking at the income every month going, 'You know what? I'm better off making $13/ an hour. I'm better off getting subsidized for housing, sporting [lessons]  everything.'"

Holman-Price said it's led to some tough decisions.

"Literally, to go out to buy groceries is deciding if the heat and light's going to be paid. The bare necessities with heat, light, daycare, the roof over our head and a car to and from work takes up 100 per cent of my income. Extras as in groceries, gas, clothing, medication is non-existent," she said.

"So it's literally deciding which bills are racking up, and which services are going to be cut off, so you can provide the necessities."

Holman-Price said when it comes to daycare, subsidy caps need to be increased, and subsidies need to become more readily available for working parents.

"Debt, debt, debt and more debt. There's times like I said that I've contemplated quitting where I am, just to make it easier … I'm not to the point that I've ever had to quit my job to go on social services, but a lower paying job at the end of the month would have us coming out on top," she said.