Danny Williams says Harper needs to be pushed on trade

Ottawa insists it is not forcing N.L. to drop fish processing rules in return for financial support for Muskrat Falls, while a former premier is wading into the dispute. 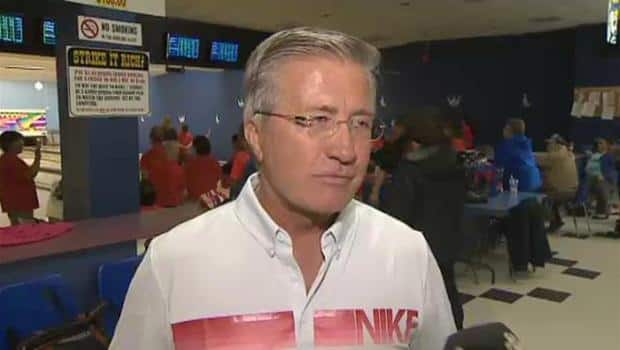 8 years ago
3:50
The former premier talks about Special Olympics, and Kathy Dunderdale's skirmish with Ottawa 3:50

The federal government insists it is not forcing Newfoundland and Labrador to drop fish processing rules in return for financial support for Muskrat Falls, although former premier Danny Williams says his successor has a good reason to take the issue public.

Premier Kathy Dunderdale told a St. John's business audience this week that federal officials have been pressuring the province to drop minimum processing requirements, as the federal government pursues a trade deal with the European Union.

Dunderdale said that in late November, Prime Minister Stephen Harper's office tried to connect its loan guarantee for the Muskrat Falls hydroelectric project to the government's fisheries policy, which forces companies to process seafood close to where it is landed.

Williams told CBC News that while he cannot pass judgment on whether Dunderdale should be openly talking about a dispute with the PMO, he said his own experience shows it may be a useful approach.

"I found the only way to deal with Stephen Harper was to flush him out," said Williams, who was known for fiery battles with Harper, including the "Anything But Conservative" campaign that Williams waged during the 2008 federal election.

"From my own perspective, you need to put what he's saying and doing right up on the table. That's a great way to deal with him, as far as I'm concerned," he said.

The ABC campaign five years ago resulted in the federal Conservatives being shut out of Newfoundland and Labrador's seven seats.

Dunderdale has adopted a friendlier tone with Ottawa since taking over when Williams retired in late 2010, but this week she showed frustration with federal tactics.

Dunderdale said she slammed down the phone on the prime minister's former chief of staff at the end of the negotiations on the loan guarantee for Muskrat Falls, a multi-billion-dollar hydroelectric megaproject that will pipe power from central Labrador to Newfoundland and then the Maritimes.

'No linkage between these two issues'

Jack Harris, the New Democratic MP for St. John's East, raised the issue Tuesday in the House of Commons.

Harris said the federal Conservatives "tried to force the province to concede fish-processing rules in the EU trade deal in order to keep that promise, and days before Nigel Wright resigned, he was pushing the issue with the premier of Newfoundland and Labrador."

International Trade Minister Ed Fast denied the claim that the Conservatives were prepared to hold up Muskrat Falls — the first part of the larger Lower Churchill hydro plan — to have the minimum fish processing requirements eliminated.

"The member has it all wrong. There is no linkage between these two issues," said Fast.

"Our government is proceeding with the Lower Churchill project. In fact, we just issued the request for financing for this very project," he said.

Canada has been pursuing the Comprehensive Economic Trade Agreement (CETA) with the EU, which Fast described in Parliament as "an ambitious trade agreement [that] would be of significant benefit" to the country, including Newfoundland and Labrador.

"In fact, we are seeking a very high-quality fish and seafood package for Canada, and we are committed to achieving an outcome that would open up new opportunities for Canada's exporters," Fast said.

'Hinges off the doors' already?

But Gus Etchegary, a retired fisheries executive and a well-known advocate for Newfoundland and Labrador's fishery, said he believes that Dunderdale has already caved on protecting fish processing rules.

He noted the provincial cabinet allowed a controversial exemption to St. John's-based Ocean Choice International, which is shipping unprocessed yellowtail flounder for processing in Asia in return for investing in a plant in Fortune.

"Other countries are processing what should be processed here in Newfoundland, and this is precisely what the free trade negotiators wanted from the beginning," Etchegary told CBC News.

"We have to stress that the government of Newfoundland opened the doors. They took the hinges off the doors."