Daniel Benoit remembers everything from that summer night when he was four years old, from the layout of his home to the way his mother screamed as the monster — called dad — brutally killed her.

Daniel Benoit was 4 when his father woke him up, forced him to watch mother being beaten to death 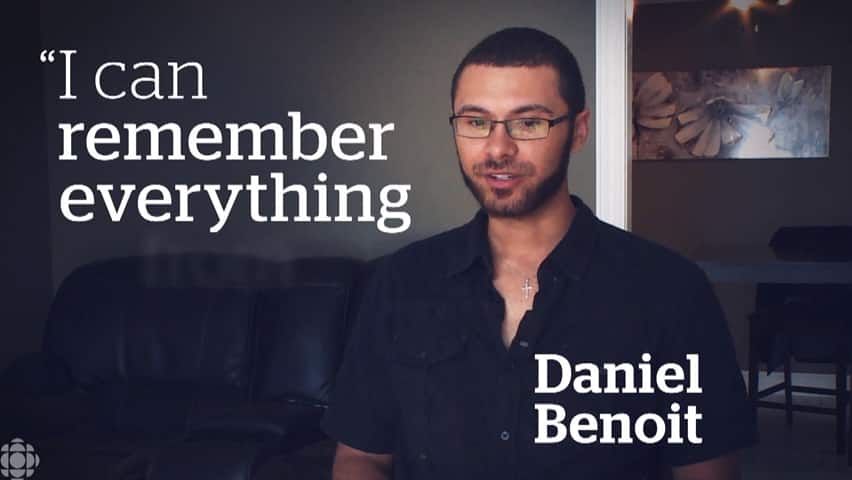 4 years ago
1:40
A young man from the west coast of Newfoundland is expressing his concern over the release of his father, Dale Ogden, from prison. Ogden killed his wife with an axe in 1997, in front of the couple's three-year-old son, Daniel Benoit. 1:40

Daniel Benoit remembers everything from that summer night when he was four years old, from the layout of his home to the way his mother screamed as the monster — called dad — brutally killed her.

In the kitchen, Benoit's girlfriend cuts up a grilled cheese sandwich and puts pieces on the high chair for the couple's young child.

Benoit looks straight ahead, relaxed, wearing jeans and a T-shirt, while he shares a story of family horror.

"He did not just commit the murder, but wake your son up to witness this murder, that's not a human, that's a monster."

The story, the nightmare

The two were separated at the time, and Judy was afraid of her husband, who had a history of violence.

She lived in Port au Port West, on Newfoundland's west coast, with her son, Daniel, and 14-month-old daughter.

Judy and Dale were headed for divorce, and he was under a court order to stay away from her.

He is not my father. I don't want anything to do with him.- Daniel Benoit

Despite the order, Ogden would leave his house in Kippens and drive past his family's Port au Port West home. Judy Ogden would call the police, but was told there was nothing they could do.

Benoit said his mother barred up the windows and doors, but one warm night in July 1997, Ogden managed to force his way in and beat Judy Ogden to death.

Ogden shattered his wife's nose with his fist and beat in her skull with the back of an axe, but not before waking up his son — Benoit — and making him watch it all.

Ogden was convicted of the second-degree murder of his wife, sentenced to life and sent to prison in February 2000.

He had faced theft, extortion and assault charges long before his murder trial. At sentencing, Judge Gail Welsh could have given him more time, but she chose to set parole at 14 years. He could have been sentenced to as little as 10.

At the time, the children were put in child protection services. While his father was in jail, and with his mother dead, Benoit had to grow up fast.

Today, he has a girlfriend, a baby, a nice house and a good job offshore — and he wants to keep all of it away from Ogden. He uses his mother's maiden name, Benoit.

He has gone into major protective mode and wants to stay as far away as possible from his father.

Dale Ogden has been out on day parole since September, after being released from William Head Institution. He is currently living in a halfway house on Vancouver Island.

"No matter how many years go by, or how many personal development courses, your behaviour in jail could just be a coverup," said Benoit.

"It's not just going to change the face of the things you have truly done."

I can remember everything from the way that the house was, to the how it went down, to the screams.- Daniel Benoit

Last year, Benoit filed an application as a victim under Correctional Service of Canada so he could receive information on Ogden's whereabouts.

He even wrote a victim impact statement that was read aloud at Ogden's parole hearing.

It took him weeks to write the nightmare down on paper.

"I can remember everything from the way that the house was, to how it went down, to the screams, even to what happened after everything was done," said Benoit.

"It haunts you. I'm 22 years of age now, and I still have nightmares about it. It's too much for one person to handle."

Benoit suffers from post-traumatic stress disorder, which was triggered when he wrote the victim impact statement.

But reliving the nightmare to produce the statement did nothing to keep Ogden behind bars. His parole was granted.

"I am afraid, I'm not going to lie. Most people would try and deny it and say they are strong, but I'm pretty scared," said Benoit.

"It's just knowing what he [did] and what he's capable of doing … he was an abusive man. I still remember that. I can only call him a monster. No matter what you do, you are not going to change what's inside. Who's to say when he gets out, and no one is watching, what more is he capable of doing?"

There were rumours that he said in prison that he was saying he was going to get his kids back.- Daniel Benoit

Benoit went so far as to request a current picture of the man, so he could be on lookout. His request went unanswered.

He also filed a geographic separation request with Correctional Service of Canada to keep Ogden out of Newfoundland and Labrador.

Benoit's fear is that, despite that order, Ogden could still show up on his doorstep — and after one scare, he wants Correctional Service of Canada to do more.

On Sept. 30, Benoit received a call from officials saying a warrant had been issued for his father's arrest because police could not confirm his location.

That sent Benoit and his family into disarray, thinking the man was on his way to Stephenville — to their home.

"My family was in a panic, thinking he could have been coming this way, and he was caught. I had to call the national monitoring centre in Ottawa to get the answers that should have been provided to us as soon as he was in custody," he said.

"It totally floors me, because I think that the families of the victims should have the right to this information, because it is our lives now. And nowadays the families and the victims are serving the life sentence, and the offender has another chance at life to walk a free man."

Benoit believes he wouldn't be as fearful if Correctional Service of Canada were more transparent.

The service told CBC News that its rules about privacy mean it is unable to share photos of an offender, or provide specific information about an offender's status.

'He is not my father'

"There were rumours that he said in prison that he was saying he was going to get his kids back," said Benoit.

"He is not my father. I don't want anything to do with him."

Benoit is quick to point out that Ogden didn't ruin his life. His mission is to be the complete opposite of the man he calls the monster.

But his pure frustration lies with the justice system.

"It's a joke. The more of this that goes on, the more crime is going to take place. People are going to see the truth behind it," said Benoit.

"They are not frightened by the justice system anymore — there is no justice system. When people see this, they say, 'Well, I can do what I want now. I'll get a slap on the wrist or I'll be out in a few years.' If they don't have anything to live for now as it is, what's stopping them from committing a crime?"

Benoit said he will continue to contact the parole board and Correctional Service of Canada, requesting a recent picture of Ogden — a picture that will show how much or how little they look alike.

Benoit may look just like the man he calls the monster, the man that took his mom. But he's nothing like him.

After he shares his story, Benoit feeds his baby lunch. He hugs his girlfriend. And he waits for more answers about Ogden's whereabouts.