Three cyclists completed 'Hillary's Ride,' a cross-country ride on Saturday in an effort to raise awareness about mental health issues and suicide. 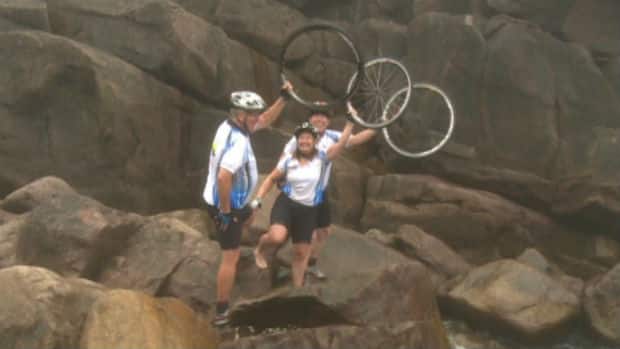 Three cyclists completed a cross-country ride on Saturday in an effort to raise awareness about mental health issues and suicide.

The trip, called 'Hillary's Ride,' was in memory of 20-year-old Hillary Werthmann, who died 10 years ago. Her father was one of the riders who pedaled to Canada's most easterly point.

Bill Werthmann, from Edmonton, has been cycling almost every day since early May with Terry Fannon and Sue Sohnle, and he said when it got tough and he felt like giving up, a photo of his daughter kept him going.

"There were times I really, really relied on it," Werthmann said. "Some of the hills coming through the mountains, I would just look down and I would be ready to give up and I would look down and say, 'No, this is for you.'"

Werthmann said his daughter took her own life by swallowing a lethal dose of pills.

"Hillary died of suicide. She was suffering from depression for a couple of years, and unfortunately she didn't get the help that she needed quickly enough," he said.

According to Werthmann, he started the trip in order to help raise awareness to get help for other individuals and families deal with mental health problems.

He said the trip from the Pacific to the Atlantic Ocean has already been a success.

"We know for sure that some people have come to us and said, 'I've never talked about this before ... I will talk about it moving forward,'" Werthmann said.

"All we needed was one person to say that and that made it a success."

The riders are taking some well-earned time off, but Werthmann said they will keep working to help families dealing with mental health issues.