A couple in St. John's say some of their best jewelry went missing when they used a professional moving company in New Brunswick that advertised a policy of background checks for employees, but ended up hiring someone with a criminal record to help do the job. 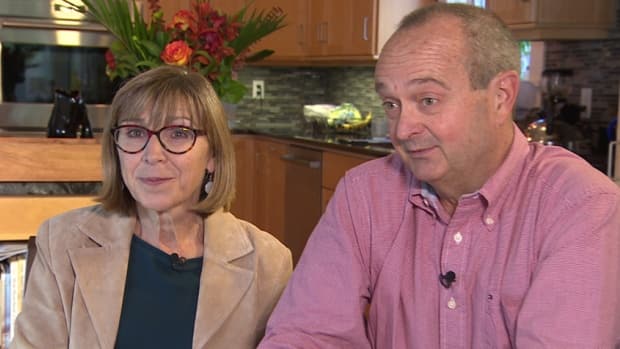 5 years ago
3:22
Couple shocked to find moving company employee with criminal record sent to their home 3:22

A couple in St. John's say some of their best jewelry went missing when they used a professional moving company in New Brunswick that advertised a policy of background checks for employees, but ended up hiring someone with a criminal record to help do the job.

Lydia Lewycky and Tom Horrocks say the moving company has washed its hands of the situation, and is refusing to compensate them.

Premiere Van Lines declined comment when contacted by CBC News. But the company told the couple that two separate investigations found no proof the employee in question stole the items.

The drama began two years ago, when Lewycky and Horrocks hired Premiere to move the family household back to St. John's from Fredericton, after 30 years living away from Newfoundland.

He stressed that a key consideration was the company's vetting of workers who would be in their home.

"They indicated to us that there were security checks done on their employees, and they were bonded, and the typical things that you'd look to have, to have movers come into your house and move your prized possessions," Horrocks said.

According to Lewycky, the couple decided to take the family jewelry in their car with them as they made the journey from New Brunswick to Newfoundland.

But they left the box containing the jewelry in their bedroom, unattended, for a few hours on the morning of the move as the movers did their work. Around noon, they taped up the box and put in in their vehicle, where it stayed until they arrived in St. John's.

They didn't have the chance to open the box until a week after they arrived.

That's when Lewycky says she discovered there were three pieces missing — a diamond ring Horrocks bought for their 20th anniversary, a pearl necklace he bought in Spain, and a pearl bracelet.

"I couldn't believe it," Lewycky said. "I kept opening and closing the box, and then I went to the box that the ring was in and it was empty too. And I was absolutely shocked."

The couple says the missing jewelry is valued at more than $17,000.

In the end, he said, Premiere refused to pay any compensation because the company had not been hired to move the box that contained the jewelry.

Horrocks and Lewycky also went to the Fredericton police, who interviewed two employees of the moving company.

It turned out that one of them had been in trouble with the law before.

CBC News has uncovered court records which indicate that employee has a criminal record for a series of assaults and thefts dating back to 2003.

In 2009, he was convicted of assault causing bodily harm for his role in a violent series of muggings after closing hours near a Fredericton nightclub, and sentenced to a year imprisonment.

But four years later, he was on the work crew in Horrocks and Lewycky's house, helping move their belongings.

The couple believes he is responsible for the missing jewelry.

Fredericton police investigated, but no charges were ever laid.

According to the Premiere Van Lines website, the company offers a "no stranger in your home" guarantee.

"As an agent for Atlas Canada, Premiere's goal is to provide our customers with total 'peace of mind' and a superior moving experience," the website notes.

"This program extends to our moving consultants, professional van operators, packers/unpackers and loading and unloading crew members," the website advises.

Premiere Van Lines declined to be interviewed for this story.

But in an email to Lewycky and Horrocks earlier this year, the company confirmed that one of the employees in their home that day did not have a background check.

However, the company says both the police and its insurance company investigated, and neither turned up evidence that the employee stole anything.

'A lot less trusting than I was'

Lewycky and Horrocks are angry at the employee they suspect stole the jewellery, but feel betrayed by Premiere Van Lines.

The couple is unhappy the moving company hasn't taken responsibility for what happened.

Lewycky said she is now uneasy at the thought of letting people into their home.

"I'm a lot less trusting than I was, and I think that's really unfortunate," she said.