Protesting fishermen dumped about 30,000 pounds of unprocessed crab into the ocean at a plant in Hickman's Harbour on Random Island Monday. 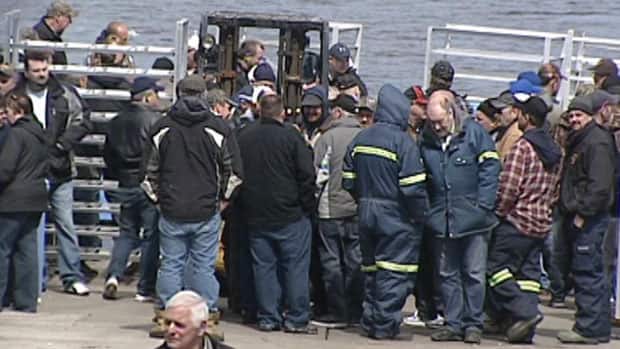 Protesting fishermen dumped about 30,000 pounds of unprocessed crab into the ocean near a plant in Hickman's Harbour on Random Island Monday.

About 200 of the fishermen showed up outside the Golden Shell Fisheries plant in the Trinity Bay community at about 7 a.m. and blocked workers from going inside.

RCMP said the protesters then entered the plant, and stated no crab would be processed on Monday.

Police said the fishermen started removing crab from the plant and throwing it off the wharf and into the water.

Most fishermen in Newfoundland and Labrador have refused to set their crab pots this season because they're upset about the price being offered for the lucrative shellfish.

That's left most plants without any crab to process. However, Golden Shell Fisheries bought its 30,000 pounds of crab, landed on Newfoundland's west coast, for processing.

Gilbert Penney, a representative of the Fish, Food and Allied Workers' Union, was at the protest. He said the fishermen want Golden Shell to stop buying crab until the price dispute is settled.

Penney went on to warn that fishermen would protest at any plant that buys crab under the current price structure.

"If you're processing crab in this province, don't be surprised if you don't have the same crowd on your parking lot tomorrow morning," said Penney.

Meanwhile, Jim Hughes, the lawyer for Golden Shell Fisheries, said his clients were very upset and described the incident to him as "unruly."

"They [the fishermen] may have disagreed that it [the crab] should be processed, but at the end of the day they had willing fishermen willing to sell them product," said Hughes.

"They bought the product, they moved it to the plant, they had workers that wanted to process it, that were ready to process it, and these people just went in and changed it all by heaving it over the side of the wharf."

He said the fish plant owners are planning civil court action to recover their loss.