Members of the Canadian Armed Forces arrived in Newfoundland and Labrador on Sunday evening after a blizzard hit the province Friday.

Members of the Canadian Armed Forces arrived in Newfoundland and Labrador on Sunday evening after a blizzard hit the province Friday.

Video posted to Twitter by Joint Task Force Atlantic showed troops on the ground amid renewed snowfall. Minister of National Defence Harjit Sajjan said there would be between 150 and 200 people on the ground by the end of the day — a number which could swell to 300 by Monday.

Troops have arrived in Newfoundland and are ready to aid the province following an unprecedented snow storm that prompted a domestic @cafoperation <a href="https://twitter.com/hashtag/OpLENTUS?src=hash&amp;ref_src=twsrc%5Etfw">#OpLENTUS</a>. <br><br>We stand with Canadians in their time of need. Your community is also our community. <a href="https://t.co/2ax2R9GOou">pic.twitter.com/2ax2R9GOou</a>

Sajjan, speaking at a media conference in Winnipeg, could not comment on what exactly the service members would be doing, saying that decision will be made by experts in the community.

"[The response] will be needs driven on the ground," he said, adding that the military would not be seeking to recover costs for their services.

Canada's military is arriving in Newfoundland to help the province dig out, following a monster blizzard. As many as 300 troops will be on the ground Monday to help with the clean up.<br>We <a href="https://twitter.com/CBCNews?ref_src=twsrc%5Etfw">@cbcnews</a> speak to Rear-Admiral Craig Baines on where troops will be deployed: <a href="https://t.co/tXmBjXe945">pic.twitter.com/tXmBjXe945</a>

Public Safety Minister Bill Blair, speaking at the same news conference, said the federal government is working with the province on how to pay for other aspects of the cleanup.

Newfoundland and Labrador Premier Dwight Ball said an emergency operations centre will open to centralize requests for help from residents. Soldiers will be available for residents who need assistance with snow clearing and other support.

He said a "high volume of calls" is expected.

"We just want to help people now clean up and clear out ... so emergency workers can get to them," Ball told CBC's radio special on the storm Sunday afternoon.

Watch: For some, all that snow means fun 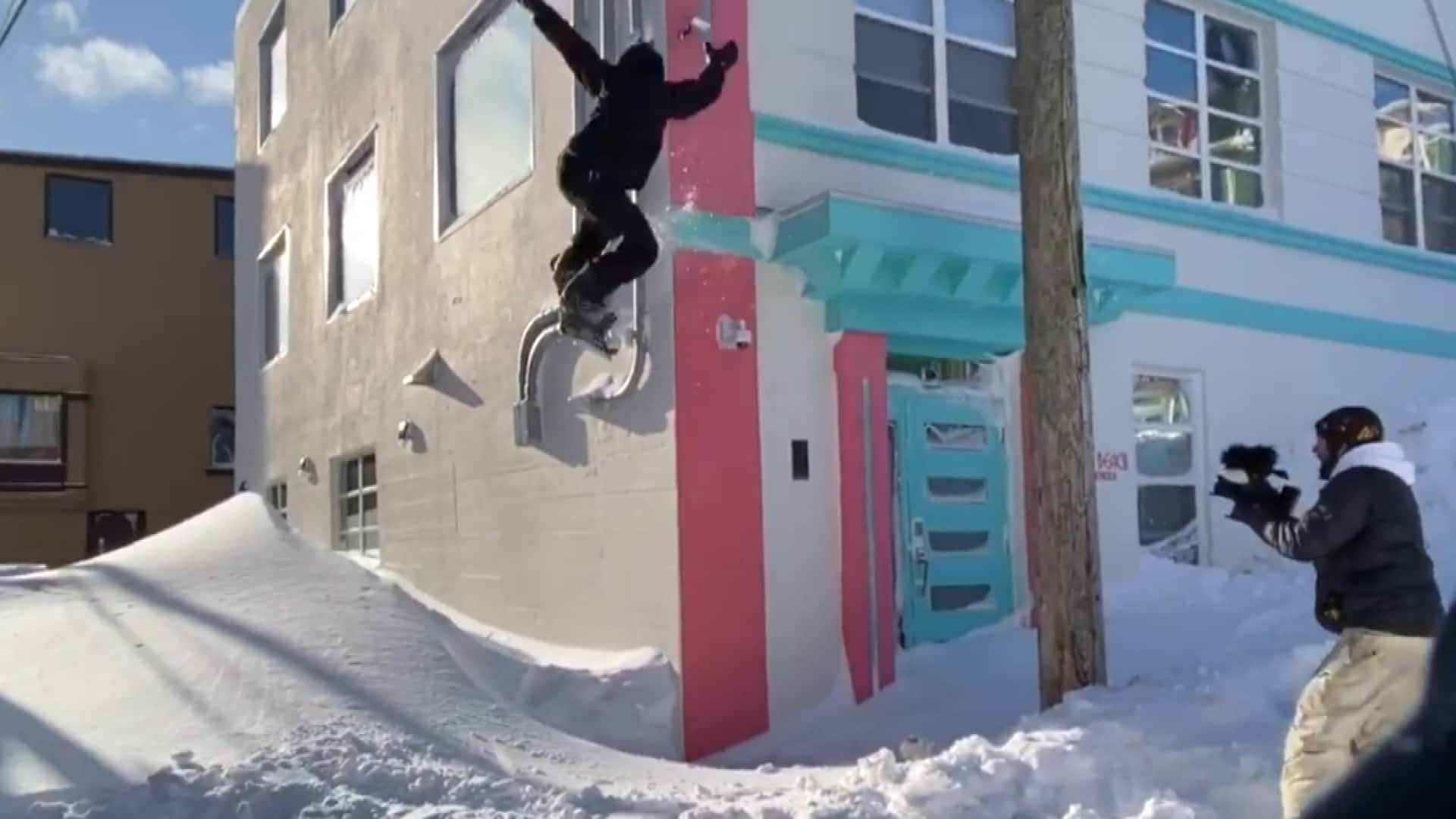 Snowboards and street parties: Making the most out of an epic storm

1 year ago
2:29
Newfoundlanders are facing a full day of shovelling after Friday's record-setting blizzard, but some St. John's residents aren't letting that stand in the way of a good time. 2:29

Newfoundlanders are facing a full day of shovelling after Friday's record-setting blizzard, and there is more nasty weather to come.

St. John's set a new one-day snowfall record on Friday of 76.2 cm, beating the previous record of 68.4 cm set back on April 5, 1999, according to Environment Canada. Meanwhile, 93 cm fell in Mount Pearl and 91 cm fell in Paradise.

Earlier Sunday the federal weather agency issued weather warnings and statements for much of the island, except for the west coast and northern peninsula.

Central Newfoundland is under snowfall warnings and there are winter storm warnings on the south coast. Upwards of 20 to 25 cm of snow is possible, according to CBC Newfoundland meteorologist Ashley Brauweiler.

For eastern Newfoundland, 10 to 15 cm is likely, with some areas seeing upwards of 20 cm. In the early morning hours Monday, that should change to drizzle for the metro area, but southern areas on the Avalon will see between 5 and 15 mm of rain, she said.

Winds could whip up to between 80 and 90 km/h overnight in eastern Newfoundland.

"It's unbelievable when you think about it," Ball said of the coming second wave of snow.

Municipalities throughout the area have declared states of emergency, which restrict residents' movements to allow snow-clearing operations to carry on unimpeded.

Residents who are running low on supplies will have few options in St. John's, where a state of emergency will remain in effect on Monday.

The city said pharmacies are not permitted to open Monday, revising its statement from earlier on Sunday regarding the state of emergency "given the current weather conditions and the addition anticipated snowfall [Sunday] evening."

Snow-clearing contractors are permitted to carry out their work, and gas stations may open to provide emergency fuel needed for snow removal, the city said in a statement.

Garbage and recycling collection will not proceed Monday, the city said.

A spokesperson for the city of St. John's said the city expects businesses to honour the state of emergency amid reports some businesses not covered under the exceptions have been opening.

She said the city can charge anyone in violation of the state of emergency order, with a penalty of up to $5,000 if convicted.

Even with the easing of some restrictions, the city is still advising people to "stay in and off city streets."

John Haggie, the province's health minister, advised residents needing prescriptions to call their local pharmacy to make sure it's open and that a refill is available. He noted, however, that any pharmacy in the province is able to dispense a prescription no matter which pharmacy it was first brought to.

Haggie also advised residents who may be concerned they are having a medical issue to call the 811 health line to get advice before calling 911 or trying to venture to a hospital.

"The roads are not entirely safe," he cautioned.

The Town of Paradise, 20 kilometres west of St. John's, announced Sunday that it will temporarily lift its state of emergency between 6 a.m. and midnight daily, effective Monday.

Starting Monday, "and until further notice," all businesses must close by midnight daily and no vehicles are allowed on roads between midnight and 6 a.m. to allow for snow-clearing operations, a statement from the town said. Only town snow-clearing equipment, emergency vehicles, essential workers getting to work and private snow-clearing contractors are allowed to be on the roads overnight.

"We ask all residents to stay home unless absolutely necessary," the statement goes on.

The town of Conception Bay South, 36 kilometres west of St. John's, lifted its state of emergency at 4 p.m.

Watch as neighbours in CBS stay connected through a snow maze 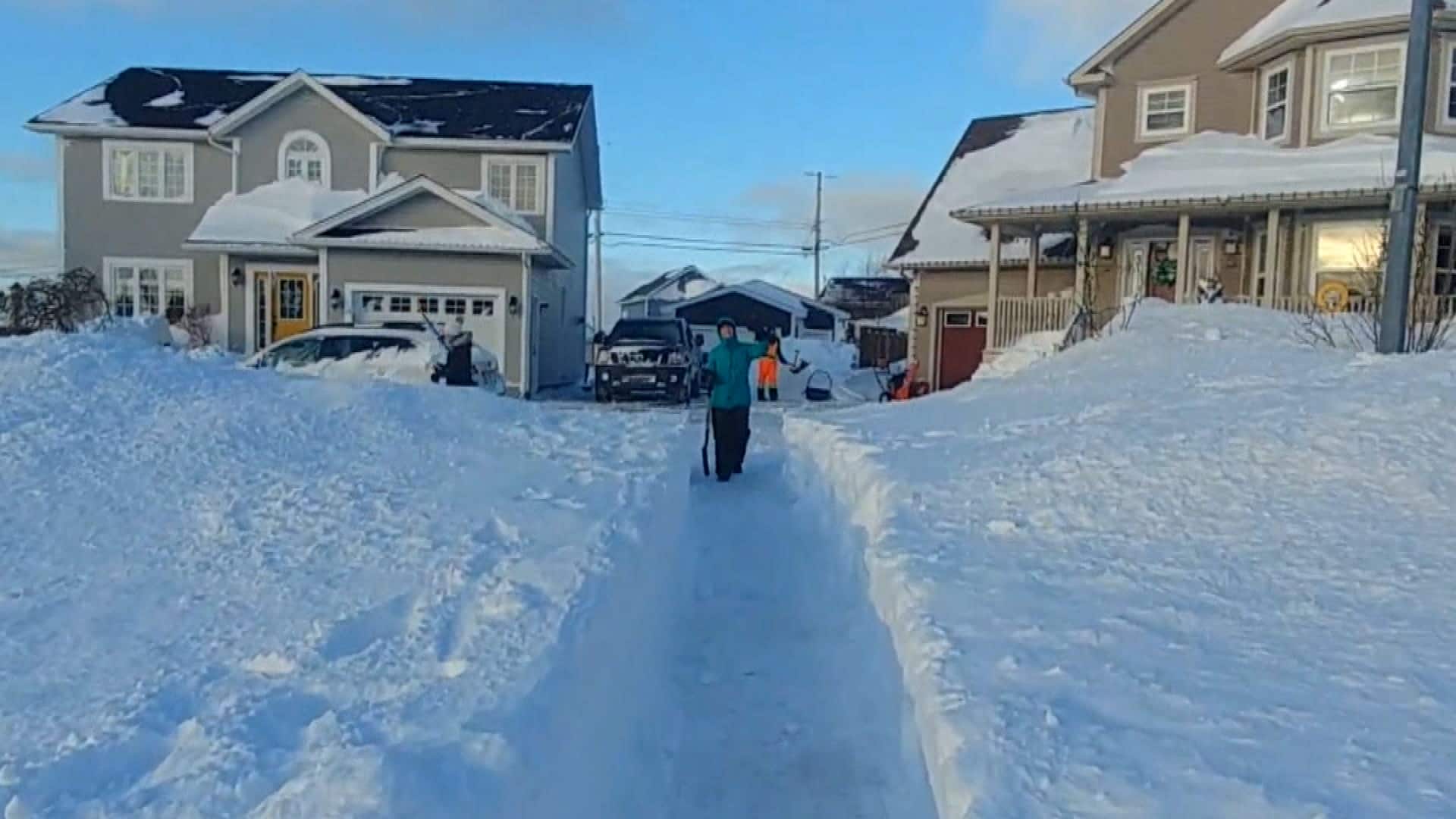 1 year ago
0:29
'This is how a close-knit neighbourhood stays connected,' says Wally Meade, showing off his local cul-de-sac maze in Conception Bay South, N.L. 0:29

Pharmacies in the town will be able to open immediately. A warming centre is also open at the Salvation Army church until 9 p.m.

Residents were allowed to travel to pharmacies and to the warming centre before 4 p.m.

The Town of Torbay also plans to lift its state of emergency between 6 a.m. and 9 p.m. effective Monday.

Before then, several exceptions are in place, including allowing private snow-clearing operations, the delivery of oil to homes and the movement of essential workers, among other accommodations.

Meanwhile, in Portugal Cove-St. Philips, a state of emergency will go back into effect at 9 p.m.

St. John's Mayor Danny Breen said while crews have had a lot of success and worked through the night, there's still a lot to be done.

"There's a tremendous amount of snow on the ground," he told CBC News Network on Sunday morning. 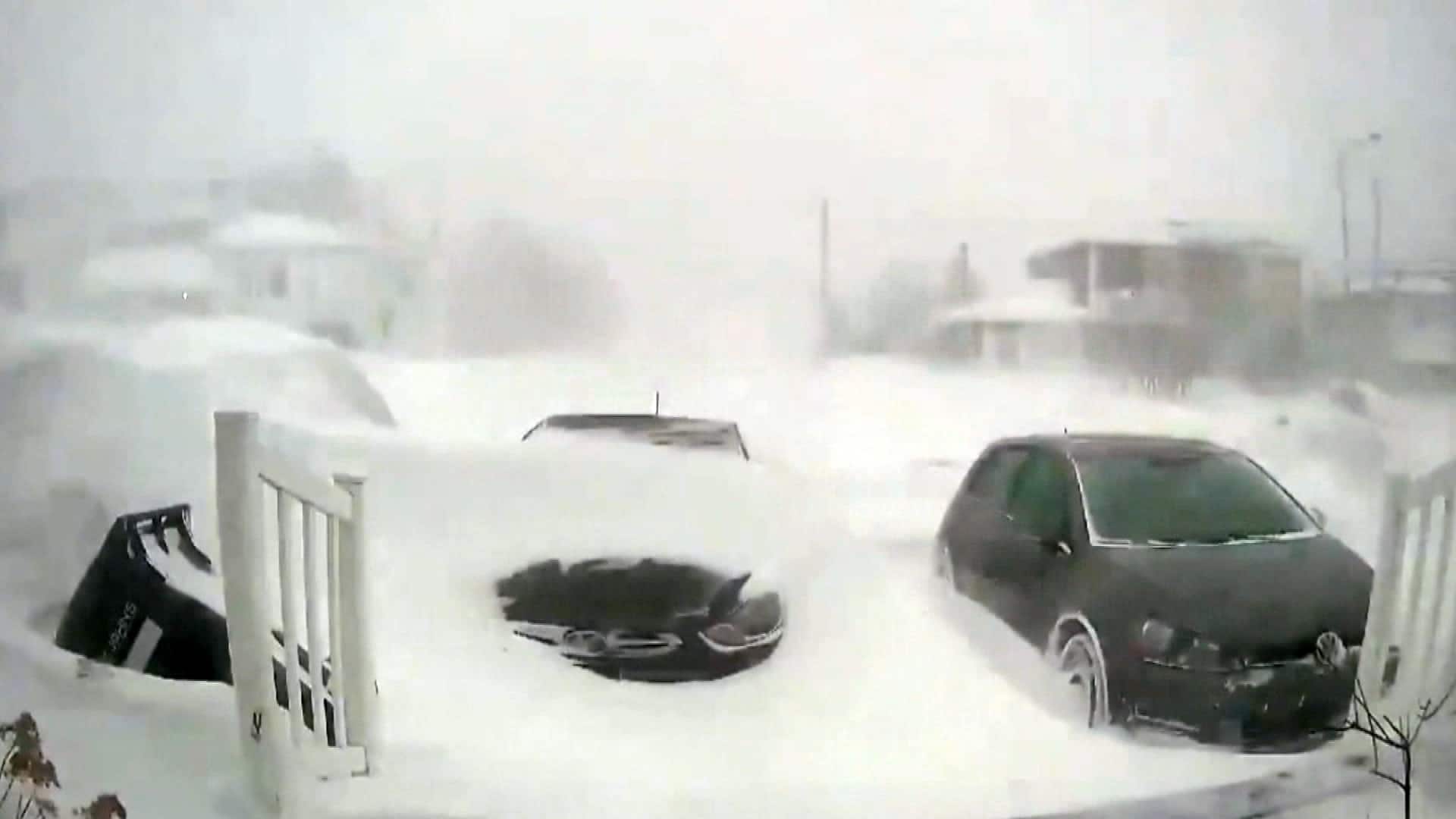 A look at the record-smashing blizzard in Newfoundland

1 year ago
1:16
The massive storm beat a 1999 snowfall record, shutting down whole portions of eastern Newfoundland. 1:16

Breen said a series of storms has had snowplow operators working steadily since Christmas Eve and said they are getting help from Corner Brook as well as from other levels of government.

Most major thoroughfares have been widened, he said, with many streets at least having "one cut" through them.

But the goal remains clearing roads for emergency vehicles and allowing private snow-removal contractors to service their clients so businesses can eventually reopen.

"Right now, the streets, we don't feel that they're in a condition that's suitable enough to open up the city tomorrow," he told the CBC radio special on Sunday afternoon.

Asked about criticism that the city seemed under-prepared for the massive storm, Breen said there are three things to note: the high volume of snow, the rate at which the snow fell and the high winds, which at times reached up to 150 km/h.

"So this was a storm that would have been challenging for any operation," he said.

The province announced that all government offices in the St. John's metro area will be closed Monday. 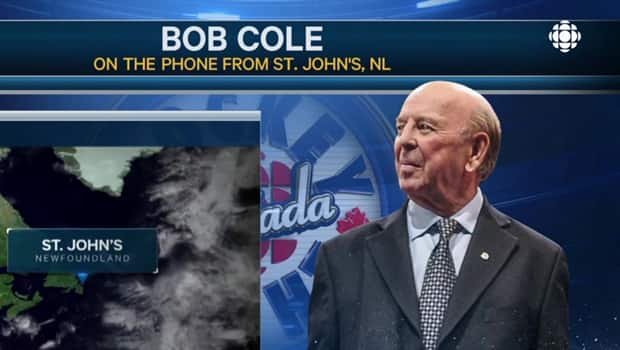 1 year ago
1:46
Retired broadcaster Bob Cole returned to Hockey Night in Canada to provide an update on the blizzard that enveloped his home province of Newfoundland and Labrador. 1:46

Meanwhile, Memorial University has announced that its St. John's, Marine Institute and Signal Hill campuses will remain closed on Monday "to facilitate cleanup from Friday's blizzard." The closure includes all evening classes and activities, and the child-care centre.

The closure means access to university buildings is restricted, according to a statement from the university. "Please do not come to campus," the statement said.

Noreen Golfman, the university's vice president academic, has encouraged all instructors to be flexible with course work.

"This includes, but is not limited to, deadlines for submission of assignments, papers, etc., as well as attendance in classes and laboratories over the next couple of days," said a statement from the university.

College of the North Atlantic's Ridge Road campus will also be closed Monday.

On Saturday, Newfoundland Power reported it had reconnected about 75 per cent of customers impacted by the storm.

The federal government has approved the province's request for assistance with the cleanup, including army mobilization.

In a tweet, St. John's Airport said its airfield is only available for air ambulance and military aircraft and that commercial flights will not start up until at least Monday at 8 p.m.

Update 3: Commercial flight ops will not resume until at least 8pm Monday, Jan. 20th. While the airport is open for air ambulance and military aircraft, the City remains in a state of emergency. Contact your airline directly for updates and rebooking. <a href="https://twitter.com/hashtag/YYTSOE?src=hash&amp;ref_src=twsrc%5Etfw">#YYTSOE</a> <a href="https://twitter.com/hashtag/Snowmageddon2020?src=hash&amp;ref_src=twsrc%5Etfw">#Snowmageddon2020</a>

Chris Baird lives on the outskirts of St. John's, above the airport, and early Sunday morning was the first time a snow plow came by to clear his street.

His driveway still isn't plowed because the plow company he hired couldn't make the trek through the snow with a plow.

Baird has lived in the city all his life, but this type of snow is new to him.

The St. John's state of emergency was called partially due to the difficulty of traveling around the city, something local firefighters are discovering as well.

The local firefighters union posted a photo on Twitter showing some of their members answering a call on foot saying they do "whatever it takes."

Some nurses are putting in extremely long hours as cleanup with this storm continues.

Registered Nurses' Union president Debbie Forward noted that some nurses at various facilities worked as many as 60 hours before they were relieved from their shifts.

"We can't leave until a replacement comes to relieve us," she told CBC's radio special.