There has been a sharp drop in the number of Canadian ships and inspectors on the water policing potential violations by foreign fishing vessels off Newfoundland, but federal officials say there are fewer of those ships to be monitored. 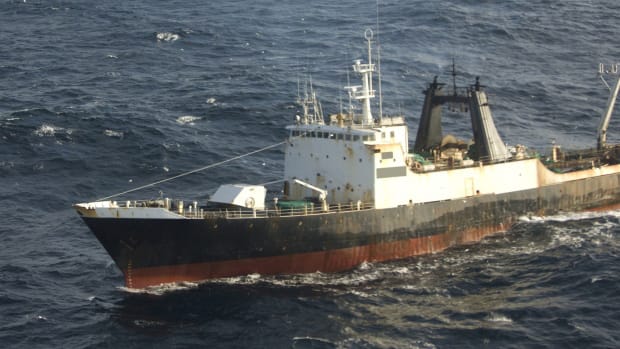 Inspections of foreign fishing vessels off N.L. coast drop by 50%

There has been a sharp drop in the number of Canadian ships and inspectors on the water monitoring and policing potential violations by foreign fishing vessels off Newfoundland.

An internal Department of Fisheries and Oceans report, obtained by CBC News through access to information, suggests that Harper-era budget cuts and the aging state of the coast guard fleet are contributing factors to the decline.

"An analysis of program data identified that patrol days and at-sea inspections in the NAFO regulatory area have decreased by 50 per cent between 2011 and 2015," an internal DFO report published in March noted.

Fisheries and Oceans officials told CBC News this week there are reasons for the reduction.

There are now fewer foreign ships fishing in international waters outside Canada's 200-mile territorial limit, and they are subject to more stringent reporting requirements. That, according to DFO, means fewer ships are necessary to monitor them.

"We were comfortable making the decision back in 2012 to reduce our numbers of inspections, based on the fact that we had seen better compliance, smaller number of vessels," said Allan MacLean, director general of the conservation and protection program at DFO.

That's not a good move, according to the former head of the Fish, Food and Allied Workers union, and current leader of the Newfoundland and Labrador NDP.

"It's kind of like taking the cops off the Trans-Canada Highway on a long weekend, " Earle McCurdy said.

'It's kind of like taking the cops off the Trans-Canada Highway on a long weekend. Once people realize that's the case, then you'll see the speeds going up."- N.L. NDP Leader Earle McCurdy

"Once people realize that's the case, then you'll see the speeds going up."

As a union leader, McCurdy had three decades of experience attending meetings of the Northwest Atlantic Fisheries Organization, or NAFO, and says the impacts can be "severe" when enforcement efforts are not as strong as they could be.

"The history, over a long period of time, is that when there isn't that presence, they don't live within the quotas, and Newfoundlanders and Labradorians on fishing boats and in plants and in small communities have paid dearly for overfishing that's taken place," McCurdy said.

According to MacLean, there are now eight or 10 fishing vessels in NAFO-controlled areas on any given day, compared to 25 or 30 back in the 1990s.

"I just continue to come back to the point of how things have changed so much in 20 years," MacLean said.

"So we made this decision. We looked at all this information and made the decision that we could still ensure that vessels were complying with the rules with a reduced effort."

He says recent statistics bear that out.

Between 2009 and 2014, inspectors handed out citations to about eight vessels per year on average.

In fact, over the past 21 months, only one vessel has been accused of breaking the rules.

A year earlier, in February 2015, the Santa Isabel had been issued a citation for exceeding bycatch limits on American plaice.

The Santa Isabel is a repeat offender. It has been cited on five separate occasions over the past six years.

According to MacLean, Ottawa is working on a proposal to crack down on vessels that receive frequent citations.

He says Canadian officials met with representatives from other NAFO countries in London on the topic two weeks ago.

There are no details on the proposal at this point, but Ottawa hopes to bring recommendations forward at NAFO meetings this fall.

In addition to the 2012 budget cuts, the internal DFO evaluation of its compliance and enforcement program also cited aging ships as an issue.

"Other explanations offered by key informants included there being a number of (coast guard) vessels that were on vessel life extension, refit or maintenance," the report noted.

A separate Transport Canada report recently tabled in the House of Commons also raised concerns about the state of the coast guard fleet, saying it "urgently requires renewal."

While MacLean says he couldn't directly address those issues, he noted that coast guard fleet availability is factored into patrol planning.

And he says the reduction in at-sea inspections won't be revisited right now.

"We are comfortable that we made the right decision at this point in time," MacLean noted.

"Not to say that if we see in the coming years, that we see an increase in illegal activities, that we won't ramp back up again. But when we looked at everything that was there, we felt it was time to rebalance our activities in that area."

Rob Antle is producer for CBC's investigative unit in Newfoundland and Labrador.