Dwight Ball was sworn in as the 13th premier of Newfoundland and Labrador at Government House in St. John's Monday, as was his new cabinet. 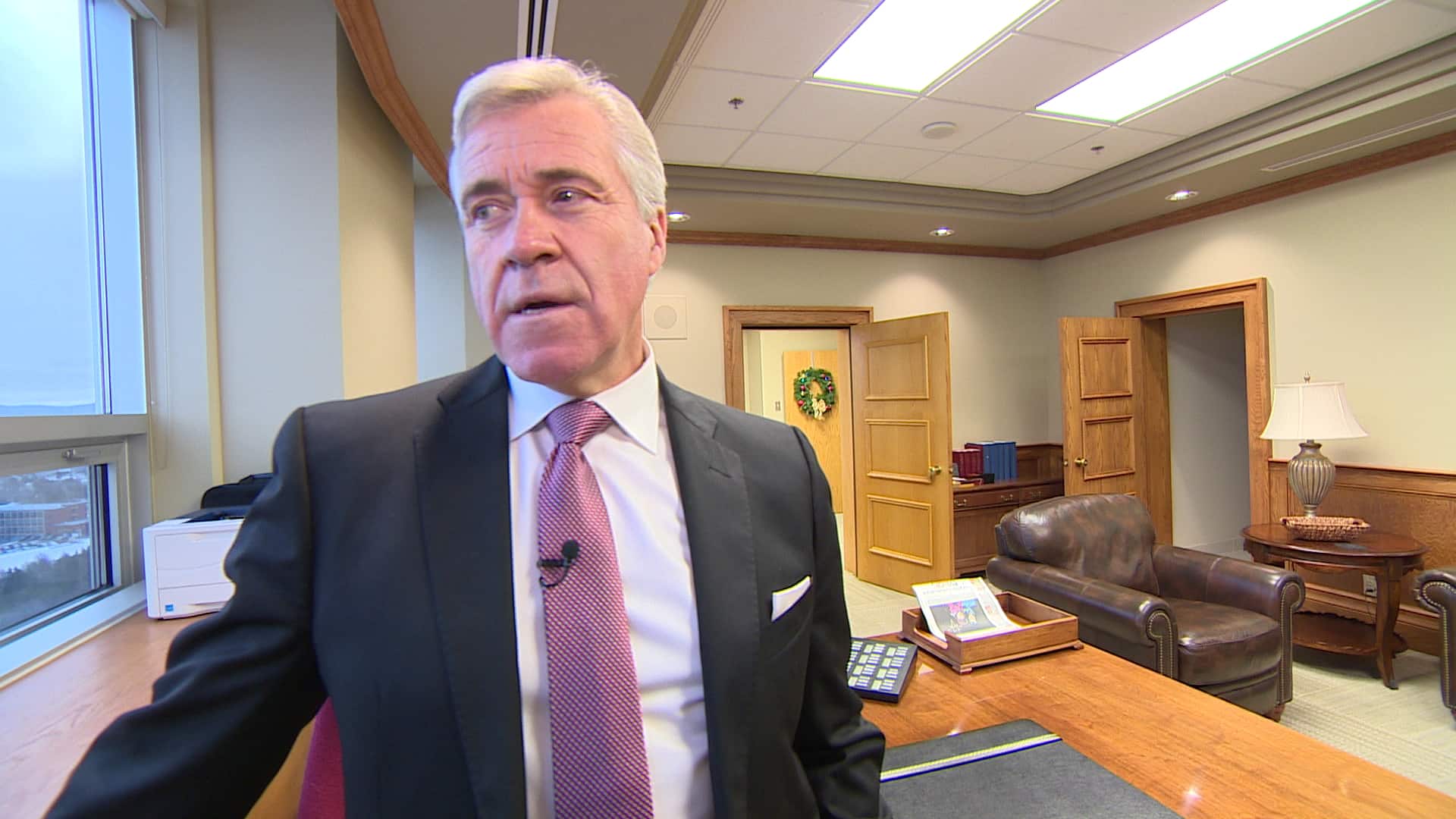 Dwight Ball was officially sworn in as the 13th premier of Newfoundland and Labrador at Government House in St. John's Monday morning.

After the swearing-in ceremony, Ball announced his government would release a mid-year financial update on Dec. 22.

"Our province, as many of you know, is facing a difficult fiscal reality and that will require a collective leadership," said Ball.

"It will also require resolve of our cabinet and engagement of all Newfoundlanders and Labradorians. This is my government's top priority."

"We can only move forward if we lay out the details of where things stand today."

During his speech, Ball said the province is facing opportunities as well as challenges, and his government will make good on its promise of transparency and openness.

"Our commitment to people will not waver and our focus will be clear. We will make decisions based on evidence, best practices and we will only take action after due diligence," he said.

"We will manage our resources wisely and we will always put the people of our province first."

In response to whether the province is in a financial crisis, Ball said he wasn't about to label anything before getting a good look at the details.

Ball says he's not about to label anything when he's asked if its a fiscal crisis <a href="https://twitter.com/hashtag/nlpoli?src=hash">#nlpoli</a>

Also sworn in Monday were 12 members of cabinet, including Cathy Bennett, who holds a total of seven portfolios, including Finance.

"Why not?"  Ball responded when asked by reporters why he selected Bennett for the role, given the current fiscal reality,

"Obviously she has quite a bit of experience so it was quite an easy choice for me," he said.

Ball repeated his promise that the Liberal government will not cut public sector job as a cost-saving measure.

Ball says even after finance briefings he's sticking with his promise of no cuts <a href="https://twitter.com/hashtag/nlpoli?src=hash">#nlpoli</a>

Ball will be holding the portfolios for Labrador and Aboriginal Affairs, as well as Intergovernmental Affairs, in addition to his role as premier.

Despite having four MHAs in Labrador, Ball said it wasn't about having members who couldn't take on those roles.

"​It was a portfolio and an office that I was very comfortable with and I want to make that level of commitment with Labrador," said Ball.

"It's important fo rme to get off to a real good start."

He added that it's not out of the question that another member could eventually move into those roles in future.

When it comes to gender parity, Ball said choosing his cabinet was "probably the toughest piece of the decision" he's had to make to date.

While only three ministers are women, Ball said MHA Lisa Dempster will, once sworn in, take on the role of deputy house speaker.

He added that a number of key committee roles will be taken on by women in the caucus.

The first cabinet meeting will be Monday at 3 p.m., with the second on Dec. 22, the same day Ball wil release the mid-year fiscal update.

Ball said the first sitting of the House of Assembly should be in early March.

Of the 12 cabinet members, two are former federal members of Parliament.

Corner Brook MHA Gerry Byrne is the minister of Advanced Education and Skills.

St. Barbe-L'Anse aux Meadows MHA Christopher Mitchelmore is the minister of Business, Tourism, Culture and Rural Development, and is also responsible for the research and development corporation and the forestry and agrifoods agency.

Carbonear-Trinity-Bay de Verde MHA Steve Crocker is the minister of Fisheries and Aquaculture.

Gander MHA John Haggie is the minister of Health and Community Services.

Grand Falls-Windsor-Buchans MHA Al Hawkins is the minister of Transportation and Works.

Lake Melville MHA Perry Trimper is the minister of Environment and Conservation, minister responsible for the Multi-Materials Stewardship Board (MMSB), Climate Change and Energy Efficiency, the Labour Relations Agency, and Francophone Affairs.

Ball and his new cabinet are taking the reins of power after a landslide victory in Newfoundland and Labrador's provincial election.

Follow our live blog on the cabinet swearing-in here.