Bringing the power from Muskrat Falls: a look at the transmission towers

Crew are working 11-hour days to build the towers that will hold the transmission lines for Muskrat Falls, a project that will use enough steel to build the Eiffel Tower 10 times over. 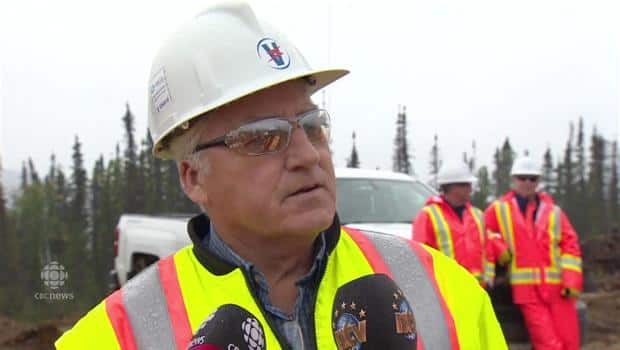 6 years ago
2:03
A behind-the-scenes look at the transmission line that will bring power from Muskrat Falls to the Newfoundland 2:03

Giant pieces of steel resembling pieces of a children's Meccano set are lined up on a muddy track in seemingly the middle of nowhere in Labrador. They're not toys, they're the towers that will hold the transmission lines bringing the power generated at Muskrat Falls to Newfoundland and Labrador homes.

"There's about 1,264 towers on the AC line going to Churchill Falls and that's what we're assembling here." said construction manager Jim Dooley. "Pretty much a giant Meccano and we got our own sand hills here."

"There's about a 14-man crew on it and we take about five days. We have one foreman on shift and the rest are all assemblers and we work continuously for approximately 11 hours a day," Dooley said

Alberta-based company Valard Construction is in charge of the Muskrat Falls-to-Churchill Falls section of the transmission line. It's built about 230 towers so far and has more than 1,000 left to go. In order to finish on time, the crew will have to work through all kinds of weather.

"Well we're used to high winds and frost and snow and ice and all that from Alberta and the Yukon as well as Labrador so I don't think that will play too much havoc with us," Dooley said.

Valard Construction said the goal is to hire as many people from this province as possible, including Penote Rich — one of three Innu building the towers.

"All kinds of weather conditions we work in here. Hard work, hey? A lot of work to be done on these towers. Working 11 hours a day for three weeks," Rich said.

"There's close to 400 people, so about 100 would be outsiders. But the majority of people, we're hiring from Newfoundland and Labrador. It's been a real good project for the Newfoundlanders and Labradorians, the Innu people and the First Nations," Dooley adds.

The transmission line will travel 1,500 kilometres across the province through the Long Range mountains and across all kinds of terrain.

It will finish on the Avalon Peninsula near Soldiers Pond. Before the power can get from Labrador to the island portion of the province, it has to cross the strait of Belle Isle, using underwater cables.