A woman who runs two small stores in the Avalon Mall in St. John's was startled by two shoplifters who not only stole jewelry but an entire display case this week. 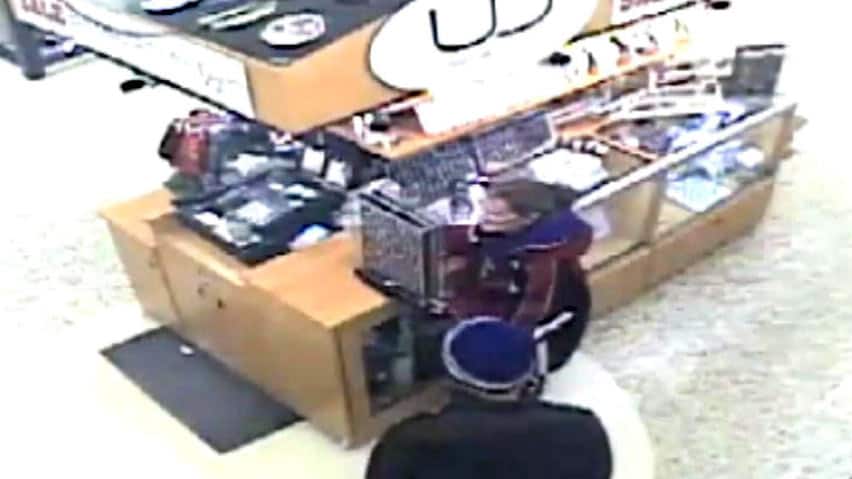 A woman who runs two small stores in the Avalon Mall in St. John's was startled by two shoplifters who not only stole jewelry but an entire display case this week.

"I could not, honestly, believe my eyes. It put chills to my spine," said Heather James, who operates the Unique Design kiosk and another business at the mall.

James, who was not at the kiosk at the time, was able to see the theft thanks to a video surveillance system she had installed herself.

She said the video — which shows a man and a woman quickly casing the business while a clerk worked just feet away — is unlike anything she has seen.

"We had two people actually take a whole display case and literally walk through the mall, and had a car waiting at the opposite side of the mall at Winners' entrance," James told CBC News.

In the video, the woman turns the case on its pedestal while the man stands nearby, possibly keeping an eye on the employee. On one turn, the woman then grabs the stand, quickly passing it to her accomplice.

James posted the video on Facebook, where it was quickly shared and viewed by other users.

"The social media has grabbed this, and everybody cannot believe the boldness, the daringness of this particular act," she said.

A 12-year veteran in the mall, James said theft has been a chronic problem. Monday's robbery, though, marked a new low.

"Usually, it's one or two items [but] never during the day — broad daylight, 3 o'clock in the afternoon, in this busy, high-traffic area," she said.

James said she is hoping to at least get back her merchandise, which is worth about $3,000.

"I'm sick of theft. I'm sick of people taking from local businesses, and business in general," she said.

"It's just non-stop here in the city. Things need to get tighter, and it needs to come to an end."

The same couple also made an appearance at James's other kiosk, but they were spotted and were able to leave before security arrived.

James has already received at least one lead on the crime.