The City of St. John's and neighbouring municipalities, including Mount Pearl, Paradise and Conception Bay South, declared a state of emergency Friday as a massive storm system moves through the eastern part of Newfoundland and Labrador. 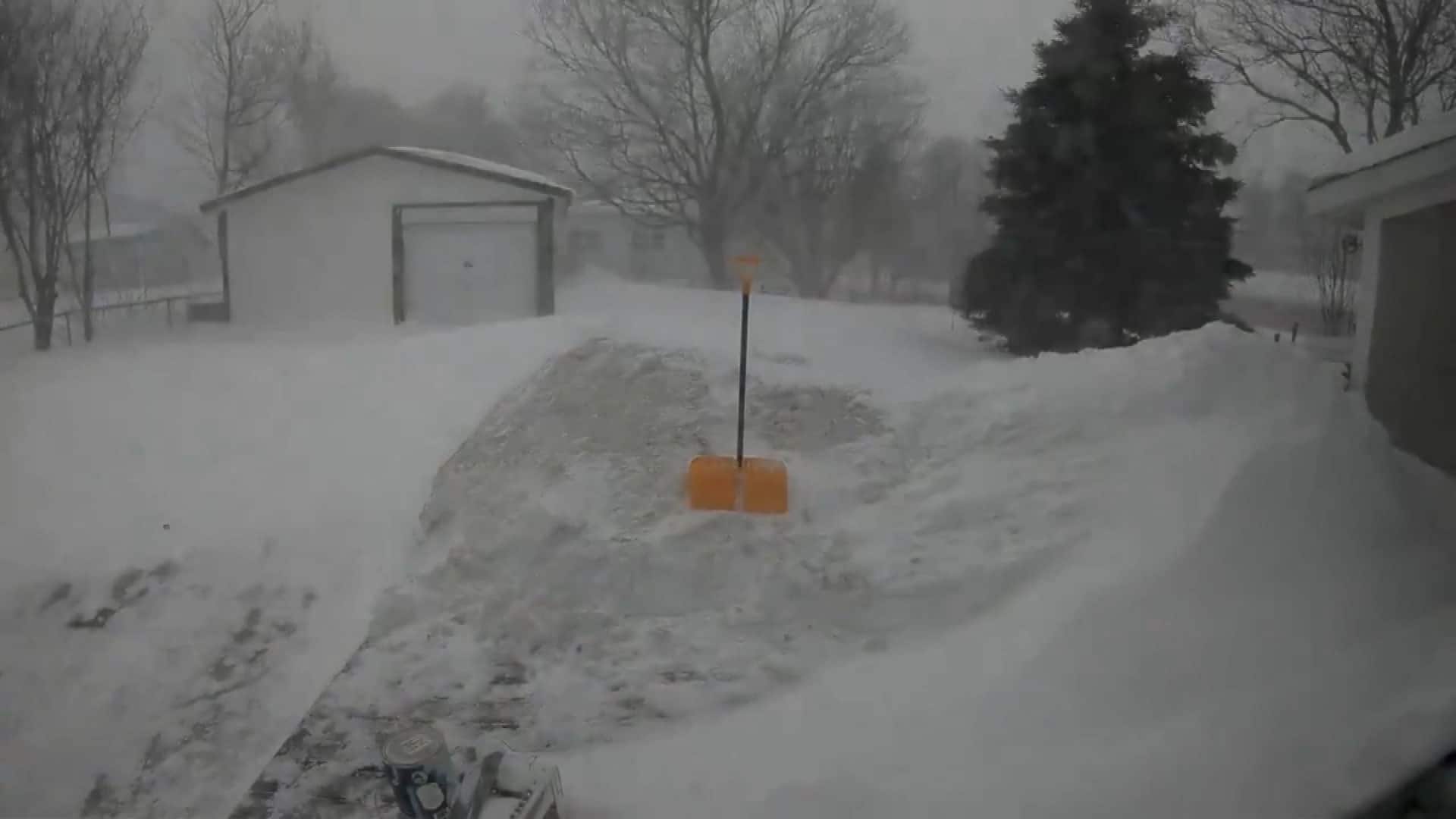 The N.L. storm through the lens of CBC journalists

1 year agoVideo
1:04
The blizzard moving through St. John's is being called historic and unprecedented. 1:04

The City of St. John's and neighbouring municipalities, including Mount Pearl, Paradise and Conception Bay South on Avalon Peninsula, declared a state of emergency Friday as a massive storm system moved through the eastern part of Newfoundland and Labrador.

An unprecedented blizzard that is whipping its way through the region has metro St. John's hunkering down for the day for what is projected to be 75 centimetres of snow and bracing against severe weather, with winds reaching up to 150 km/h. Mass power outages have swept through the metro area, Conception Bay North, the Burin Peninsula and Gander vicinity.

The CBC station in St. John's lost its backup power, but that has been restored.

At 3:30 p.m. NT on Friday, Municipal Affairs and Environment Minister Derrick Bragg said people throughout the eastern region of the island, particularly in the areas around St. John's, should stay indoors. 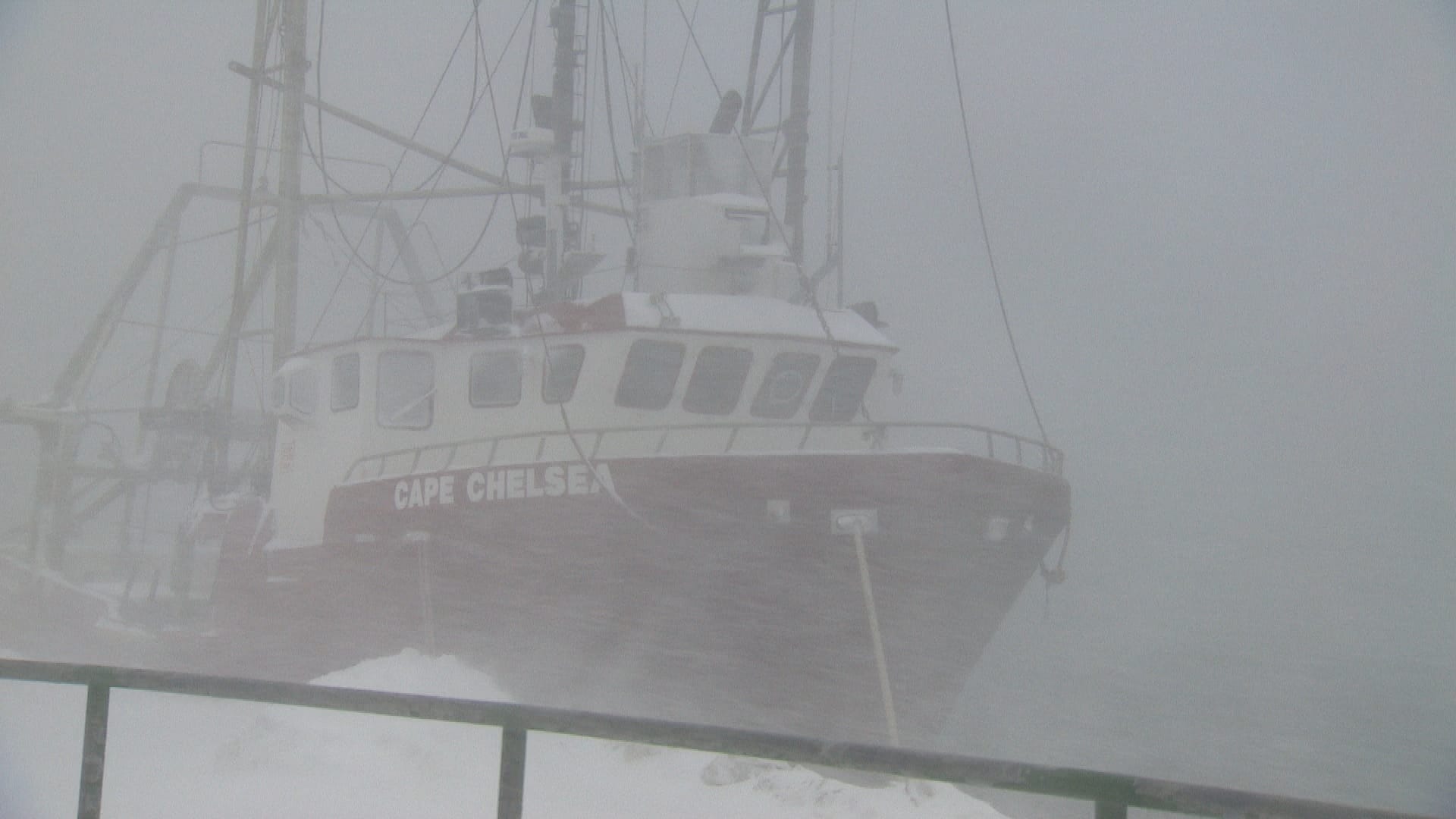 1 year agoVideo
0:58
Amid a state of emergency, St. John's appears almost deserted as people seek refuge from the storm indoors   0:58

Bragg told CBC News that 25 of 26 snow clearing depots have been closed in eastern Newfoundland.

"With no snow clearing on the main highways, fire trucks and ambulances and all first responders would not, right now, be able to reach you in most cases," Bragg said.

"Please, don't do anything that would endanger the lives of first responders by putting these people out in these conditions. If the snowplow people are off the roads, you can be pretty sure it's not safe to be out."

At 9 p.m. the province's department of transportation and works said it's still too dangerous for plows to be operating. Many pieces of equipment as far west as Badger, about 450 kilometres west of St. John's, have been taken off highways due to unsafe conditions.

Plow operators have responded to 105 requests for assistance so far on Friday, 24 from ambulances, 21 from police and 60 from the public, according to the department.

The department anticipates snow clearing to begin Saturday morning, adding that approximately 65 centimetres of snow has fallen in the St. John's area so far.

According to Bragg, warming centres have been organized by municipalities, but it's important to locate your nearest one before you lose power.

Bragg said there is a plan in place where most municipalities have a loader or piece of snow-clearing equipment stationed in front of their fire halls.

Premier Dwight Ball spoke with CBC News on Friday evening. He reminded the public to reach 511, the province's travel information service, in the event of emergencies, either by phone or by visiting 511nl.ca.

The service offers current updates on highway conditions for the entire province, and in the event of an emergency, the assistance of a snowplow operator to help with other emergency services, such as ambulances.

How St. John's, other municipalities are being affected

Judy O'Keefe, Eastern Health's vice-president of clinical services, said the health authority is advising staff not to report to work Friday evening or Saturday morning under the metro-area's current state of emergency.

Staff currently at work are advised that they cannot leave, due to safety concerns.

St. John's Mayor Danny Breen declared the state of emergency at 11 a.m., directing all businesses to close. All vehicles, except for emergency crews, have been instructed to leave the roads.

"Anybody that's out right now, you need to return to your home and you need to stay there until we lift the state of emergency," Breen told CBC News.

Breen also told CBC that the state of emergency in St. John's is unlikely to be lifted on Saturday to give road crews a chance to clear.

1 year agoVideo
1:23
Fast, heavy snow and high winds whip through and shut almost everything down 1:23

At 6 p.m., St. John's temporarily suspended all snow-clearing operations. However, snowplow operators remain on standby at various locations throughout the city, including hospitals, fire departments and the Battery neighbourhood, according to the city.

As of 8 p.m., A part of the Battery neighbourhood was being evacuated due to an avalanche warning.

Breen said 311 is still available, and city staff are ready for emergency calls.

At 4:30 p.m., Bonavista Mayor John Norman declared a state of emergency for the town about 300 kilometres northwest of St. John's.

Norman said all town staff have been pulled from the roads and advised residents to call 911 with emergencies.

In the event of a medical emergency, Norman said a town plow will be available as an escort to the hospital.

The town of Paradise has also removed its snow-clearing equipment from its streets.

Over 75 centimetres of snow is expected to fall on the Avalon Peninsula by Friday night, while winds are expected to gust to as high as 150 km/h in coastal areas.

The storm is so powerful that the Newfoundland and Labrador government pulled its plows from regional highways.

Transportation Minister Steve Crocker said the main issue was visibility, with windshields granting views to little more than a solid plane of white.

"It's no longer safe. You can just imagine, the size of the equipment that our operators are operating, and they're out there and they don't know where a road ends or where a road begins in a lot of cases." 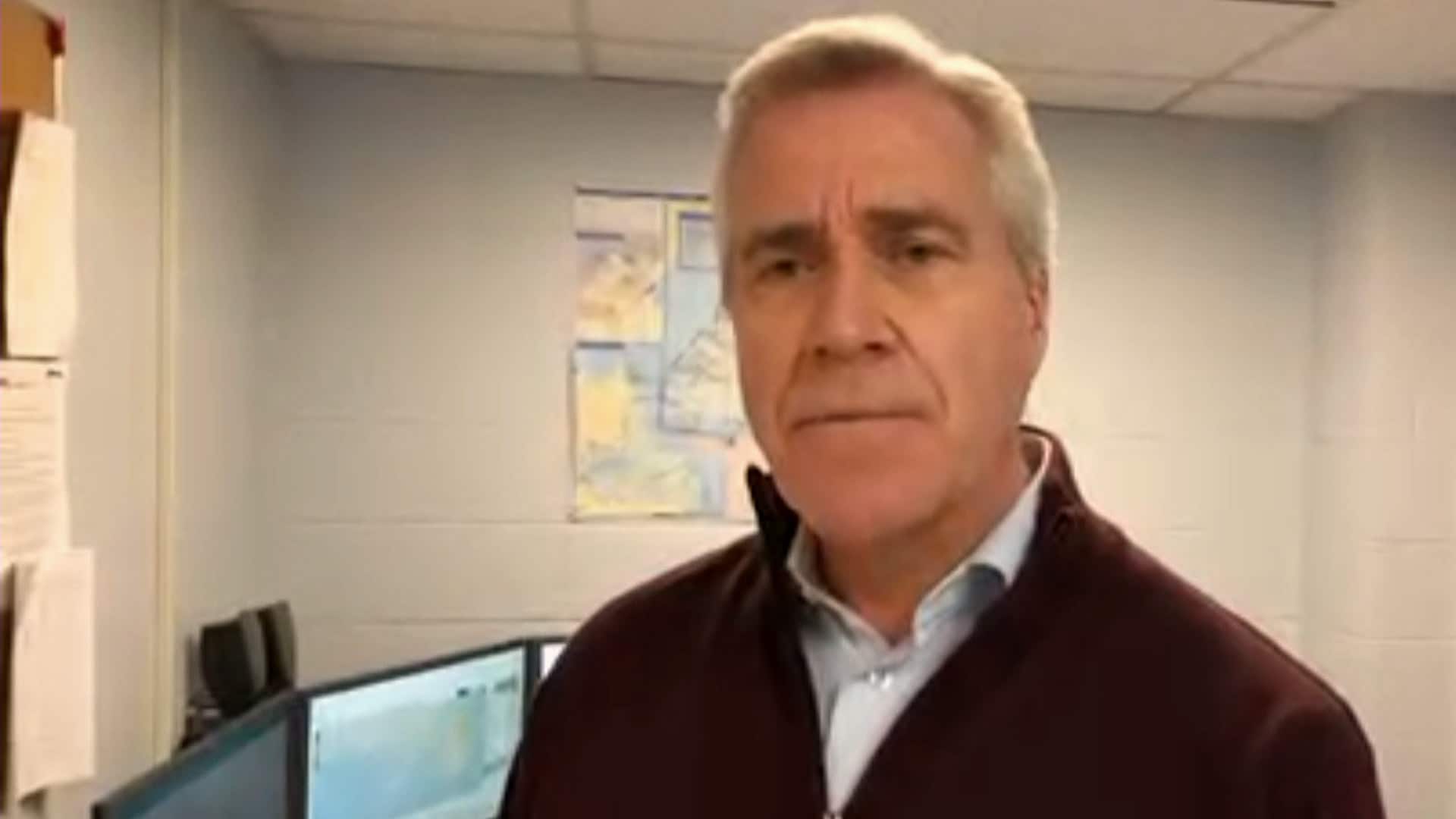 1 year agoVideo
7:02
Newfoundland and Labrador Premier Dwight Ball advised people in his province to remain inside, barring an emergency, amid the ongoing blizzard. 7:02

Premier Ball said the province is bringing in snow-clearing equipment from the west coast of the island to assist in the cleanup on the east coast.

"A lot of the work is happening today in preparation for when the storm is finally over, that we have supports in place to support those areas that need the extra equipment and human resources to get to the cleanup," he said.

CBC meteorologists Ryan Snoddon and Ashley Brauweiler continue to track the blizzard, with updates which will see the strongest winds yet to come.

According to Snoddon, the Avalon Peninsula will feel the strongest winds by 6 p.m. Friday, but will taper slightly overnight and into Saturday morning. Snoddon said Saturday afternoon will be a good window for those attempting to dig out, with winds expecting to hover around 80 km/h.

The Bonavista Peninsula will continue to deal with strong winds overnight and into Saturday.

The Avalon Peninsula is expected to see a mix of rain and snow on Sunday and into the overnight, with rain or drizzle expected for Monday.

An RCMP spokesperson for the province had stern words for anybody thinking of driving in a non-emergency.

"It's no joke, this is not a 'nice to.' We're really saying, 'Stay off the road,'" said Const. Jolene Garlene.

To everyone in NL affected by the storm, please listen to your local authorities. We want you to stay safe, and keep the roads clear for emergency vehicles &amp; snow clearing. <a href="https://twitter.com/BillBlair?ref_src=twsrc%5Etfw">@BillBlair</a> is in contact with the province &amp; is monitoring the situation. We’re ready to help if needed.

She explained that officers have already been called to help drivers who've gone off the road and are stuck, but she said police on the island have limited capacity and ability to help in current conditions without putting themselves at risk.

Conditions steadily deteriorated through the morning, with visibility getting worse as winds pick up. Mayor Breen indicated the potential for power failures was a deciding factor in ordering the state of emergency.

"When you get the high winds like that, and the snow, there's just so many issues at play that you really do need to just shut it down — get everything cleaned up," Breen said, adding he doesn't recall the city facing such a severe storm in decades. 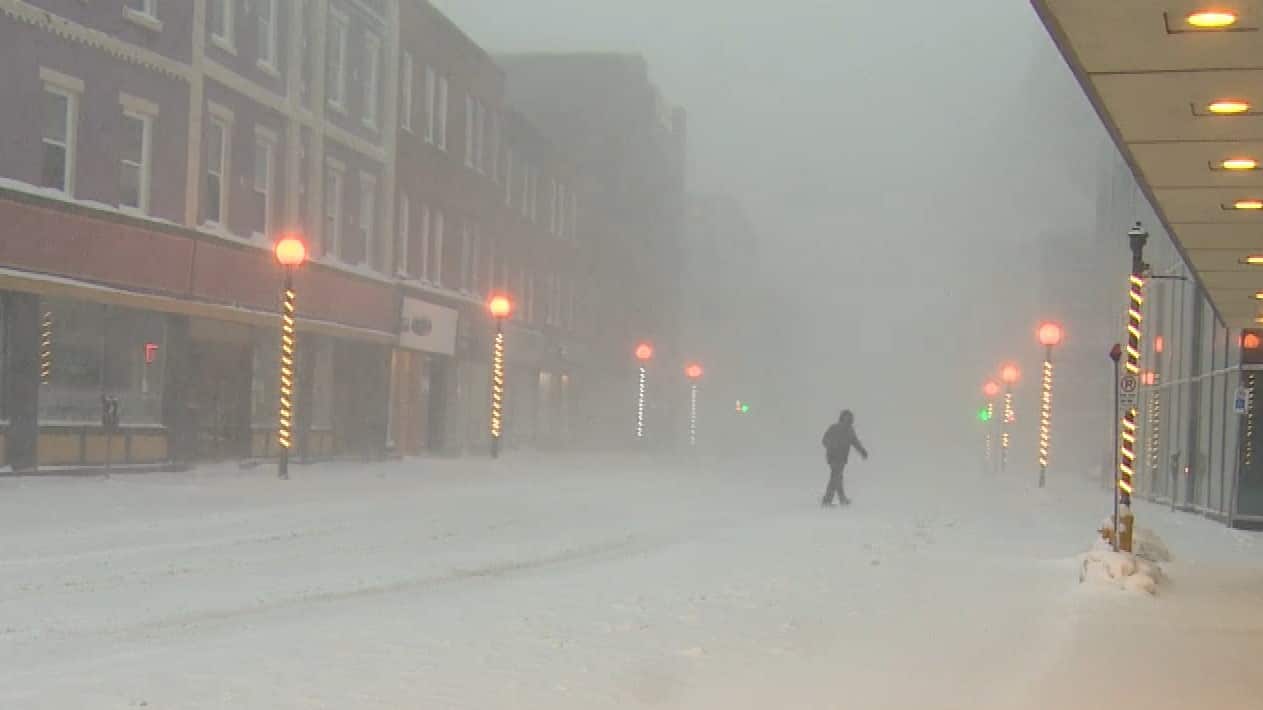 'We want everybody to stay home,' urges St. John's mayor

The last time St. John's declared a state of emergency was an ice storm that struck the region in 1984, he said.

Breen said he isn't sure at this point when the order will be lifted, as much depends on cleanup that the city had already struggled with after back-to-back storms.

Up to 10 cm falling per hour

The Newfoundland and Labrador English School District closed a slew of schools in the eastern and central regions, while Memorial University, the Marine Institute and the College of the North Atlantic were also shut for the day.

"The prime minister, I know, has reached out today — so has the local MP and the local minister here," he said.

"So everybody is engaged in this — working with communities. Once the storm is over they will support the cleanup, and it will take some time. So we're asking people to be patient."

Metrobus cancelled its public transit service before snow even fell, following up with a statement that it will also not be running on Saturday.

Most flights are cancelled at St. John's International Airport.

The state of emergency order affects taxis. Jiffy Cabs, one of the best-known companies in St. John's, said it is the first time in the business's history that it ever pulled its entire fleet off the road.