This has been an amazing year to see icebergs along Newfoundland's northeast coast, and one of the best places these days — as the CBC's Lindsay Bird discovered — is near Bonavista. 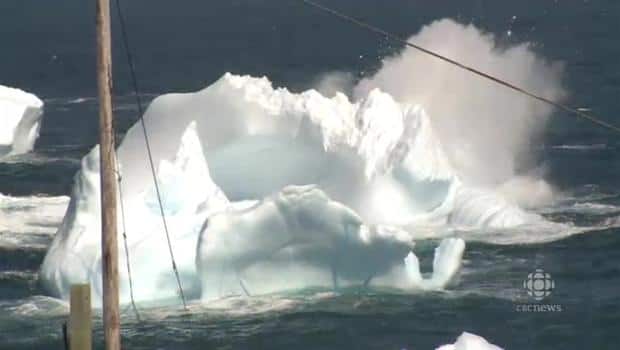 7 years agoVideo
2:03
The CBC's Lindsay Bird shot this footage of icebergs off Bonavista 2:03

This has been an amazing year to see icebergs along Newfoundland's northeast coast, and one of the best places these days — as the CBC's Lindsay Bird discovered — is near Bonavista.

Bird was in the community, shooting a story about the local premiere of the Grand Seduction, a feature film made in the area starring Brendan Gleeson, Gordon Pinsent and Taylor Kitsch

Afterwards, town manager Calvin Rolls and Bird went down a gravel road where there were 50 or 60 people going back and forth.

Bird was amazed to see how many icebergs were in the one area, and how "incredibly unique every single one was."

"You could see 40 or 50 if you turned your head one way," she said, and each one was different.

Rolls told her he had never seen anything like it.

This is the first time Bird has seen icebergs since she moved to Newfoundland a year and a half ago. But the highlight happened when one of them started to break apart.

"I lost my mind when it started to break up, I was so excited," Bird says.

She managed to capture some of the action before her camera's battery died. But she said video can't capture the roar when a piece of the iceberg hit the water.

"It's something you can't quite capture," she said.

Watch the video to the icebergs near Bonavista.