Across the country, July 1 is Canada Day. But in Newfoundland and Labrador, it's Memorial Day.

100th anniversary of WW I battle that saw hundreds of Nfld. soldiers killed in France 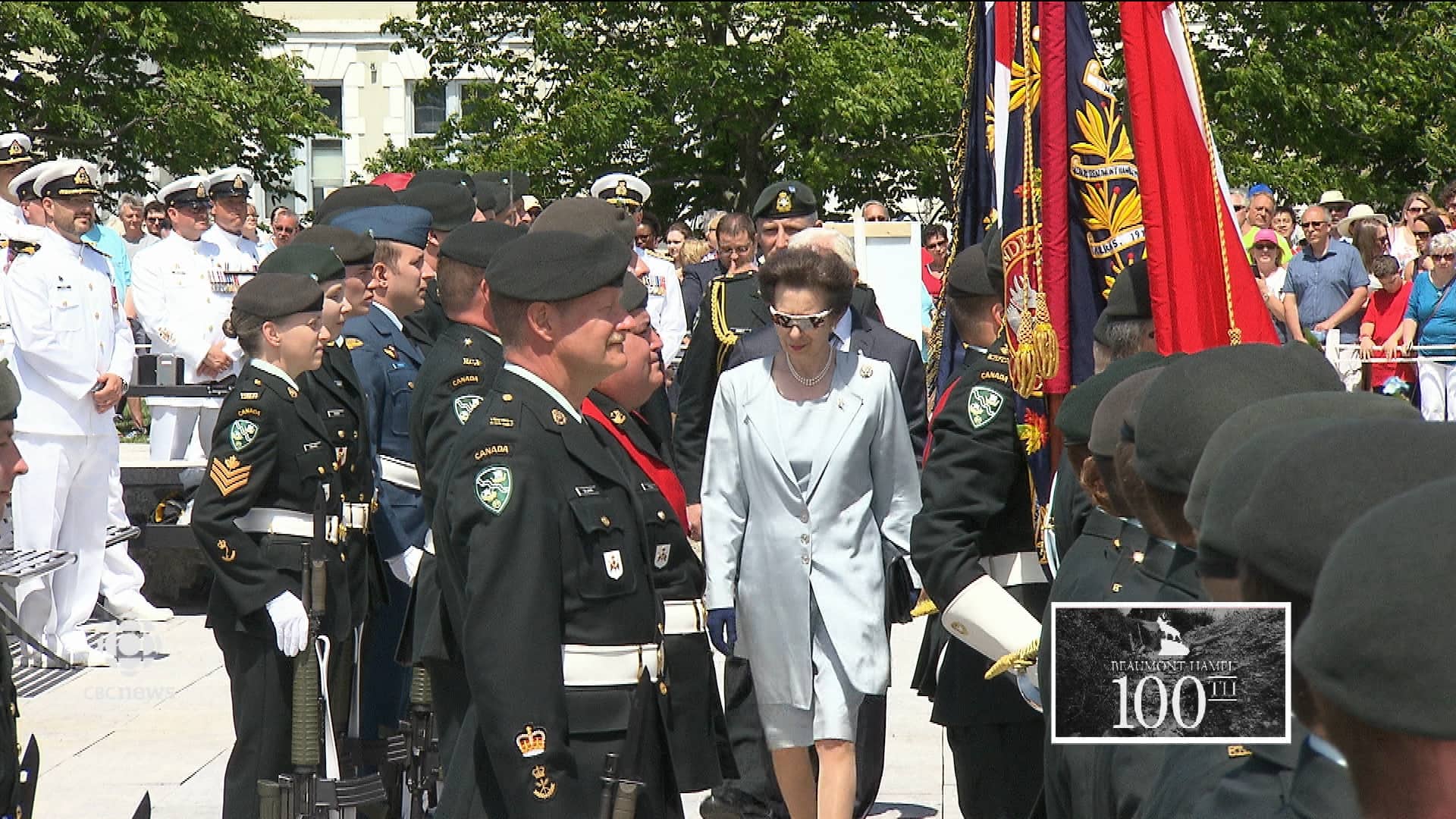 Across the country, July 1 is Canada Day. But in Newfoundland and Labrador, it's Memorial Day.

This year, it's also the 100th anniversary of Beaumont-Hamel, the First World War battle that saw hundreds of Newfoundland soldiers slaughtered on the French battlefield in the opening day of the traumatic Battle of the Somme.

To mark the sombre anniversary, ceremonies were held across the province.

Commemorative wreath-laying ceremonies and a march were held at the National War Memorial in downtown St. John's, and live performances and speeches were held at The Rooms, the provincial museum, archives and art gallery.

At the National War Memorial, Princess Anne and Lt.-Gov. Frank Fagan laid the first wreaths. Cpl. Brian Pinksen's mother laid the second wreath in remembrance of her son, from the 2nd Battalion of the Royal Newfoundland Regiment, who was killed in Afghanistan.

Premier Dwight Ball and MPs Seamus O'Regan and Judy Foote also laid wreaths, as did dignitaries from other countries, including France, Turkey and Belgium.

On Friday afternoon, ahead of the opening of the Royal Newfoundland Regiment Gallery at The Rooms, Princess Anne spoke to crowds waiting to open the exhibit.

Anne, who is colonel-in-chief of the Royal Newfoundland Regiment, said the new permanent exhibit will be a memorial to the lives — and deaths — of all who served.

"The new gallery does not describe military campaigns, it speaks instead of individual men and women, of courage and gallantry, of their loss and their despair," she said.

"And it underlines that phrase, 'They were ordinary people who did extraordinary things.' And to use the word by which they were known to their fellow Newfoundlanders: they were ours."

Also in attendance at the War Memorial was Chief Petty Officer Calum Blake, with the Australian navy, who came to St. John's privately on behalf of his grandfather.

Blake said his grandfather was serving in Africa when he was seconded to the 166 — the Royal Newfoundland Regiment Field Artillery Unit. 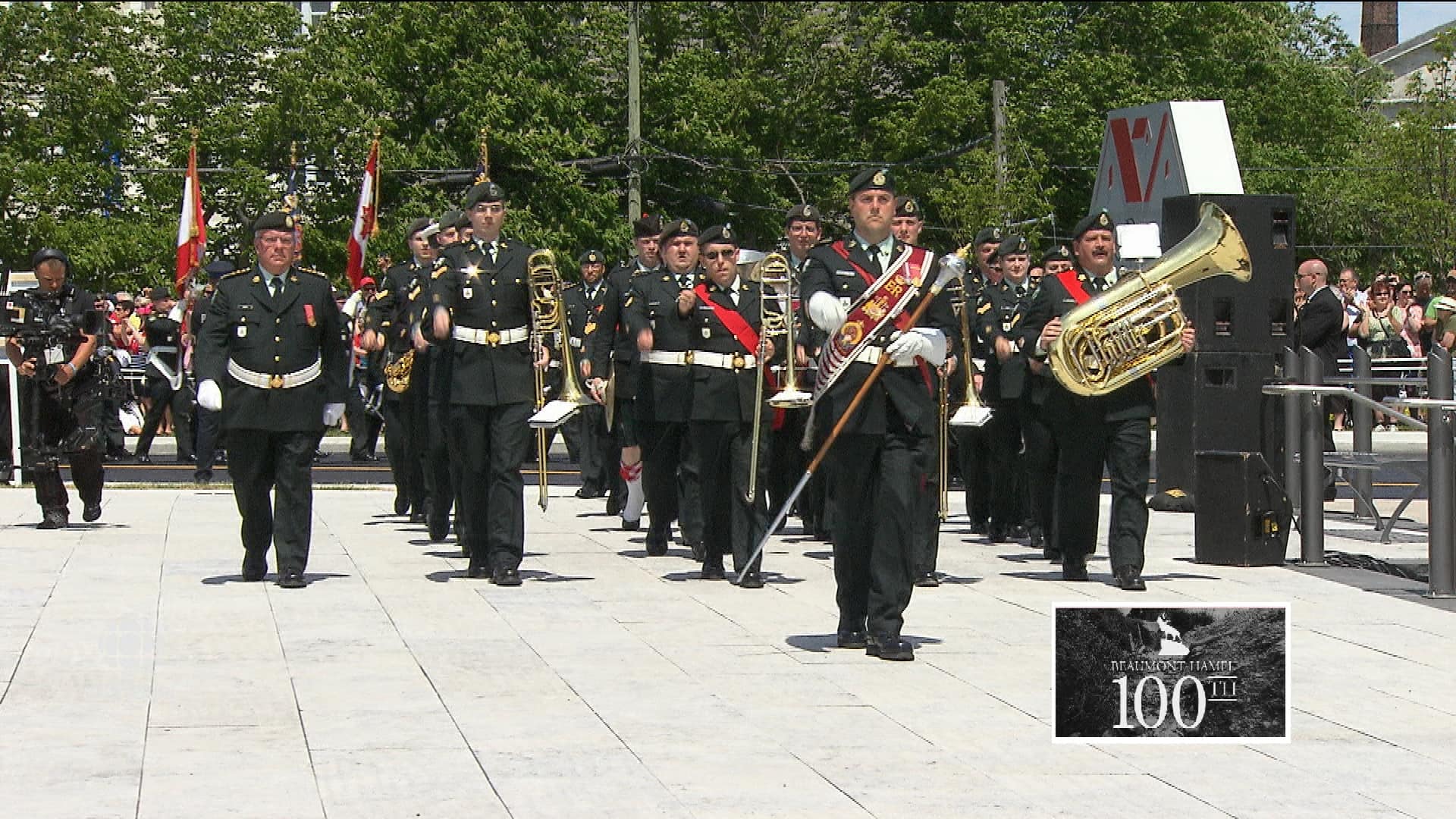 5 years agoVideo
1:24
The Memorial parade arrives to the festivities. 1:24

"In his diary, I remember him saying from the first time, 'What have I done to deserve this? These Newfoundlanders, a rag tag bunch.' But after his time and all through the service, he couldn't praise them high enough," Blake said.

"Just the bravery and the camaraderie that they had with each other, and the way that they welcomed them into the regiment was absolutely outstanding."

Blake said that after the war ended, his grandfather made the trek from Australia to Newfoundland four or five times and wanted his family to take part in this special ceremony.

"He died about a year-and-a-half ago and on his death bed, he asked me if I could do the honour and represent him here for this anniversary," he said.

"Right now, it's pretty emotional, I must admit … I'm wearing my grandfather's medals today. Just to be up there and let him take part in this, as well."

'He felt so proud'

Mary Blackwood and her brother, John Taylor, were at the afternoon's ceremonies at The Rooms ahead of the opening of the Beaumont-Hamel exhibit.

Their father was one of the first 500 members of the Royal Newfoundland Regiment: his number was 111.

Blackwood said whenever she looks at the clock and it happens to be 1:11, she thinks of her father.

Some of the war-time items belonging to Blackwood's father will be on display in the exhibit, which opened today. 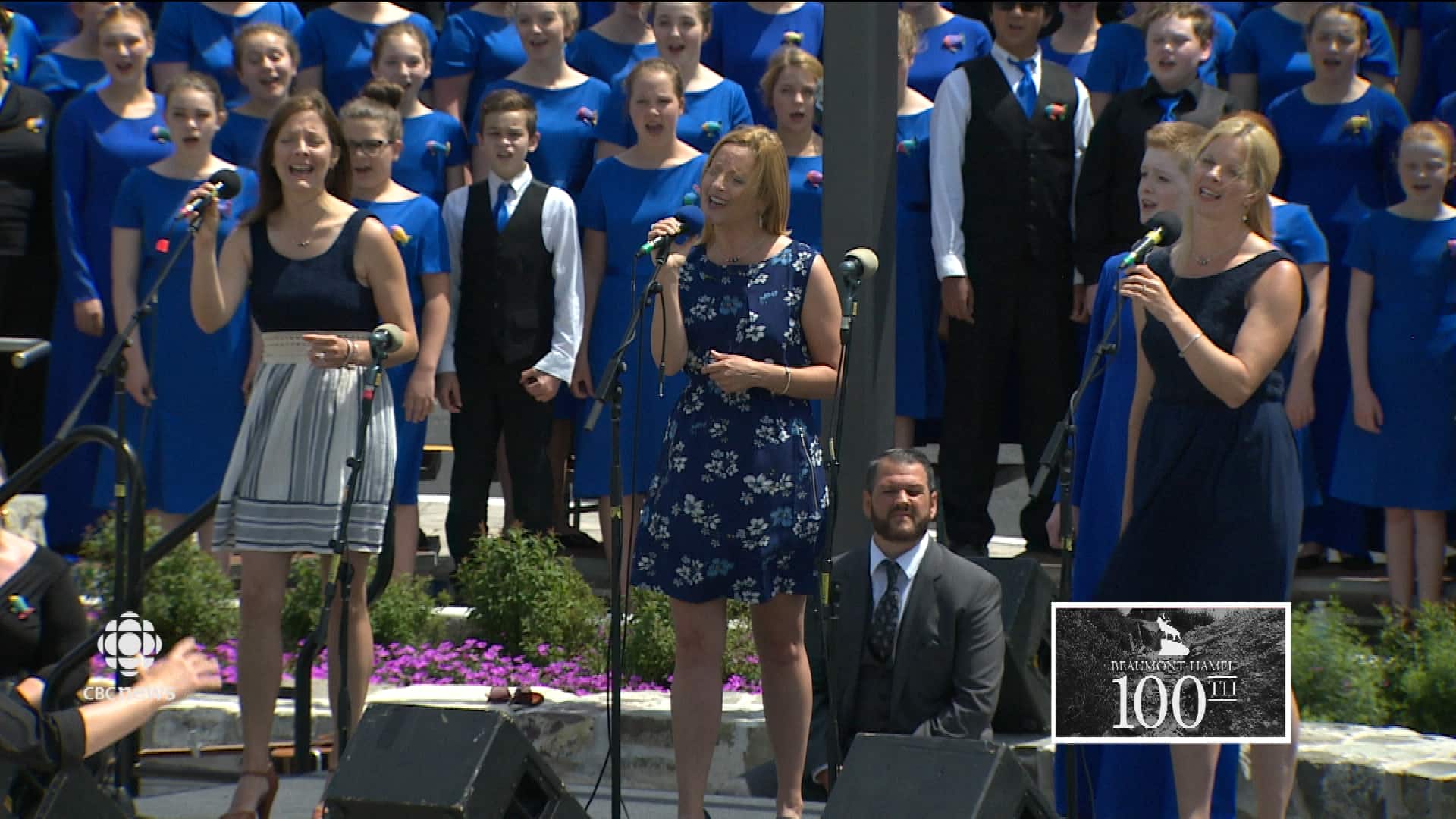 5 years agoVideo
3:46
The Ennis Sisters and Shallaway Choir perform 'We Rise Again' outside The Rooms on Memorial Day in St. John's. 3:46

Today was a special day for many reasons, she said, remembering a trip she made with her father to Beaumont-Hamel some years ago, when she met some of his fellow regiment survivors.

"I met one of them and he took me aside and he said, 'Missy, come over I want to show you something,'" she said.

"He took me over to this trench and he said, 'Look, this is where I lost this.' He had lost his arm. He felt so good, right, about that, what he had done. He felt so proud."

'They didn't stand a chance'

Former lieutenant-governor Ed Roberts said Friday's ceremonies in St. John's are probably the biggest yet, with more young people turning up to mark the anniversaries.

Roberts said people learn more every year about what the young soldiers went through in France and those stories stick with them.

"They knew what they were doing, and they knew they didn't stand a chance," said Roberts. "It was just like a turkey shoot, and yet every man went forward." 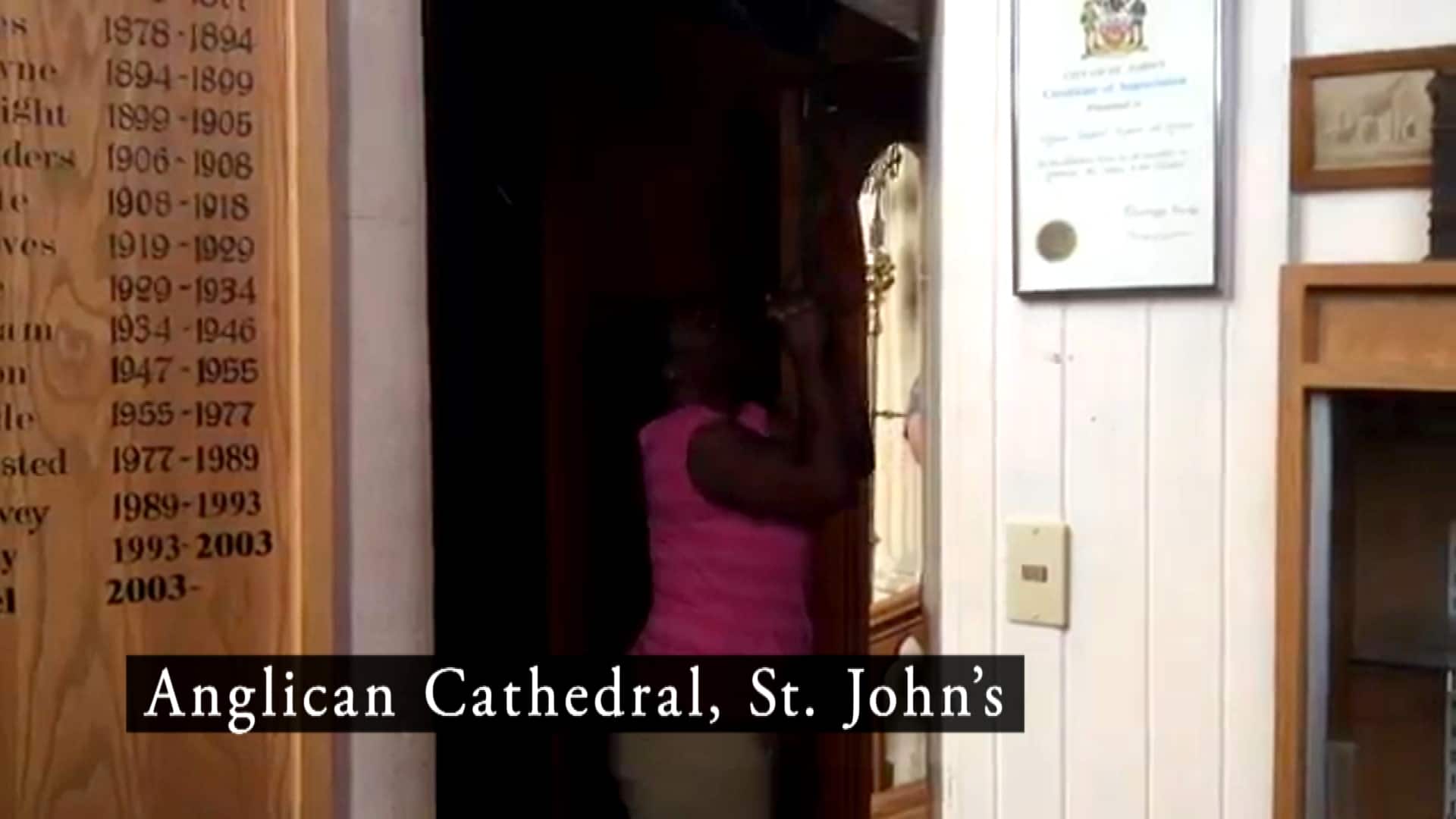 Church bell rings out across Newfoundland and Labrador

5 years agoVideo
0:47
Churches across the province rang its bells Friday morning in honour of the Battle of Beaumont-Hamel 0:47

On Friday morning at 8:45 a.m. NT, church bells across the province rang in unison to mark the Beaumont-Hamel anniversary.

'We will never forget'

Defence Minister Harjit Sajjan issued a statement Friday to acknowledge the sacrifices made at the Battle of the Somme and Beaumont-Hamel.

"We remember the incredible bravery of the Canadians and Newfoundlanders who fought in these battles, which began in northern France on July 1, 1916," he said.

"We will never forget them."

Prime Minister Justin Trudeau also released a statement on the anniversary of what he called "the bloodiest battle of the First World War."

"Beaumont-Hamel is a name that is seared into the hearts of all Newfoundlanders and Labradorians. It is a name that represents courage, sacrifice and sorrow," read the statement.

Read a recap of our live blog from earlier today below. Can't see it on mobile? Click here.