Maybe it's the luck of the Blue Jays that's put over $20,000 in each pocket of a group of health care workers in Baie Verte.

"He's the lucky man, so we're keeping him in the group," says winner Chris Howell of co-worker 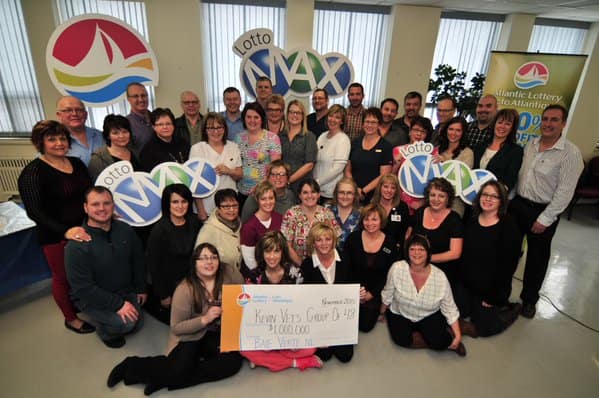 Maybe it's the luck of the Blue Jays that's put over $20,000 in each pocket of a group of health care workers in Baie Verte.

Forty-eight employees at the Baie Verte Peninsula Health Centre are the winners of the $1 million Lotto Max from September.

"I'm a sports fanatic and I'm a bit superstitious so I have to have something positive happen before I can check things," said winner and trustee Kevin Vey.

"When the Blue Jays won, we decided to check a few tickets and it was only the fourth or fifth ticket that we checked through when we realized we won."

Any time there's a lottery jackpot above $15 million, the workers start collecting $7 from whoever wants to chip in on a few tickets.

Atlantic Lottery presented the cheque at the health centre's board room Wednesday afternoon.

One man plans on starting an education fund for his three-year-old boy, Howell said.

As for Vey, being a lotto winner isn't a new feeling.

"He's the lucky man, so we're keeping him in the group," Howell laughed.