Slay the Gander: 80 breast cancer survivors take on one of N.L.'s most unpredictable lakes

An Atlantic Voice documentary by Wanita Bates looks at the inspiring women who rowed five dragon boats for 40 kilometres on Gander Lake.

I'll be honest, I'm not much of an outdoors person and I'm afraid of deep, dark water. So when Bruce Whitelaw from the Avalon Dragons Team asked me to join them on the Slay the Gander adventure, I hesitated.

Three days in a dragon boat on unpredictable Gander Lake. I'd be in one of five boats rowed by 80 breast cancer survivors from Newfoundland, Cape Breton and Ontario. We'd be sleeping in tents and paddling 10 to 15 kilometres a day. 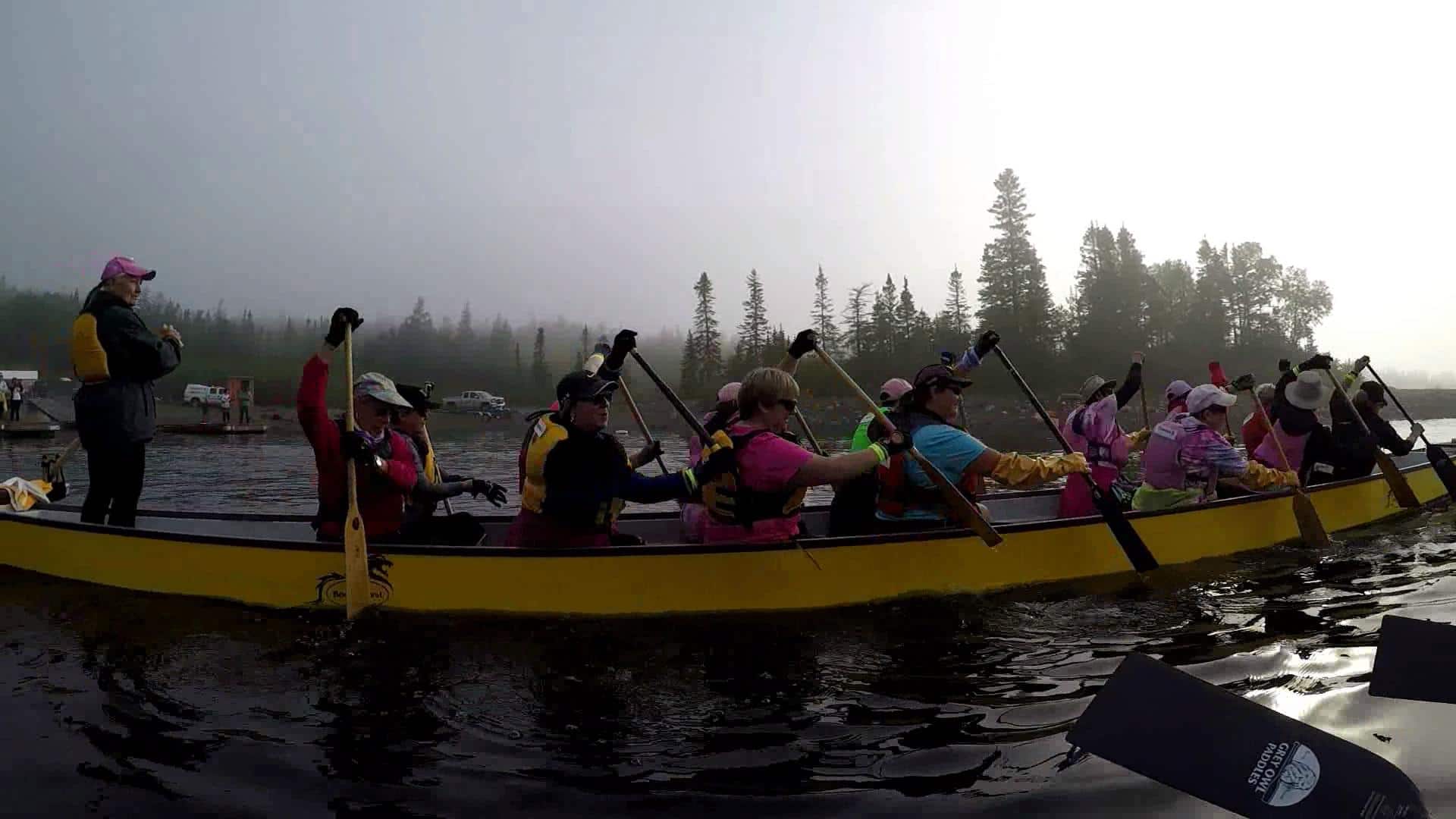 The woods and the water held no attraction for me, but 10 years ago I did a radio story on the Avalon Dragons as they built their very own dragon boat from scratch and I loved those women.

They oozed positivity and were a hoot to be around. I remember from that time that along with recovering from breast cancer surgeries and treatments, none were particularly athletic and many were nervous about being on the water, but they didn't let that stop them.

When they launched their boat October 2007, I was bursting with pride and felt like I was part of their team.

How could I tell Bruce that water is my deepest fear? He's been volunteering with the Avalon Dragons since April 2006.

"Take your life in your hands and make the most of every minute" she said. "You have to make every moment count."

I sent Bruce a one-word reply in caps: "YES!"

Then I checked my calendar to see how many weeks I had to gather my courage.

The date came and I arrived at Gander Lake to what looked like a military operation. The Little Harbour camp was named Camp Brenda in honour of Brenda Reid who died two months earlier of cancer. Clusters of paddlers make their way down to the dock

I slip a small plastic Virgin Mary in my top pocket. It can't hurt.- Wanita Bates

I couldn't be more conspicuous. I'm wearing a photographer's vest that has 175 pockets, I've got a GoPro, a DSLR, and two small backup cameras, plus tripods, a selfie stick, a sound recorder, two microphones and enough batteries to sink a dragon boat. I slip a small plastic Virgin Mary in my top pocket. It can't hurt.

The women's energy level is on bust and the sound of their laughter drowns out the sound of blood pounding in my ears.

I'm last one in the boat. I think, one wrong step, and me and my overstuffed vest will sink right to the bottom. My left foot hits the bottom of the boat and I plunk heavily onto the wooden seat.

The early morning fog lays like a shroud over the harbour and it's impossible to tell where the sky starts and the water ends.

Bruce Whitehall bellows: "Paddles up, and take it away!" and with a lurch we move forward. I am quiet and still — two words that are not usually used to describe me. While the women row, I fiddle with my sound recorder and camera which helps take my mind off every wobble of the boat. It's a good thing the lake is dead calm.

I wish I could say it was relaxing, but I was petrified. Fifteen minutes in and I already have a numb bum.  But I don't dare complain while being paddled around by women who've been treated for breast cancer.

I start chatting with nearby rowers Jamie House and Kitty Whelan. Jamie tells me that over the last two years, she's lost her mother, sister and son to cancer.

Kitty was as shocked as anyone to get her cancer diagnosis, but now believes her cancer was a blessing. "I think it was a wake-up call for me. It was, 'OK now Kitty you know, get your act together here girl.'"

When Ann Brazil was diagnosed 30 years ago, she was told she only had a few months to live. She's been an Avalon Dragon since their first meeting back in 2006. She helped build their dragon boat and is a boisterous participant in Slay the Gander.

There are dragon boaters on this trip from Nova Scotia as well. Sue MacDonald is one of the Cape Breastoners. She claims she's not a camper, but here she is.

"This girl does not sleep in a tent. But so many of my girls were going I said well I am not going to be the wimp that stays behind."

Gen Bishop signed on for the gruelling 40-kilometre trip from her hospital bed. She wasn't going to let a recent kidney removal stop her.

I hit it off with Amy Kavanagh Penney and Paula Birmingham at lunch on the first day. Amy just finished her last treatment and waited to register hoping she would be strong enough to paddle. She says this adventure has been like summer camp.

Bruce Whitelaw stands up behind me in the boat to peer through the fog and steer the boat. Every now and again he says, "Let it run," which signals the women to bring in their paddles and glide. The only thing you can hear is birdsong and the sound of water running along the hull.

We sing and paddle and laugh and count the strokes and by the end of the first day I stopped looking into the water wondering what would happen if I fell in? I knew the safety boats would fish myself and the Virgin Mary out.

Fear of deep water? Ha! Some of the courage these 80 women display has obviously rubbed off on me.

We disembark on the last day in a town called Appleton, having paddled about 24,000 strokes each. I'll go home wishing I had more time with these women, arms sore from hugging, and a dry throat from singing and calling out to the other boats across the water and a sore face from smiling.

I wonder if everyone else feels as emotional as I do. I spot Amy and Paula and go in for a group hug. I catch my breath and tell them, "I know I'm on the periphery of this trip, I don't have breast cancer, but I feel so emotional."

That could be the sweetest thing that anyone has ever said to me. I hope that I never have to paddle in their boat, but if that is where my journey leads, I can't think of any more wonderful group than these 80 awesome and courageous dragons.

Wanita Bates is a freelance writer, photographer and broadcaster in St. John's. She has won national and international awards for her work.