The provincial government says "significant progress" was made during a marathon meeting between Premier Dwight Ball and Indigenous leaders on the Muskrat Falls project.

Pledge made for further independent assessment of hydro project

Leaders of Indigenous governments in Labrador told anti-Muskrat Falls protesters to go home on Wednesday morning, boasting about significant progress that was made during a marathon meeting with the provincial government.

After an 11-hour meeting between Premier Dwight Ball and the Innu Nation, the Nunatsiavut government and the NunatuKavut community council, the provincial government says it has committed to "resolving several key issues" surrounding planned flooding of the Muskrat Falls reservoir.

An agreement announced in the early hours of Wednesday will see further independent assessment of the multi-billion dollar hydroelectric project, and a special committee that will look at ways to reduce possible methylmercury contamination. The provincial government also opened the door to potential further clearing of the Muskrat Falls reservoir.

Following the meeting, Nunatsiavut President Johannes Lampe — who just days ago called for a halt to the project — told protesters that they succeeded in their goals.

"I feel like the progress that had been made today will give the Labrador Inuit the opportunity to go back home to their family." 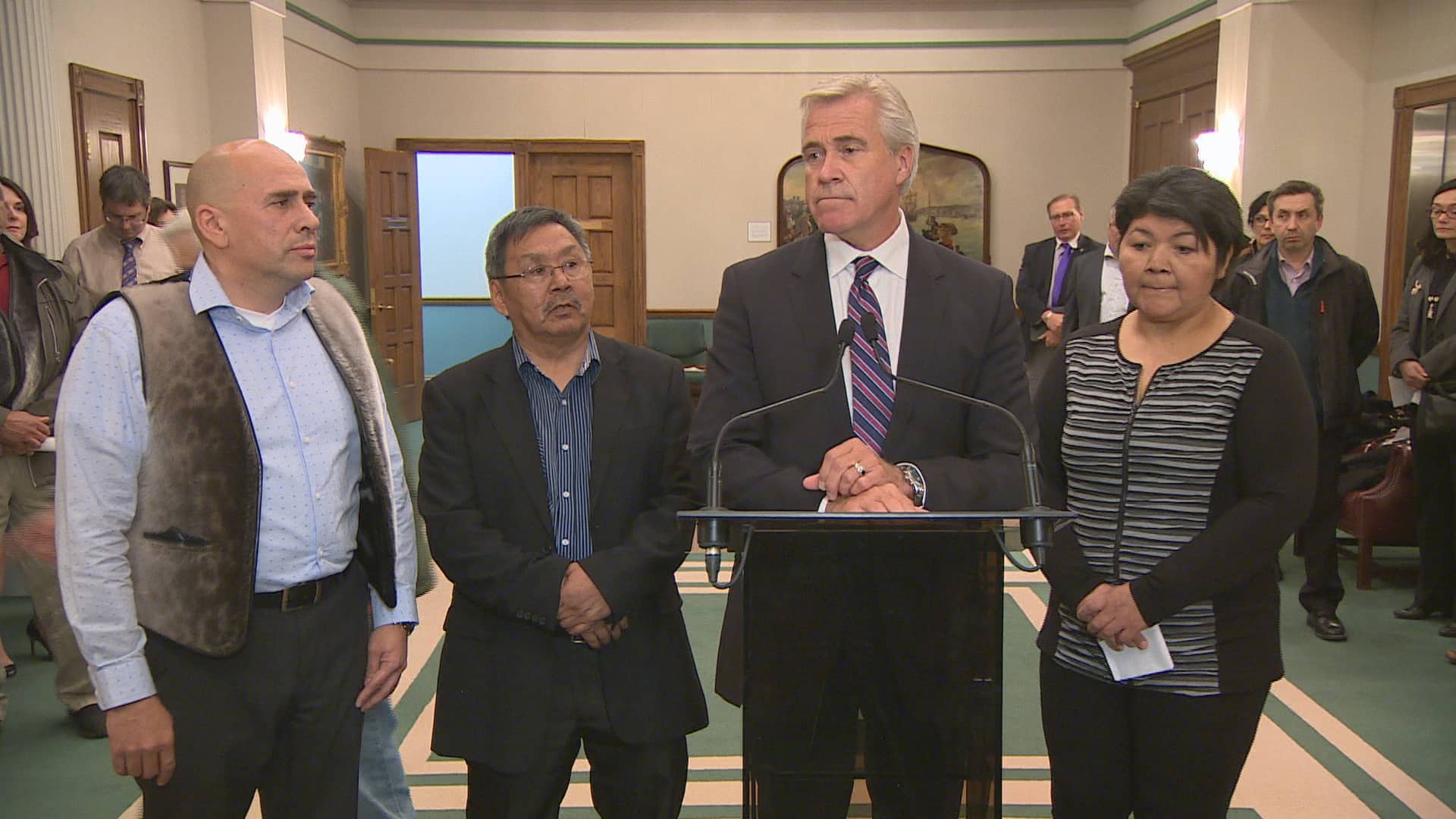 As of 2 p.m. on Wednesday, it appeared that all protesters who had been occupying the Muskrat Falls site had left.

Promise to release water from reservoir

According to a release, initial flooding of the reservoir to "the minimum acceptable level" will be pushed back a number of days until further "independent assessment confirms the timing and rationale of initial impoundment."

Nalcor, the province's crown energy corporation, has been ordered to release water from the reservoir in the spring of 2017 in order to facilitate further mitigation, which the provincial government says "may include clearing trees, vegetation and/or soil from the reservoir."

The four parties have also agreed to the establishment of an Independent Expert Advisory Committee, which will recommend options for reducing possible health risks from methylmercury contamination.

"Today's meeting was about one thing: the health of Labradorians," Ball said at about 2 a.m., after the meeting's conclusion. He said the parties reached "common ground on a lot of concerns, a lot of different issues today."

The meeting came following days of protest over Muskrat Falls, and were an attempt to address concerns about the megaproject — particularly those about possible methylmercury contamination.  Some protesters have been calling for more soil and vegetation clearing at the Muskrat Falls reservoir site in an effort to reduce the possibility of methylmercury entering the ecosystem.

Protests at the Muskrat Falls site in Labrador have gained national attention since protesters began blocking the entrance and occupying the project site last week.

Hunger strikers, including Inuk artist Billy Gauthier, celebrated the deal from Ottawa, where they were meeting with Labrador MP Yvonne Jones.

One of the supporters posted an image to Twitter with the caption "WE WON!"

After almost two weeks without food, Gauthier ate a meal of smoked char after midnight, according to a tweet from Jones.

In a statement, Nalcor chief executive officer Stan Marshall said he welcomed the agreement between the province, the leaders of the Innu Nation, the Nunatsiavut government and the NunatuKavut community council.

He said Nalcor's immediate priority is to bring operations at the Lower Churchill site back to normal and continue work to ready the site infrastructure for the winter months.

The costs of the new agreement for Nalcor and the effect on the planned schedule for the project are still being determined, said Marshall.

He added that Nalcor is "committed to completing the Muskrat Falls Project in a manner consistent with best practices for the safety of our workers and the public, and for the protection of the environment."

Todd Russell, the president of the NunatuKavut Community Council, said the measures announced early Wednesday morning had the potential to "make Muskrat right" — alluding to a slogan used by anti-Muskrat Falls protesters throughout the week.

He said the establishment of the Independent Expert Advisory Committee was a landmark development.

"The decisions that will be made, going forward, will not be at the whim of government," he said. "We have a commitment that if the science says that the soils must be removed … the soil will be removed."

Russell said he made enough progress to stop NunatuKavut participation in the anti-Muskrat Falls demonstrations.

Ball added that he had no estimate about what the additional oversight measures announced early Wednesday would cost for the beleaguered project.

The Muskrat Falls project is already significantly over-budget, and current Nalcor CEO has agreed that the hydroelectric project is a "boondoggle."

With files from Carolyn Stokes and Peter Cowan