Thousands of blood-sucking ticks found on bodies of Canadian moose 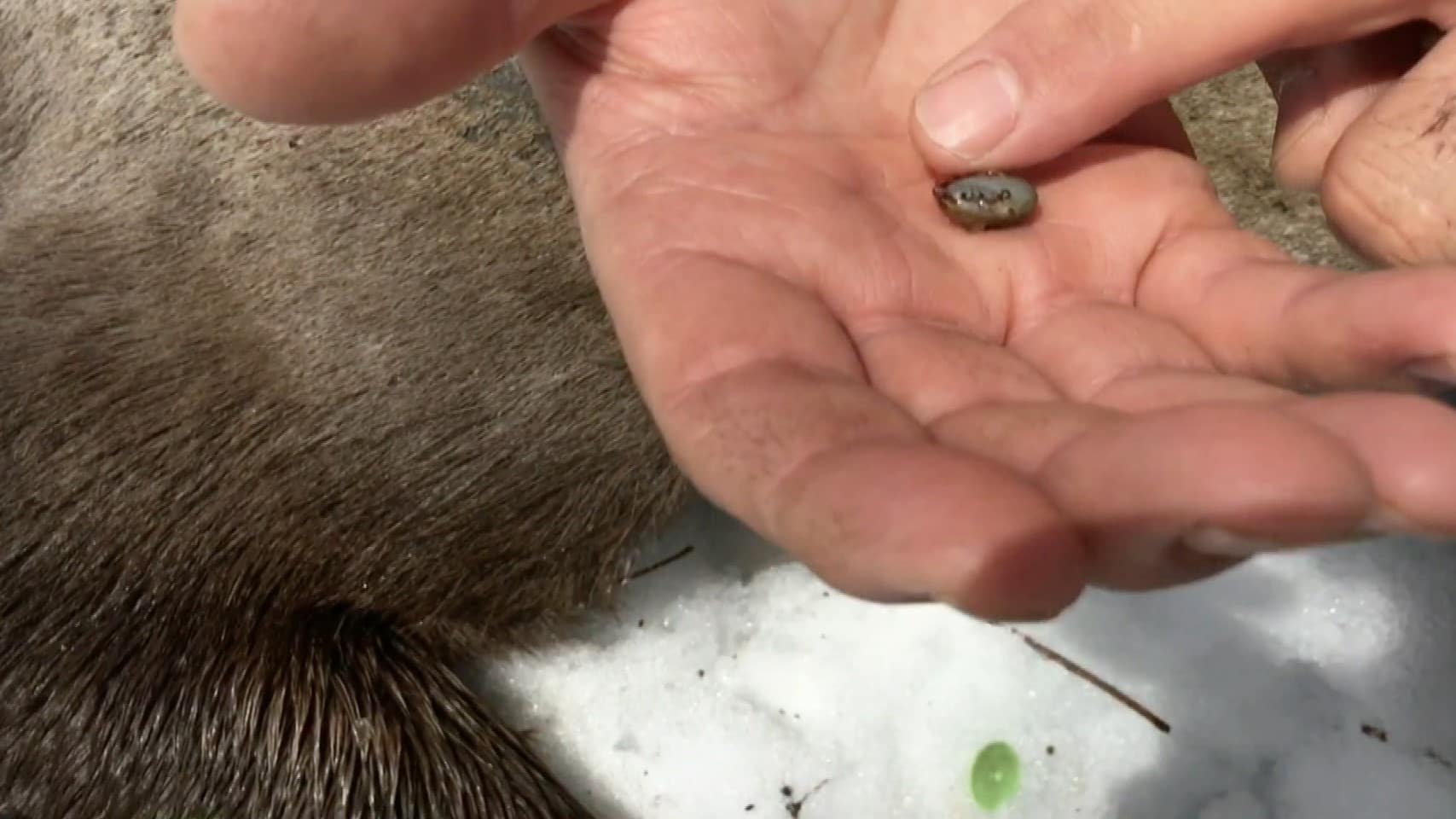 1 year ago
3:29
Scientists in New Brunswick and Quebec track moose to understand how climate change is altering the animals' lives.   3:29

Flying over southern New Brunswick in a helicopter, it doesn't take long to spot moose running through the snow in the forest beneath. What isn't visible from the air are the thousands of ticks invading their bodies.

In nearby New Hampshire and Maine, over a three-year period, scientists found an alarming 70 per cent of calves didn't make it through their first winter due in large part to tick infestation, according to a study in the Canadian Journal of Zoology. In some cases, up to 80,000 ticks were found on a single moose.

Their data show moose populations in both provinces have been healthy and growing over the past three decades, but wildlife biologist Serge Couturier says warmer winters and less snow cover make it easier for ticks to survive.

Ticks are an external parasite. They feed on the animal's blood, staying on their skin for the fall and winter, until they drop off to lay their eggs on vegetation. Unlike deer ticks, which carry Lyme disease, winter ticks do not carry diseases that can be transmitted to humans. According to the Canadian Wildlife Health Co-operative, the meat of infected animals is suitable for humans to eat.

Jean-Pierre Tremblay, a professor in the department of biology at Laval University in Quebec City and principal investigator on the moose research project, says unlike other species, such as white-tailed deer, moose tolerate the ticks until it's too late. Many moose end up weak with anemia.

Their skin also becomes inflamed and they change their behaviour, he says, spending more time grooming, rubbing against trees until their fur comes off and less time eating.

"That's a critical time of year, at the end of winter, when they have used most of their fat reserve, especially for calves," said Tremblay.

When the team spotted a moose from the air, Couturier shot a net from the helicopter to trap the animal — a technique he says is "very efficient, very safe" for the animals.

On the ground, a veterinarian was on hand to sedate the animal, monitor her breathing and temperature, and generally keep her comfortable.

"She's not really anesthetized, just sedated," said Dr. Benjamin Lamglait, after he had injected a 172-kilogram female calf. "We want her to be calm."

The moose lay on the ground in the snow, her tongue lolling out of her mouth, a mask over her eyes, also to keep her calm.

When the scientists pulled open her fur, they revealed dozens of ticks attached to a tiny patch of the animal's skin, literally sucking the life out of it. They estimated there were many thousands on her entire body.

When the team finished working on the moose they captured, the vet administered a reversal injection and within three minutes the animal woke up and walked away.

The team is in the process of weighing, measuring and tagging 116 moose with GPS collars in New Brunswick and Quebec. Half of them will be treated with a pesticide used to kill ticks and half won't. This will help them determine whether the moose are dying from ticks or some other factor.

"Our GPS collars, we can control them remotely so we can get a location once every hour, or once every several hours," said UNB master of science student Douglas Munn, who along with the other New Brunswick researchers is based in Fredericton.

Munn explained that the collars also track the animal's activity in 15-minute increments, which he says allows him to determine whether heavily parasitized moose differ in how they move and select habitats.

J.D. Irving Woodlands Division is one of 16 partners on the project, including Parks Canada, the Government of Quebec and the Natural Sciences and Engineering Research Council of Canada.

Andrew Willett, director of research for J.D. Irving, says the company needs to understand how climate change is affecting the wildlife on its lands so that it can understand how the habitat is changing in order to potentially adapt its forest management.

"We're planting a tree today, we're going to harvest it in 40 years' time," he said. "The climate is going to be completely different in 40 years than it is today."

The scientists say the work is important in part because the moose is such an emblematic animal in Canada.

"They're an important game species," said Munn. "But also because they're valued spiritually by First Nations and Native Americans in the United States and Canada, and also because of their role in ecological systems."

Kayla Hounsell is a network reporter with CBC News based in Halifax. She covers the Maritime provinces for CBC national news on television, radio and online. She welcomes story ideas at kayla.hounsell@cbc.ca.