Some schools in New Brunswick are trying to make a long school day a little easier on kids by investing in alternate seating. At Salem Elementary School, in Sackville, the newest purchase is a wiggle seat. 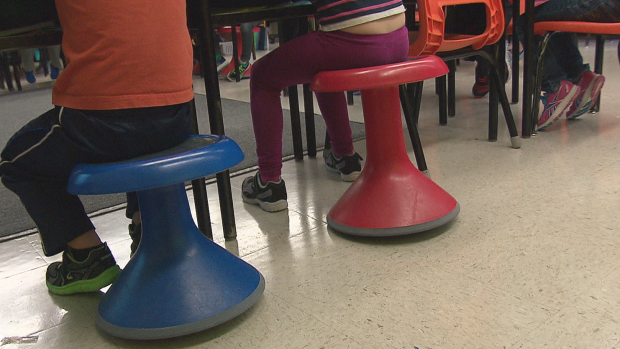 6 years ago
Duration 1:00
Schools, such as Salem Elementary school in Sackville, are trying to make it a little easier for kids by investing in what is called alternate seating. The newest purchase at the school is a wiggle seat.

Everyone was young once and can likely remember the struggles of trying to get through a school day without getting in too much trouble.

But some schools in New Brunswick are trying to make it a little easier for kids by investing in alternate seating. At Salem Elementary School, in Sackville, the newest purchase is a wiggle seat.

"I think they're amazing … because you can enjoy the seats and wiggle around while working," she said.

Wiggle seats are backless stools with a rounded base that allow kids to rock and swivel at their desk without disrupting the class. Emma-Grace's Grade 2 class has two of them.

"If people, if they're struggling, they can sit on them and they can get their wiggles and stuff out," she said.

According to child psychologist Sara Osborne, seats like wiggle stools can be about more than just fun.

"It helps their brain focus better, it helps them pay attention and helps them actually learn better, because their central nervous system is getting what they need," Osborne said.

Osborne said she sees a number of children who often feel the need to move.

"Instead of taking that away from them — because it's really a natural instinct that they need to do — we try to provide that simulation," she said.

Laurie Tingley, a second-grade teacher, said some students need the special seating more than others — and there are telltale signs.

"I usually notice that they're up, standing beside their desk, maybe sitting on their knees, jumping off their chair. But the stool helps them to sit quietly and focus back onto the task that they have," Tingley said.

Put to good use

In a nearby classroom, Krista Royama's Grade 3 and 4 split class are also putting the stools to good use.

"In the morning, always, two people come and ask for the wiggly stools so they have them for the day," Royama said. "Not one day have they sat over there unused."

Royama would like to have more wiggle seats in her classroom, but at $270 each, they're a precious commodity. The money for Salem Elementary's stools came from school fundraisers.

The Anglophone East School District, which oversees Salem, isn't sure how many wiggle seats are in use across the district; each school would have purchased the stools through fundraising, grants or donations.

Osborne, who was a school psychologist before opening her own practice, said it's a shame the cost can be prohibitive to some schools.

"I think that all schools should essentially have these or some type of stimulus that's going to help them. I would love to see all schools have them," she said.