'He was a hero': Fisherman who died saving whale saw rescue as a duty

Joe Howlett had just freed a whale tangled up in fishing gear when he lost his life Monday night.

Fisherman Joe Howlett knew the dangers of rescue work, but he was determined to save whales, friend says

Joe Howlett, a Campobello Island, N.B., man who lost his life Monday night freeing a whale tangled up in fishing gear, was not afraid of his work.

Howlett, who co-founded the Campobello Whale Rescue Team, was performing a rescue in the Gulf of St. Lawrence from a Department of Fisheries vessel based at Shippagan, on the Acadian Peninsula of New Brunswick, when he died.

In a 2013 interview, he had told CBC Mainstreet, that rescuing whales is "not a scary situation."

"I'm a fisherman and I've been fishing for half of my life, and I know what it's all about with ropes and things like that," he said at the time.

Steve Hachey, a spokesperson with the Department of Fisheries, said the rescue took place east of Miscou Island.

Howlett was in the boat when the suddenly liberated whale did something that led to the 59-year-old's death, although the details were not yet clear.

"The whale apparently swam away free from the gear," Jerry Conway, an adviser with the Campobello Whale Rescue Team, said Tuesday.

"The whale responded in a way that ultimately killed Joe."

Typically, a vessel will back off immediately after a rescue because whales do respond in seconds to being set free, Conway said.

Conway said it can take hours to disentangle some of the whales. While they are entangled they can't move very much, which makes it easy to work with them.

Rescuers are faced with all kinds of dangers, he said, including getting entangled in rope themselves, being dragged over the side of the boat, or being tipped into the water if a whale throws itself around and upsets the boat.

But Howlett, who co-founded the Campobello rescue team in 2002, felt a responsibility to save whales and was always thrilled when he could disentangle one from ropes.

"Once he finished the cut, and the rope fell away, you couldn't find a man more excited and happy than Joe for having  accomplished this, and seeing the whale swim away free," said Conway, a friend for 18 years. 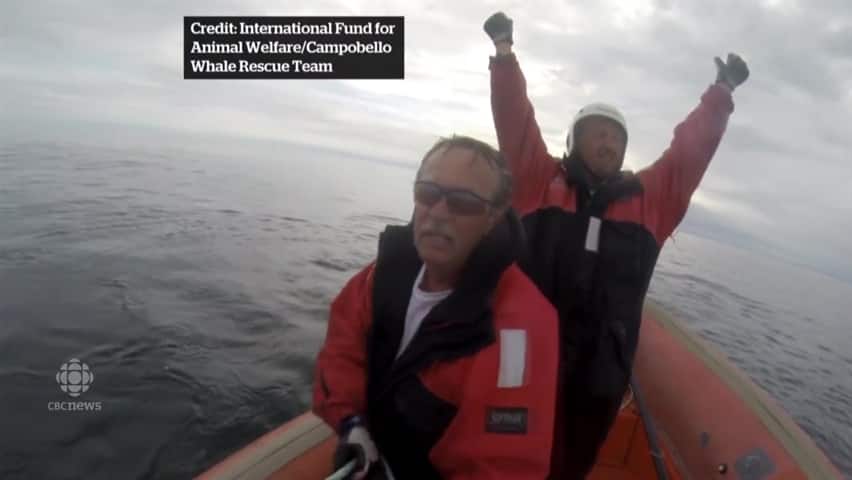 Howlett was originally from Chester, N.S., but moved to Campobello Island, where he was married. He was the father of two adult sons.

In the 2013 interview, he said he rescued two to three whales from entanglement every year.

The team received their training and equipment from the Department of Fisheries in Halifax, including being given a 26-foot, high-speed zodiac boat, which they use to travel across the Bay whenever they were called to a rescue.

Once they arrived, they used extension poles with sharp-bladed, hooked knifes attached to the ends to cut the whales free.

The sharp blades don't hurt the whale, but cut through the ropes, said Howlett.

Then they "hang around to make sure everything is OK and the whale is happy," he said.

Somehow fishermen try to make a living and they do what they do, and they have to, and whales seem to get caught every once in a while. And when it does, we are there to help out.- Joe Howlett

But the whales still got caught in them, often rolling afterwards, which made matters worse, he said.

"Somehow fishermen try to make a living and they do what they do, and they have to, and whales seem to get caught every once in a while," he said. "And when it does, we are there to help out."

Howlett added how thankful he was that whale watching cruises often stuck around until the rescue team arrived.

Rescuers a lifeline for whales

Danielle Dion, a naturalist with Quoddy Link Marine Whale Watching in St. Andrews, N.B., said she did not know Howlett personally but knew of his work and had watched the team rescue whales several times in the Bay of Fundy.

"Who better to save these whales than fishermen, they know the ropes, they know the knots and the gear and this is volunteer work they do, to go out there and help these animals," she said.

But she also stressed that "we need to figure out a way to prevent the entanglement from happening in the first place."

The rescue teams "put their lives on the line to save these animals and so many people don't know what is happening with these whales," she said, adding that she hopes Howlett's death will not affect the work of the rescue team.

In a statement Tuesday, Fisheries Minister Dominic LeBlanc paid tribute to Howlett and his commitment.

"Taking part in whale rescue operations requires immense bravery and a passion for the welfare of marine mammals," LeBlanc said. "We have lost an irreplaceable member of the whale rescue community. His expertise and dedication will be greatly missed," he said.

Monday was just another day at work for Howlett.

When he left Campobello, an island off the Maine coast in the Bay of Fundy, he planned to guide a research team surveying the increased number of right whales showing up in the Gulf of St. Lawrence.

They were all aboard the Shelagh, a vessel owned by the Canadian Whale Institute, and Howlett was captain.

Depending on the weather, he expected to stay out another three or four days, but the Department of Fisheries and Oceans asked for his help disentangling a North Atlantic right whale last week and another whale on Monday.

Both whales were caught in snow crab gear in the same area near Shippagan, a problem that has alarmed rescuers and scientists this summer.

When a whale is caught in gear, experts assess how badly it's entangled and then decide how to approach it, Conway said.

'He was a hero. He knew he was putting his life on the line with a  70-tonne  whale that is upset.' - Jerry Conway, friend of Joe Howlett

The rescue can take up to an hour and involves about four or five people using inflatables to cut the whale free.

"It's a step-by-step training process for people … and to get to the position of doing the cutting, it takes time and practice and work," Conway said.

Seven right whales were found floating dead in the gulf, likely after getting caught in fishing gear or colliding with vessels, scientists have said.

With only 525 North Atlantic right whales remaining, according to the Marine Animal Response Society, the "unprecedented die-off" represents more than one per cent of the population.

One of the three dead whales examined about two weeks ago got tangled in fishing gear, and two others showed signs of trauma from ship collisions, but it's not clear whether those collisions happened before or after the animals died.

And Conway has no doubt Howlett knew what he was doing while out on the job Monday.

"He was a hero," he knew he was putting his life on the line with a 70-tonne whale that is upset … trying to deal with a wild animal."

While he was known for his rescue work, Howlett was also recognized for his commitment to the people of Campobello.

"He is an integral part of the community, not only as a fisherman but a house painter, and he was quite the entertainment at a house party."