Indigenous woman connects with her roots through maple syrup business

Jolene Laskey runs Wabanaki Maple, a maple syrup operation on the edge of Tobique First Nation in New Brunswick, where she connects with her heritage while doing something for her community

A Wolastoqi woman is using maple syrup as a way to connect with her roots and do something for her community.

Jolene Laskey is the president of Wabanaki Maple, a maple syrup manufacturer at the edge of Neqotkuk, also known as Tobique First Nation.

The locally sourced syrup is aged in repurposed oak barrels acquired from Kentucky whisky distilleries. Depending on the barrel, the syrup can take on hints of bourbon, rye or charred oak.

Laskey said the idea for maple syrup products took a little while to come to her after she decided she wanted to start a new business. She found inspiration in her backyard.

"I knew that I wanted to pursue a new venture," she said. "I took a little while to figure out what it was, but maple syrup being a Canadian product and it's in our backyard here in New Brunswick … that's where the idea came together.

"I was inspired by our roots. Maple syrup has been around for centuries, and I felt that being Indigenous and the history behind Indigenous culture and maple syrup, I wanted to share that through our maple syrup products." 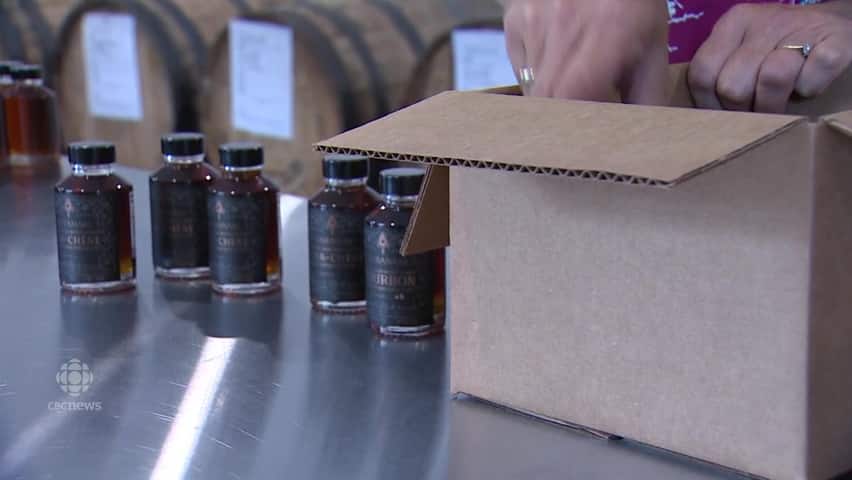 Last month, Wabanaki Maple was one of the winners of the FedEx Small Business Grant Contest, which saw Laskey's business win the grand prize of $30,000, a place in a brand-marketing workshop valued at $10,000, and a meeting with the president of FedEx Express Canada.

"I was really, really, really shocked," she said. "First surprised and super, super excited. Very emotional, moment when I heard that the company had won the grand prize."

Laskey said the grant will help Wabanaki Maple acquire some much-needed equipment such as new barrels and more raw materials. The company now has five barrels, which can hold up to 200 litres of syrup.

"It's been challenging as a First Nation and entrepreneur just trying to move forward and we've been doing a lot of bootstrapping."

In addition to equipment, Laskey said, the prize will also help her business with expanding its plant and team, which has only three people. She said she hopes to hire people from her community, where job prospects are scarce.

"It's a way for me to give back in a positive way. We want to ensure a healthier environment for our next generations. We're looking at other initiatives to help support those goals for us, as well as, you know, providing jobs within the community.

"There's so many other great initiatives and organizations that we are looking at to support and to promote our culture, and our environment through our company."

Laskey, who has been selling the syrup since November 2018, got her start with the Joint Economic Development Initiative's Indigenous business incubator program.

Her small plant is located on Neqotkuk, along the Tobique River, where all the aging and bottling is done.

Laskey said the company always has a batch ready to be sold, but she wouldn't reveal the trade secret of how long the syrup is aged for. A 200-millilitre bottle of barrel-aged bourbon maple syrup is listed for $19 on Wabanaki Maple's website.

Though the maple syrup is outsourced, Laskey said that as the company expands she would like to "close the loop" and eventually produce her own syrup and offer a "visitor experience" on the Wolastoqey community.

This would be an opportunity to show how Indigenous people traditionally harvested maple syrup and bring tourism into the community, she said.

Wabanaki Maple sells its products through its website and at some stores in Saint John, Fredericton, Grand Falls and Neqotkuk.