The Ville Cooperative's passive solar greenhouse uses aquaponics and geothermal heating to make it possible to grow tomatoes in February.

Growing tomatoes in February in New Brunswick might sound like a fantasy, but the Ville Cooperative in Fredericton and a University of New Brunswick PhD student have made it happen.

The greenhouse is heated with passive solar and geothermal techniques, which keep the temperature at around 30 C even on the coldest days in winter.

In addition to growing vegetables year-round, the greenhouse also uses goldfish to feed its plants with an aquaponics growing system.

Adam Weaver, community development co-ordinator at the Ville, said the greenhouse is just one of the innovative agricultural practices the program uses. 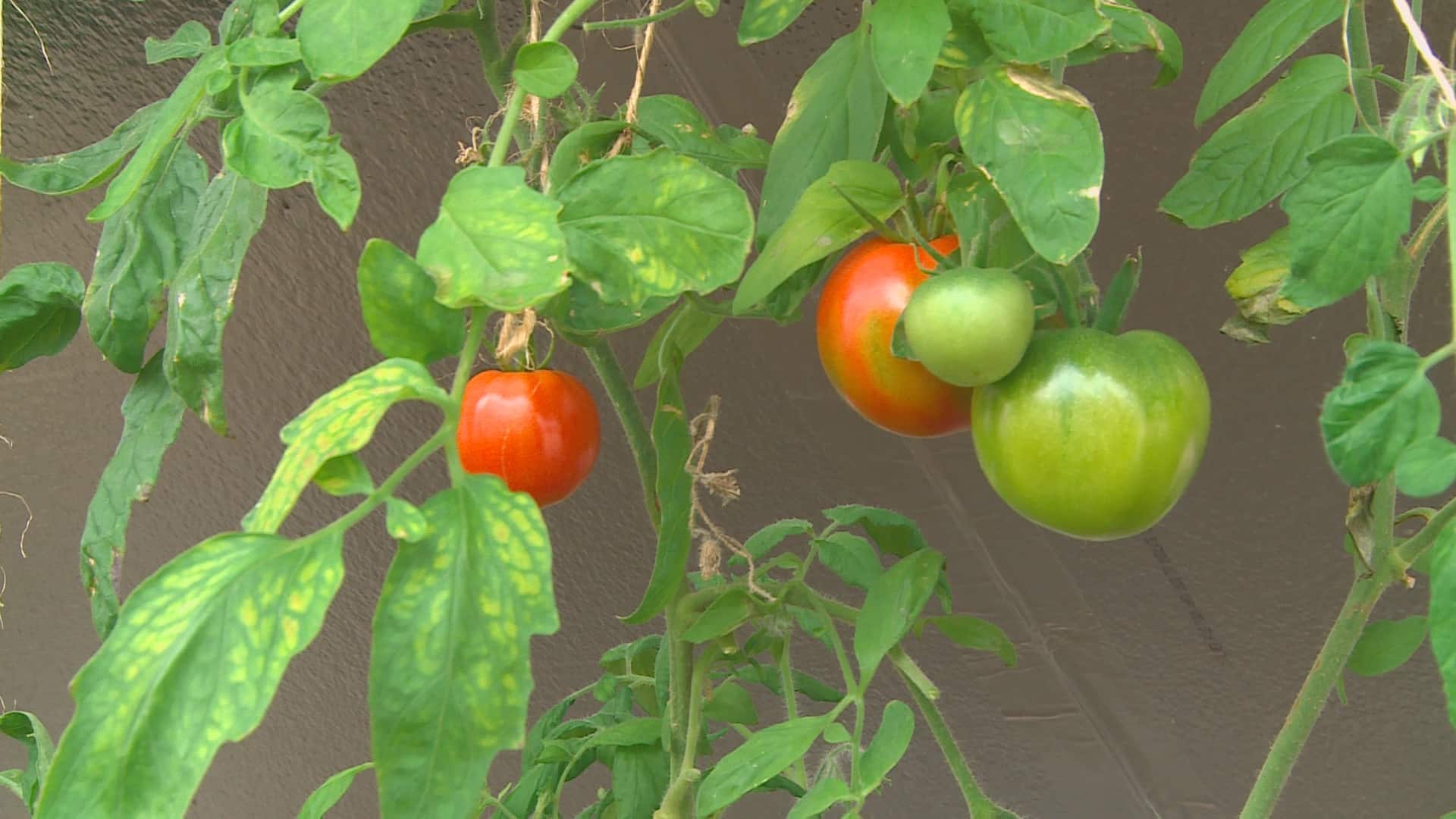 1 year ago
0:52
The Ville Cooperative's passive solar greenhouse uses aquaponics and geothermal heating to grow food all months of the year. 0:52

"This system is an educational tool to help people see that, yes, we can actually grow all four seasons in Fredericton, rather than the two or three months that most people think you can grow vegetables," Weaver said.

The greenhouse was designed by Andrew Mathis, an engineering student at UNB. He shared his plans with the Ville and has been helping them maintain the greenhouse for the past few years.

'Do not eat the goldfish'

The greenhouse combines several types of growing and heating technologies, including aquaponics, which grows fish and plants together.

Fish waste is rich in nitrogen, which is then pumped up into the plant beds through a layer of rocks covered in bacteria. They convert the raw nitrogen into a form the plants can use.

The water is then filtered through the root system and back into the tank as clean water.

"The bacteria is really the third part of the system," Mathis said.

Cat Colley, an agriculture intern at the Ville, feeds the fish every morning. "Basically if they swim up to the top looking for food then they are usually OK."

The Ville's system uses goldfish, but most industrial scale operations use edible fish like tilapia because they grow quickly.

They chose goldfish because they are hardy fish and prettier as an education tool. "We definitely do not eat the goldfish," Colley said.

She also does a partial water change in the tanks each week and a full cleaning every month or so.

Colley said while the initial setup of a greenhouse like this is hard work, it is easy to maintain once it is built.

"It's practical on a large scale but also on a small scale, which I like," she said.

The aquaponics system uses 1,000-litre tanks that are set partially into the ground to save room and also regulate the temperature of the tank.

Mathis said the greenhouse faces the winter sun to heat the structure in the colder months. The north side of the greenhouse is heavily insulated to maintain heat.

His design also utilizes geothermal technology to regulate temperature from day to night, as well as winter to summer.

"We are able to cool air in the summer and heat air in the wintertime, and that process allows us to store heat in the soil for nighttime use or for use in the winter," Mathis said.

Last year, there were only three days where the temperature inside the greenhouse got below 7 C, he said. Even on -30 C days, it got up to 40 C inside.

This is because plants do not need to expend as much energy growing large root systems, since all the nutrients are accessible right at the root.

He said the greenhouse has performed better than he thought it would.

"I thought the idea would kind of be to maintain some plants, grow some lettuce through the winter but through last winter they were growing tomatoes in February."

Some of the plants in the greenhouse are original to when the structure was built a year and a half ago.

Mathis said the necessity of plants for food is what drives and attracts him to his work. "Growing food is essential."

The food produced by the greenhouse is sold at the Ville's farm stand.

With files from Graham Thompson