Jason Lawson was driving over frozen ice when he hit a weak spot and sank into the icy water, totalling his Nissan Pathfinder, as he admits in a Kijiji ad. 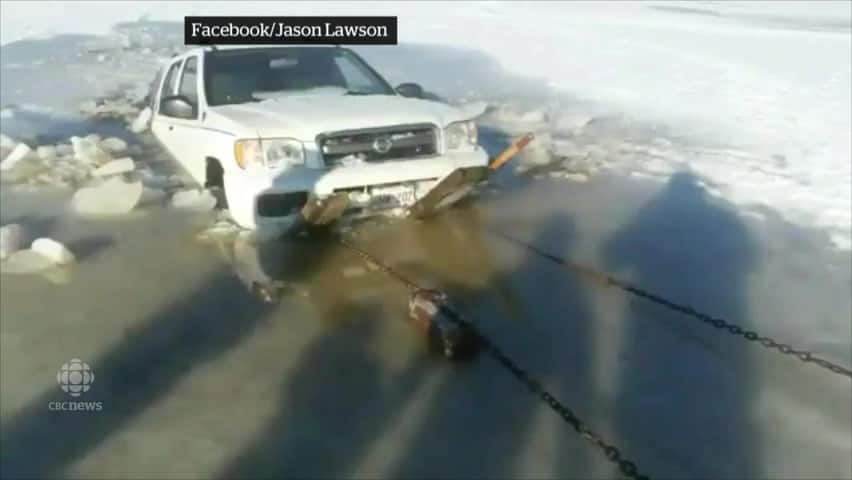 4 years ago
0:50
Jason Lawson has gone smelt fishing all his life, but what happened to him on the frozen Richibucto River this month was a first. He and his Nissan Pathfinder fell through. 0:50

Jason Lawson has gone smelt fishing all his life, but what happened to him on the frozen Richibucto River this month was a first.

He and his Nissan Pathfinder fell through.

Earlier that day, the Kent County man had cut holes in the ice for smelt shacks, so he felt it was thick enough for a safe drive farther along.

It was like squeezing a marshmallow through a piggy bank.- Jason Lawson

"There was over a foot of ice where I cut the holes," said Lawson, of Main River. "So I assumed there was lots of ice further up on the flats, and I assumed wrong."

The SUV broke through the ice and sank.

Lawson wasn't hurt but had to squeeze himself out of the truck's window and walk home wet and cold.

"It was like squeezing a marshmallow through a piggy bank," he said.

Lucky for Lawson, the water was only about a metre deep, but it didn't minimize the damage to his vehicle, which he said is pretty much a writeoff.

"I'm guessing it's going to wind up at the junkyard because that's probably all it's good for," he said.

If the damage done by the cold water and ice that poured in wasn't enough, towing it through the ice and back up on land was the nail in the vehicle's coffin.

In case his trash was someone else's treasure, Lawson did post an ad to Kijiji, titled "Nissans don't float."

The self-deprecating advertisement fills potential buyers in on what happened: "I went for a tour on the ice and ended up in Davy Jones' locker."

And it includes some of the Pathfinder's best features: "It even has 4 new tires, which didn't help one bit when we tried to pull it out."

Lawson said he would take the best offer or make a trade, as long as it's not for ice skates, ice cubes, ice coffee or anything to do with ice.

No doubt, he found humour in the accident and said there was a take-away.

"Let someone else go first, especially if you don't like them much," he joked, before adding it's a good reminder to take out your chisel to check ice depth every so often.

The incident won't deter him from his hobby.

In fact, he's been since.