Fredericton police are "greatly concerned" about the stunts being carried out by an 18-year-old in the city.

Fredericton police are "greatly concerned" about the stunts being carried out by an 18-year-old in the city.

Noah Kingston calls himself an "urban climber" and has posted videos on YouTube of himself navigating the underbelly of the Princess Margaret Bridge, climbing a local building under construction, tiptoeing along the railing on the top floor of a parking garage, and others.

Kingston wears no safety gear, has only an old pair of sneakers when he climbs, and uses a GoPro camera to record his exploits. 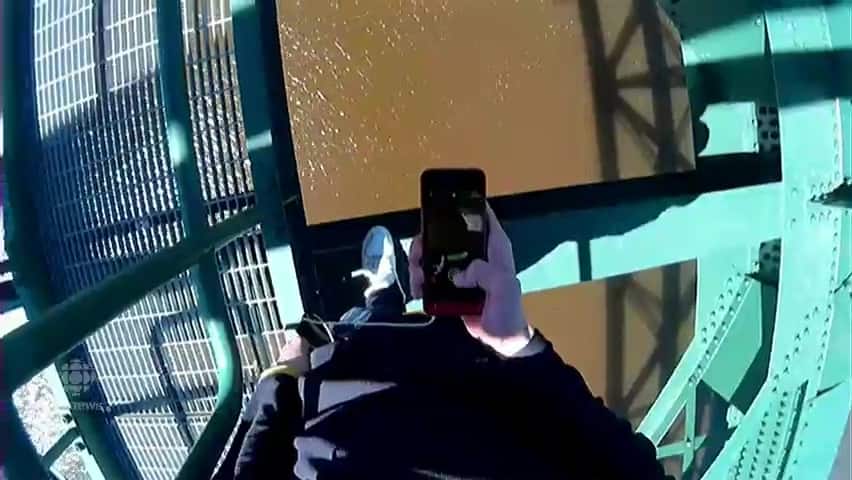 Police worried about video of climber on Princess Margaret Bridge

5 years agoVideo
1:38
"Urban Climber" posts videos on YouTube of him navigating the underbelly of the Princess Margaret Bridge 1:38

"It started out, really, as an adrenaline rush," Kingston said. "But after that wore down it turned into something more for enjoyment.

"You don't think about anything else but your situation. There's no other thoughts and it's calm and relaxing."

Kingston said family members have tried to get him to stop his adventures.

"There was a long talk for a few weeks, they thought I was suicidal," he said. "But the more I climbed, the more they realized it was just a sport I was into."

His family says there's not much they can do.

"We've all done stupid things when we're young I guess," said his father Miles Kingston. "I'm not too keen about him winding up dead though."

"You can see he's always thinking about it," said Edith Kingston, Noah's grandmother. "And he gets all these people on the internet telling him how good he does. I don't think he needs that. It builds him up more. He talks about going to Toronto and China to climb."

"I do wish he'd find a different hobby," she said.

Fredericton police have escorted Kingston away from his climbing sites when he returns to the ground, Noah said.

"While not actively investigating any complaints at this time, we are greatly concerned for the activities that play out in these videos," wrote Bartlett in a statement. "This type of reckless behaviour is very dangerous, not only for the person, or people involved, but also for bystanders, or first responders, should something go wrong."

Climbing beneath another New Brunswick bridge is believed to have proven deadly for another teen 22 years ago.

On Dec. 19, 1993 Alexander Edmond Sivret fell from the Burton Bridge, which crosses the St. John River near Oromocto. The girlfriend of the 13-year-old said he fell to his death when climbing along the catwalk running under the bridge.

With files from Shane Fowler