Professors from across Canada joined striking University of New Brunswick faculty on the picket line in Fredericton on Friday to show their support. 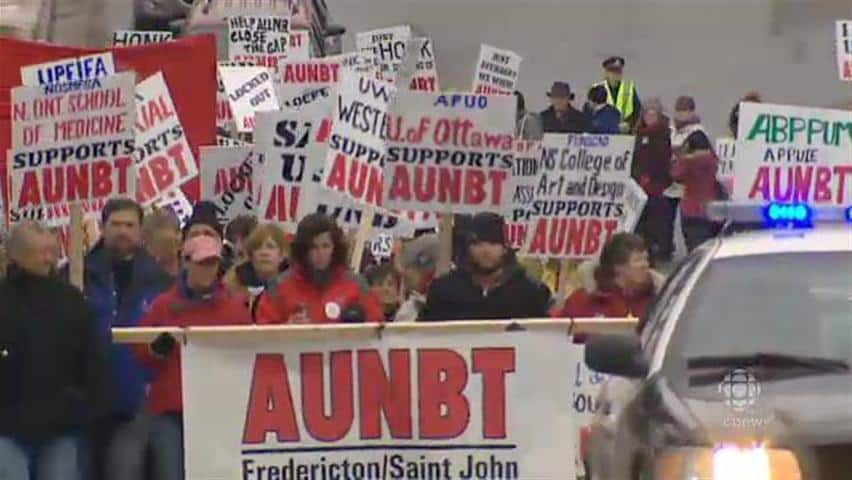 7 years ago
1:50
Academics from 12 universities across Canada joined striking UNB faculty in Fredericton on Friday in a show of support. 1:50

Striking University of New Brunswick professors got support from colleagues across the country on Friday.

Professors from 12 other universities joined them for a noon hour rally and march at the strike headquarters in Fredericton.

Earlier in the day, negotiators from both sides met, but there is no word of when they will meet again.

There was some good news for students, however. The university says the deadline to pay this semester's tuition has been pushed back indefinitely.

An estimated crowd of more than 200 people gathered at the event.

The Canadian Association of University Teachers also contributed a $1 million cheque to the cause during the rally.

Miriam Jones, president of the Association of University of New Brunswick Teachers, said the money will go toward one of the union's biggest expenses — providing strike pay to those on the picket line.

"We've got about 570 odd members, people who are doing strike support are getting $700 a week. So actually, it sounds really stupid to say, but a million dollars wouldn't get that far," Jones said.

Full-time professors, teaching staff and librarians at UNB's campuses in Fredericton, Saint John, Moncton and Bathurst walked off the job Monday over wages and working conditions. They were locked out by the administration on Tuesday.

"We're here to show solidarity with them," said Lawrence Hale, of the UPEI Faculty Association. "We want to make sure they get a good agreement so the students of UNB continue to get a good education," he said.

"We are delighted to have the support of so many other faculty associations," said Jones.

The Association of University of New Brunswick Teachers is seeking an increase of more than 23 per cent over four years in order to bring salaries in line with those at Canadian universities of comparable size.

The University of New Brunswick is offering a 9.5 per cent increase over the same period.

"There are people who think that we're making more than the average New Brunswicker does, and I can't deny that," said Bill Kerr, one of the UNB faculty members.

"They resent us for that, but on the other hand we are in a federal job situation," he said. "UNB has to offer comparable wages to other universities in the country and even outside the country in some cases. And if they don't, well that threatens particularly our research and graduate programs, but everybody."

No plans to intervene

The UNB Student Union has said the strike could cause significant problems for students if it lasts more than one month. It's pushing for student rebates if the strike stretches on.

But Premier David Alward has said the provincial government isn't about to get involved in trying to settle the strike at this time.

The government has provided a mediator who will continue to help both sides reach an agreement, Post-Secondary Education, Training and Labour Minister Jody Carr said in a statement late Thursday.

"I encourage the parties to make every effort to resolve this dispute so that students can finish the winter term with the least disruption possible," Carr said.

Under the existing contract, the starting salary for an assistant professor in 2009 was $60,948 and the salary floor for a full professor was $94,397.

​The salary ceiling for a professor at UNB currently stands at $150,510 under the existing contract.

About 60 per cent of the faculty now earn more than $100,000 a year, according to the administration.