A project at UNB is trying to find a way to end phantom pain. The goal of the research is to treat the phantom pain through new technology.

Researchers at UNB are trying to find a way to end the phenomenon of phantom pain in people who have had a limb amputated. It's part of an international project underway at 10 different sites around the world.

Phantom pain is pain that is felt in a limb after an amputation. The pain can be slight, but it can also be debilitating and can last for hours.

It can affect people's sleep, the ability to wear a prosthesis, and function in day-to-day life.

There is some medication that helps, and sometimes doctors use mirror therapy, which over several sessions tricks the brain into believing the limb is there, quieting the signals causing pain.

But but that doesn't work for everyone. This new method uses that same principles that are at work in mirror therapy, but brings in virtual reality to help. 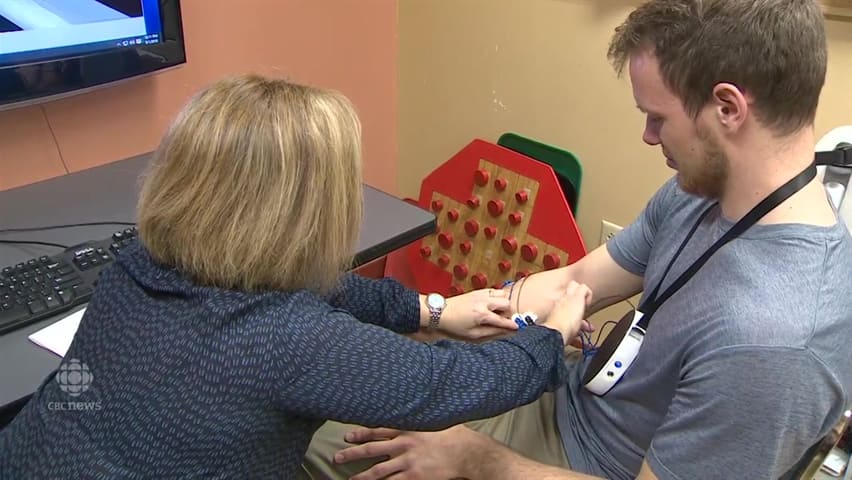 3 years ago
1:08
A project at UNB is trying to find a way to end phantom pain. The goal of this research is to treat the phantom pain, through new digital technology. 1:08

"I think it has the potential to be really significant," said Dr. Jon Sensinger, the associate director of UNB's Institute of Biomedical Engineering.

Electrodes hooked up to a patient receive the information coming from the muscles, allowing the patient to imagine their virtual limb moving, which they see on a screen.

The therapy has the patient come in 15 times for two-hour sessions. So far research has shown the pain doesn't come back.

"We hope that the treatment, the 15 sessions, is enough to have a long-lasting effect on the pain," said Wendy Hill, a research occupational therapist at the Institute of Biomedical Engineering. She is working with a patient in the study.

"Long-term, I think this system is going to a product that people will be able to purchase either for home use or in a clinic use, to come back and maybe do a booster session where they go back and do this treatment again to help control pain."

UNB is the only Canadian site taking part in the research.

Sensinger said the university got involved after he spoke with Dr. Max Ortiz Catalan, founder of the Biomechatronics and Neurorehabilitation Laboratory at the Chalmers University of Technology in Gothenburg, Sweden.

Dr. Catalan did an initial study using the same principles as mirror therapy, but implementing virtual reality technology. UNB is the first site to hold trials on the potential treatment.

"There's two groups, and the evaluators who are assessing phantom pain don't which group you're in, so it's a double blind study. The participants don't know, the evaluators don't know, so from a medical standpoint that's a much higher level of saying this truly works," said Sensinger.

"That's what the medical field wants to see so we're optimistic it will work based on that preliminary study, but until the study is done we won't know."