New Brunswick appears to be the newest, year-round, home for the 'ultimate scavenger.'

Spotted for the first time around 30 years ago, turkey vultures may now be here for good

New Brunswick appears to be the newest, year-round, home for the 'ultimate scavenger.'

The turkey vulture, a species first spotted in the province about 30 years ago, has begun staying in New Brunswick throughout the winter, despite not having feathers on its head — or on its feet, as some birds do.

"For a long time, I was wondering, why wouldn't they just migrate? It would be easier," said Jim Wilson, a bird expert credited with having documented some of the first turkey vultures in the province. "But they haven't. Some of them have decided to tough it out."

Often mistaken for eagles when in flight, the turkey vulture's naked red and pink head and skinless beak is unmistakable and, some would argue, downright ugly.

While its featherless head is well-adapted for plunging into the dead bodies of animals it scavenges without getting blood caught in its plumage, the raptor is not well-suited for cold New Brunswick winters.

But despite being bald in the dead of winter, the species appears to be here to stay throughout the year.

"They definitely are," Wilson said. "We have the biggest population that we know of in the Kennebecasis Valley. And we do a Christmas bird count every year in late December and early January.  And we can track and it's consistent."

Turkey vultures are renowned for their incredibly keen sense of smell, something Wilson said gives them an advantage when scavenging carcasses for food.

"They can smell something as small as a mouse, under a pile of straw, from a couple hundred feet — or more — in the air," said Wilson. "Just from a little bit of odour that might come. And that allows them to find dead things in forested areas."

Why the turkey vulture has decided to brave harsh winter is a question researchers have yet to answer, but Wilson says they may be taking advantage of human waste. 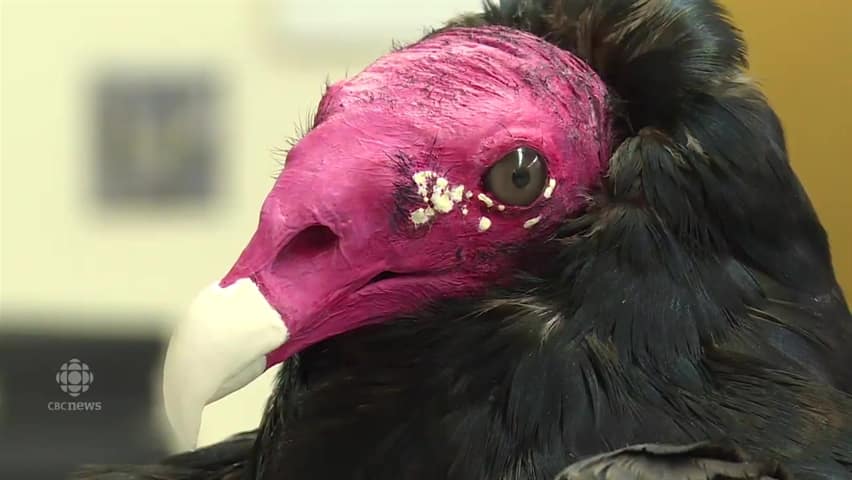 New Brunswick turkey vultures are known as the ultimate scavengers

3 years ago
0:47
New Brunswick appears to be the newest, year-round, home for the 'ultimate scavenger.' They first appear about 30 years ago. 0:47

"They've been going down to various dumpsters and food outlets in the Quispamsis area and feeding in the open dumpsters where they can find things that people throw out," said Wilson.

"They're very intelligent, they're very quick to learn these things, so that may have been an inducement to start to overwinter if they've been feeding there in the fall, and the food source has been consistent.

In its move north from states as far south as Florida, the turkey vulture brings with it a series of behaviours that sets it apart from other birds in the province.

"One of the turkey vultures main forms of defence is actually to vomit all over itself, whatever the last thing it ate was — which is usually pretty terrible," said Andrew Sullivan, a zoological preparator with the New Brunswick Museum.

"Plus, adding in a very strong stomach acid that they have is a pretty good deterrent to any animal that has a strong enough stomach to try and face them."

The vultures also don't build a nest like many birds, instead opting to lay their eggs underground in caves and crevices.

"I was very lucky to be involved in finding one of the first nests," said Wilson, who recalls locating it back in 1988.

"It was in a hole under a pile of rocks in the base of a cliff in a remote spot, high up on a hillside," said Wilson. "And those birds used that nest, and it was full of porcupines, that rockpile. Which is an interesting strategy, because I would have a feeling that would deter predators perhaps."

Wilson said the birds returned annually to the same nest, alongside several generations of porcupines, for the next decade.

"If you put eggs somewhere in another cavity somewhere that didn't have the presence of porcupines, I can pretty much guarantee it that raccoons would find it in short order," said Wilson.

"And turkey vultures are not aggressive birds. They are extremely passive. So, they're not going to defend a nest against a predator. They're just going to get out of there if they can and leave the eggs where they are."