The worst of the spring flood is in the rear-view mirror, but officials are still cautioning New Brunswickers against the hazards that high and contaminated water can bring.

Before the week is over, water levels throughout the St. John River system should recede to near or below flood stage and the closed section of the Trans-Canada Highway should be open again, say emergency officials.

The worst of the spring flood is in the rearview mirror, but officials are still cautioning New Brunswickers against the hazards the high and contaminated water can bring.

"We're turning a corner," said Greg MacCallum, director of the New Brunswick Emergency Measures Organization. "I think that's obvious to everybody, but it's a long corner.

"Make no mistake. There's a lot of work to be done. We're concentrating on safety today, we will be every day. But we'll also be turning our attention to starting our cleanup collaboratively with a whole bunch of levels of government and agencies that will be contributing to that effort." 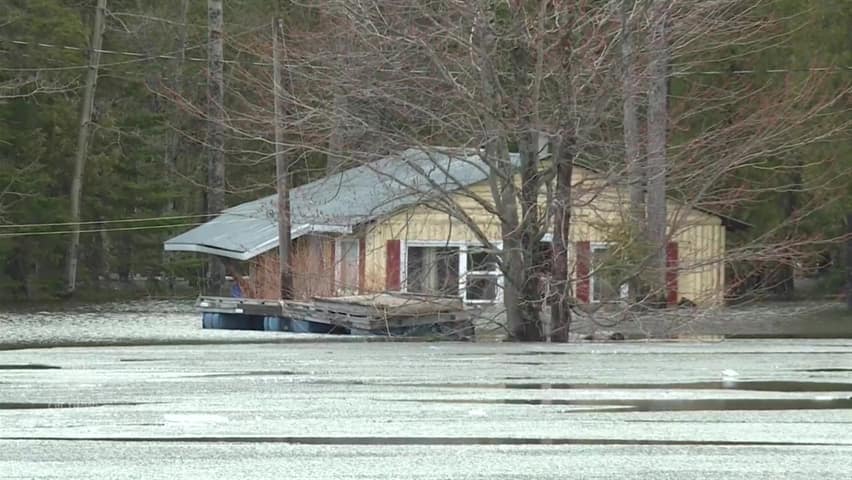 This community has been stranded for a week because of floodwaters

2 years ago
0:57
The five families that live in Newcastle Centre have been cut off because of Grand Lake floodwaters. 0:57

The Red Cross announced 486 households and 1,207 individuals have registered with the organization.

Speaking at a news conference Tuesday afternoon, MacCallum said the entire river basin is experiencing a "slow but steady decline."

The river level in Fredericton remains nearly a metre above the 6.5-metre flood stage, but the provincial five-day forecast suggests that level will drop to 6.3 metres by Friday morning.

Maugerville and Oak Point are also expected to return to below flood stage on Friday and Saturday, respectively.

In Saint John, the retreating floodwaters will reach the 4.2-metre flood stage by Saturday. The river level on Tuesday is 5.18 metres.

Water levels in Jemseg, Grand Lake and Sheffield-Lakeville Corner are dropping but remain more than a metre above their respective flood stages. By Saturday morning, the water is projected to be about a half a metre or less beyond flood level.

Jasmin Boisvert, water resources specialist with the Department of Environment and Local Government, said the weather is expected to co-operate this week with dry and cool conditions and no rain until the weekend — and even then, only minor amounts are in the forecast.

However, wind from the northwest could gust upwards of 40 kilometres an hour in the next 48 hours, he said. 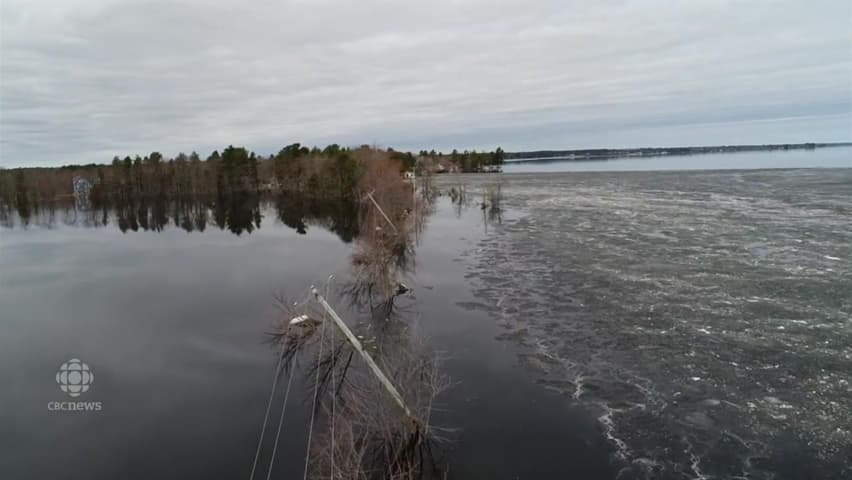 Chunks of ice have knocked down a series of power poles

2 years ago
1:00
NB Power linemen, moving between locations on a small boat, were conducting checks on affected buildings and disconnecting power where needed. 1:00

"This is especially important for the Grand Lake area and the expected wave activity," Boisvert said.

EMO said at least one cottage was knocked off its foundation, while many other structures saw extensive damage, leaving plenty of debris floating about.

Waves continue to pound the lake's eastern shore on Tuesday, testing sandbags structures and eroding the earth of some properties.

But the home of Dean and Hannah Yeomans appears safe so far after the couple spent more than $20,000 last summer building a 250-foot rock wall to protect their home.

"If we hadn't had done that, we probably would have lost our home," Dean Yeomans said. "So, it's much more comforting this year to have the wall in front of us."

"And we had wonderful people come and try and help us with sandbags, but they agreed everything, everything was just dropping off the end. This year, the wall held up and I feel bad for people who weren't as fortunate as we were."

The Department of Transportation and Infrastructure said the closed section of the Trans-Canada Highway could reopen this week, as floodwaters have receded from the pavement and debris cleanup is underway.

The highway is still closed to through traffic between Oromocto and River Glade — the detour through Saint John remains in place — but access has been open to residents from both directions up to Jemseg.

A nine-kilometre stretch of highway at Jemseg remains closed to all traffic.

Al Giberson, the general manager for MRDC, the company that maintains that stretch of highway, said crews are monitoring water levels and wind and weather forecasts.

"That assessment is ongoing and the monitoring is obviously ongoing so it's difficult to say the best-case scenario," he said.

Once the highway reopens, Giberson said, the company plans to meet with the Department of Transportation and Infrastructure to discuss "an engineered solution" to prevent further highway closures during flood season.

"If this is expected to happen regularly, or annually, then I suspect something will have to be discussed, decided upon and then executed," he said.

Jean-Marc Picard, the executive director of the Atlantic Provinces Trucking Association, said the closure has forced trucking companies to realign their operations.

"We can't forget this is a major artery that connects Atlantic Canada to central Canada to move goods," he said.

This is the second year in a row the major highway was closed because of flooding.

Picard said something needs to be done by all levels of government to prevent future closures, including elevating the road.

"At the end of the day we certainly need to rely on our roads," he said.

MacCallum again said New Brunswickers should remain vigilant and avoid the water. He said when the river returns to flood stage, it's still much higher than normal.

"These are positive signs, but the response to this flood isn't over yet," he said.

Dr. Jennifer Russell, chief medical officer of health, urged the public to avoid contact with floodwater if possible as "the waters may contain sewage from overflowing sewages stations or agricultural and industrial waste."

When cleaning and disinfecting, be sure to wear gloves, rubber boots, protective eyewear and a face mask, she said.

Water from flood-affected wells that may have been contaminated should not be used even if boiled, Russell said.

Well-water test kits will be available for people who fear their water may be contaminated by flooding, and Russell said more information on the kits will be released soon.

Residents affected by flooding can report damage by calling 1-888-298-8555 or by registering online.

Listen to Fredericton residents Dawn McKay and Philip Lee talk about how they've been coping with the 2019 New Brunswick flood.

With files from Information Morning Fredericton and Shane Fowler