Journalist Oscar Baker III describes growing up in Elsipogtog First Nation with Tiffany Peters's family and what her death has meant in the family.

I was in Fredericton when I got the news Tiffany killed herself. I knew Tiff. Not well, but I grew up with the Peters family on F street.

I was always closer to Kayla, and my heart broke for her. Kayla already had to cut down one body after a friend hanged himself in her house within the last two years and those images still haunt her.

Now her sister — and closest friend  — had taken her own life.

I got a ride down to Elsipogtog First Nation and brought Kayla a dozen roses.

We just sat on the floor and I was trying to stay strong for her. I just didn't know what to say. How do you console a friend whose world is shattered and has every right to feel life isn't fair?

I was a pallbearer at Tiffany's funeral. The gravity of suicide sits heavy in a small community. It feels like if you blink, another one is bound to happen.

She always had a happy smile, always like her mom.- Mary Ann Peters, Tiffany's mother

After the details of Tiffany's last few months were revealed, I could not imagine her family's pain.

Tiffany Anne Marie Peters grew up in Elsipogtog First Nation. She wasn't much older than I, but because she was always playing with the girls, we never developed much of a closeness. I loved her and cared about her, but Kayla and I were always closer. Her family says she was a girly girl, with a bright warm smile, a piercing laugh and a love for pink.

"She always had a happy smile, always like her mom," said Mary Ann Peters, Tiffany's mom.

I always knew Mary Ann as Freda, and throughout this story I learned a lot about their family.

Tiffany was born Sept. 30, 1989 at 7:30 a.m. in Charlottetown. Her father is Ivan Schurman Peters from Scotchforth, now known as Abegweit First Nation.

Tiffany loved the holidays and Mary Ann said she dressed up for every single one of them. Her excitement was never disguised.

As soon as she didn't have her kids in her life anymore she just spiralled downhill.- Kayla Peters, Tiffany's sister.

Which was surprising because she says, jokingly, that Tiffany was spoiled.

It started with trips to her paternal aunts and uncles where they'd spoil her. Mary Ann said the only time Tiffany wanted to cook or clean was at Christmas.

A moment not lost on Kayla who remembers a sister who liked to get her own way.

"My fondest memory was always Christmases here in this house. My sister was a bit of a sook. She cried a lot when she didn't get her way ... Christmas wasn't the same without my sister sooking because she didn't get what she wanted," said Kayla. 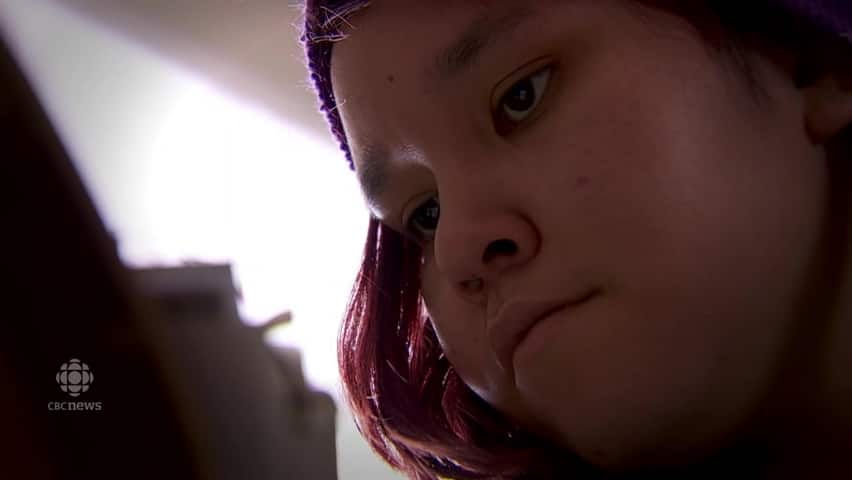 2 years agoVideo
3:07
Tiffany Peters is remembered as a loving mother and sister. The family of the young woman from Elsipogtog First Nation blame sex traffickers for her death. Warning: Strong language used. 3:07

Kayla said Tiffany was always protective of her even though they fought all the time. She said they both hated being told what to do, but were really close. Tiffany would often ask Kayla to draw her flowers.

Their mother did her best to shield them from the drug and alcohol problems in the community.

Kayla said her sister just liked to party, but things got worse when Tiffany's children weren't in her life as much.

Tiffany had two children, separated by only a few years.

Mary Ann and Kayla said Tiffany was a loving mother. She tried to emulate her own upbringing and take her kids to the park and go on nature walks.

But when she and the father broke up, Tiffany's life took a turn. The kids stayed with their dad in Nova Scotia.

"As soon as she didn't have her kids in her life anymore she just spiraled downhill. It hurt her so much, she just couldn't get sober. It just hurt her so much. She'd just get bombarded with the thoughts of her kids and it hurt too much for her," said Kayla.

After Tiffany's death, Kayla found letters Tiffany wrote to her children saying she missed them and that she loved them. She didn't get the chance to send those letters.

Kayla is still trying to pick up the pieces but the loss of her sister still weighs heavily.

"It feels like my twin sister died. It feels like the girl inside me is gone. She's the only sister I had and they took her from me. For what, for f--king money," said Kayla.

Mary Ann hopes people remember her daughter for the beautiful person she was.

"She was always helping people, always smiling and always happy to see her friends, brothers and sisters."

Oscar Baker III is from Elsipogtog First Nation, and St. Augustine, Fla. He is a freelancer based in Wabanaki.