'There will be war' over pension changes, retirees warn 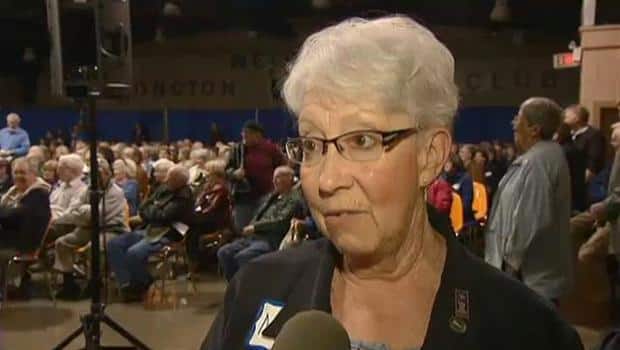 About 600 people attended the public information session about switching to the shared-risk model, including Betty Smith, a retired teacher and member of the Pension Coalition of New Brunswick.

"What they are doing is unacceptable, we will not accept it," said Smith. "There will be war in the province before this is over."

Under the provincial government’s reforms, the future pension risk would be shared by both sides.

Guaranteed cost-of-living increases will also be eliminated for pensioners and instead be dependent upon market performance.

Smith, who spent 12 years teaching and 33 years in the classroom, said she worked too hard to see her pension plan change.

"What they are doing is illegal, very illegal," she said.

"All we want is what we paid for — nothing more, nothing less. Shared-risk is great on a go-forward basis, not the way it's going now."

"We paid dearly for what we have today, and the money has been squandered by the governments. And they want to get more of our money. And we're not going to put up with it," Smith said.

Higgs 'embarrassed' about lack of consultations

The finance minister was also peppered with questions about a lack of communication and consultation on the changes.

Higgs, who is touring the province, visiting seven cities in four days, acknowledged their concerns and apologized to the crowd several times.

"I have not been involved in the process to this level til this point," he said. "I am embarrassed to be in this position at this time, where discussions were not held to the degree where they should have been."

Higgs was defensive, however, when it came to threats that his government will suffer consequences at the polls over the unpopular pension changes.

That type of threat has scared previous governments and put the province deeper and deeper into debt, he said.

"For me and for my colleagues, we didn't join this to just have this province to continue to spiral down this hole. We joined it to say can we start to recover."

Under the current plan, the risk of any market downturns is borne by the provincial government alone. Under the reforms, the risk would be shared by both sides.

The proposed model, unveiled last May by Premier David Award, also includes increased contribution levels and higher age of retirement phased in slowly over a period of time.

Government officials have previously said the pension changes would not cut the benefits in place for retirees.

But a government actuary at the Saint John meeting acknowledged cost-of-living increases will be eliminated for pensioners and instead be dependent upon market performance.

The Public Service Superannuation Act (PSSA), which covers employees who work directly for government departments and NB Power, currently has a $1 billion shortfall.

A meeting was also held in Miramichi on Thursday night.

Meetings are also scheduled for: