The acrylic answer: Businesses prepare to reopen with help from a maze of plastic

If you walked into the Vibrant Salon and Spa during normal times you’d be greeted by one of more than 20 staff members before being escorted to your styling chair while passing by multiple customers getting haircuts, shampoos, manicures and pedicures.

Different businesses are tackling the physical distancing problem with Plexiglas

If you walked into the Vibrant Salon and Spa two months ago, you'd be greeted by one of more than 20 staff members who would escort you to your styling chair past multiple customers getting haircuts, shampoos, manicures and pedicures.

But those days are gone.

The owners celebrated the one-year anniversary of opening their Fredericton business last month with their doors locked amid the COVID-19 outbreak.

And when they do reopen, it won't be business as usual.

That's evident by the mazes of Plexiglas now mixed in with the salon's clean esthetic design.

"We've put a bunch of Plexiglas barriers up throughout the salon and spa," said Kristen Clark, co-owner of Vibrant Salon and Spa.

At the manicure tables, similar barriers stand tall with small openings near their base where clients can slip their hands through to have their nails done.

And at the front desk, another shield nearly reaches the ceiling ensuring that nobody will be "speaking moistly" on staff or customers.

The acrylic material is now nearly standard at every convenience store or retail business still open.

And for Clark, it's the first line of defence against the coronavirus when the shop gets the green light to reopen.

"We've also brought in a lot of hand sanitizer," said Clark. "We have gallons of it stored."

Clark hopes the upgrades will meet the regulations when the provincial government gives the go-ahead for barbershops and salons to reopen. 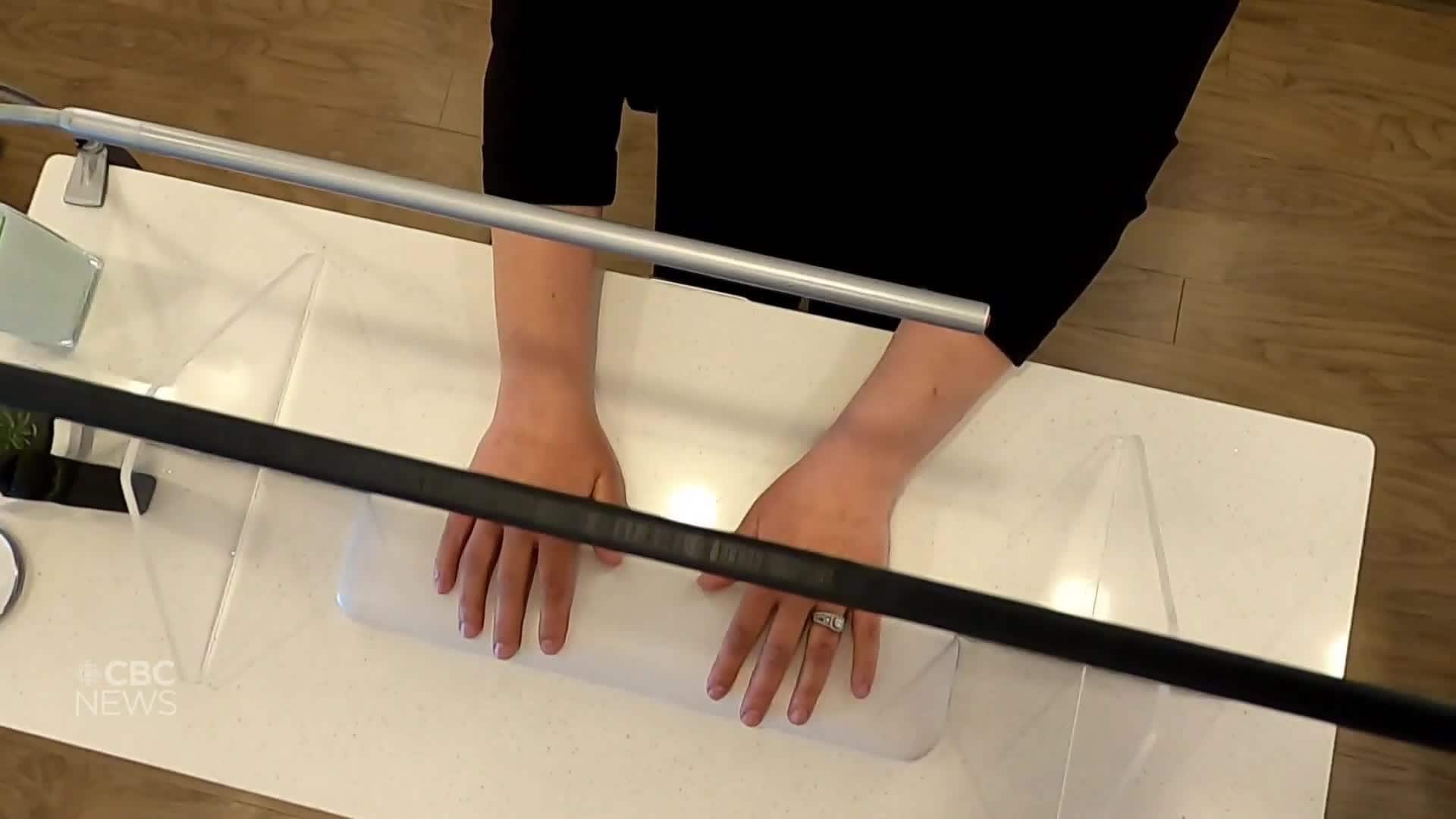 7 months agoVideo
2:58
This is how some Fredericton businesses will look after Plexiglas is added to keep clients and workers safe during pandemic. 2:58

Premier Blaine Higgs stated earlier this month that while he expects business will start to open their doors again, they will only be permitted to do so as long as they maintain strict physical-distancing measures.

Clark said there haven't been any specific regulations handed down from the government yet to base her retrofit on, so this is her best guess. Masks, gloves and common sense will make up the rest of her game plan for serving clients again.

"We're extremely confident that this should work," said Clark.

Clark said she owes part of her confidence to another local company.

Stortec in Hanwell normally designs and builds store interiors for convenience stores and retail shops across the Maritimes.

But when the pandemic hit, the business hit a wall.

"A lot of our projects came up to a dead stop," said Ed Cochrane, the owner of Stortec.

But then, Cochrane said, NB Liquor contracted his company to install acrylic barriers at their stores across the province.

Then everybody wanted them.

"Probably close to 300 or 400 units have gone all over," said Cochrane, who has taken to calling them either COVID guards or sneeze guards.

In the last few weeks, Stortec has installed the barriers in pharmacies, convenience stores and retail businesses.

Clark's business was the first salon, but Cochrane expects it won't be the last.

As more stores and services get ready to reopen, demand for the acrylic sheets is increasing, but he said he and his team take their skills to heart.

"You hang a piece of P​​​​​​lexiglas up and [there's] a lady behind the counter who is working hard, you know, doing her best to keep her family fed," said Cochrane. "But she's afraid. Scared to death. And at the end, when they go like this and say, 'Oh, thank you,' it made me feel so good."

While Stortec's market normally spans the Atlantic provinces, the company has been hampered by provincial border closures.

Instead, it has been working to build COVID guard kits it can ship out and store owners can install themselves. Cochrane said one client in Cape Breton recently installed a number of the barriers without needing a crew from Stortec to help.

"They have five pharmacies," Cochrane said. "We sent them 37 different pieces of acrylic to provide safety at the front cash, at the dispensary, at the consultation, and if there happens to be a medical clinic attached there will be something there as well.

"The guy sent us back a bunch of photographs and said, 'This is fantastic, every piece fit.'"

Cochrane said the guards only account a small fraction of the money his company would normally be making, but he said the Stortec feels an obligation to help.

"It's a good time for us all to be kind and thoughtful of the people around us," he said. "And help make their life better is some little way."