Photographer Thaddeus Holownia and poet Harry Thurston collaborate on a book about the 7,500 birds that died after flying toward the burning natural gas at the flare stack in east Saint John in September 2013.

Thaddeus Holownia, Harry Thurston collaborate on book about birds that perished in 2013 incident

The fate of thousands of songbirds that died near the Canaport LNG flare stack in east Saint John in September 2013 has been memorialized in a book by two Maritime artists.

Icarus, Falling of Birds pairs the photography of Thaddeus Holownia with the poetry of Harry Thurston, both of whom were deeply affected when they heard that flocks of migratory songbirds, including Canada warblers listed under the Species at Risk Act, had been fatally lured by the gas terminal's 10-metre flame.

"It symbolizes man's hubris," said Thurston, who has written extensively about the environment and natural history for magazines such as National Geographic and Audubon.

"This tragic incident was another example of us carrying on the way we do without due consideration to the effects on other creatures and the environment."

Thurston and Holownia, who had collaborated before, both agreed they should do something about this die-off, but they had to wait at least two years to see the damage for themselves.

That's because the bags of carcasses that had been collected from the site had to be secured as potential evidence at trial. 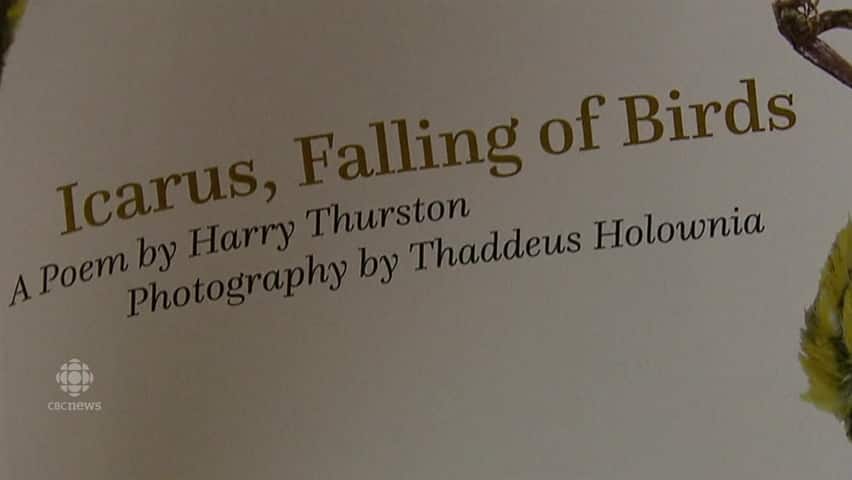 1 year ago
3:03
These Maritime artists were so affected by the deaths of 7,000 songbirds at Canaport LNG in Saint John that they commemorated the tragedy through art. 3:03

The legal case came to an end in November 2015, when Canaport LNG pleaded guilty to charges under the Migratory Birds Convention Act and the Species at Risk Act, resulting in a fine of $750,000.

'It was somewhat traumatic'

With the matter resolved in court, Don McAlpine, head of natural history at the New Brunswick Museum in Saint John, was able to give the artists access to the freezers in the museum basement on Douglas Avenue, so they could see the collection of burned and damaged bodies.

Thurston, who graduated with a biology degree from Acadia University, said the environment felt both familiar and shocking.

"It was somewhat traumatic to be face to face with the tragic consequences of this incident," he said.

In the book, Thurston enumerates the 26 species that died that day, including American redstarts, blue-headed vireos, rose-breasted grosbeaks and Swainson's thrush.

He also describes their epic journeys from the Andes in South America and the mangroves of the Caribbean, up the Mississippi, over the Appalachians, to the Atlantic, "to claim their summer homes."

He also describes how the birds were deformed by the heat.

The inside and the outside, one wreckage."

While Thurston was taking notes in the bowels of the building with its "familiar atmosphere of formaldehyde," Holownia was taking hundreds of photographs.

"It was really heart-breaking and a tough place to be," said Holownia, who retired last year from teaching in the fine arts department at Mount Allison University.

"Some of them looked like they were asleep and some of them were crispy."

All the images of the birds appear in the book, positioned head down, as if they are dropping out of the sky and falling down through the page.

Holownia also made larger canvases for an exhibition in Halifax, with one bird per frame, bordered in black as a nod to European death notices, he said. 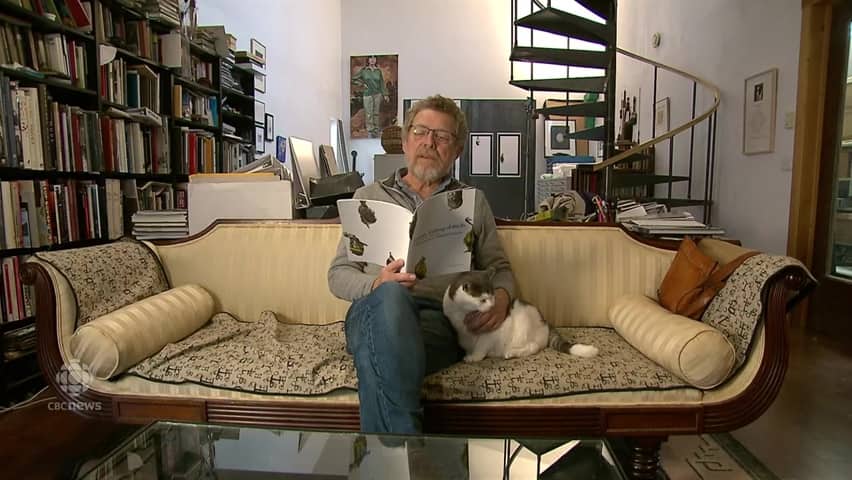 1 year ago
2:49
Poet Harry Thurston thinks the deaths of thousands of songbirds at Canaport LNG was an example of humans being inconsiderate toward the environment and other creatures. 2:49

They went on display at his 40-year retrospective at the Art Gallery of Nova Scotia in the spring of 2017.

He also made a scroll about five metres tall and more than 75 centimetres wide, showing 200 birds, all head down and all raining downward.

"That was a pretty massive work," said Holownia. "I felt I should represent the scale of the whole thing."

The two artists say they hope their collaboration serves as a reminder of what was lost six years ago. They want the story to travel beyond New Brunswick.

"Part of this exercise is to memorialize these beautiful beings," said Thurston.

"I mean, one of the ironies of Icarus, of course, is that humans aspire to be birds.

"We aspire to fly and there's that understanding that there's something very extraordinary in the nature of these beings."

Thurston says it was a bitter experience to reach down into the freezers and pull the damaged birds out.

Icarus, Falling of Birds is published by Anchorage Press.