The Alkarfan family of Syrian refugees arrived back in New Brunswick on Wednesday night after a brief attempt at settling in Vancouver. 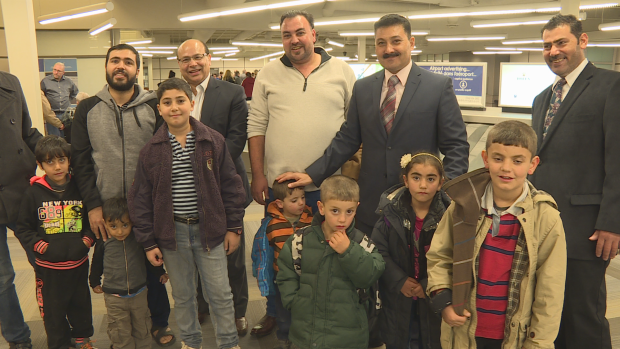 4 years agoVideo
0:39
A Syrian family arrived at the Greater Moncton International Airport on Wednesday night and were immediately greeted by friends and others ready to help them integrate into the city. 0:39

A Syrian family arrived at the Greater Moncton International Airport on Wednesday night and were immediately greeted by friends and others ready to help them integrate into the city.

This was a common sight a year ago when the first wave of Syrian refugees began landing in New Brunswick.

But this time, the Alkarfan family is returning to Moncton after leaving the province in hopes of a new start in Vancouver.

Mike Timani, the chairman of the New Brunswick Multicultural Council, was among the group who welcomed the family home on Wednesday night.

"They [say] this is a much better place and a much safer place," said Timani as he translated for the family.

He said the expensive real estate market in British Columbia is something that they were not expecting when they left New Brunswick.

"People do think it's greener on the other side, but the fact is that it's not. New Brunswick is a great place to live."

New Brunswick brought in an estimated 1,500 Syrian refugees and that influx of new residents was a major factor in the province setting a string of population increase records earlier this year.

But the province has also had to cope with the challenge of settling Syrians and keeping them in the province.

In September, Janet Hunt, who volunteered with the resettlement effort in Saint John, said there had been at least five Syrian families that have left that city for other Canadian destinations so they could find work or to reunite with friends.

On Wednesday night, Timani said this one family realized that living in New Brunswick definitely had its advantages.

Timani said the family was depressed shortly after relocating to the west coast, so much so they sought help from those they knew back in New Brunswick to help facilitate their return.

After searching for funds Timani himself paid for the family's return flight.

"A big difference they found was in services and settlement agencies, language training for example," said Timani.

"We have taken care of 1,500 Syrians. And we looked after all of them in terms of language training and other services. The settlement agencies have done a great job."

The family will move into a new Moncton home and say their priorities will be to master English and find employment in the months to come.

"They are very much excited to be back and look forward to being permanent Maritimers," Timani said.