The York Regional Police have arrested two suspects in connection with the theft of a diamond that is worth an estimated $10,000 in Saint John earlier in October.

Grigori Zaharov and Natalia Feldman of Vaughan, Ont., to be transported to Saint John to face charges 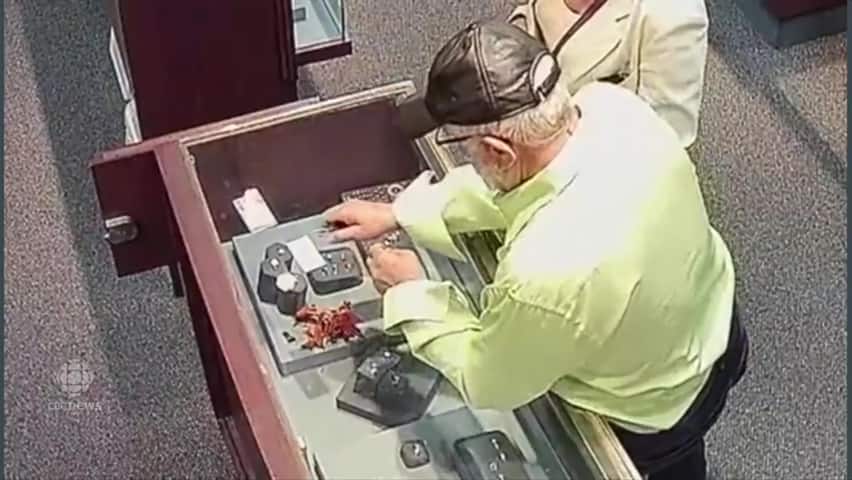 4 years ago
1:38
A couple suspected of bilking jewelery stores of high-priced gems is now in police custody. 1:38

The York Regional Police in Ontario have arrested two suspects in connection with the theft of a diamond that is worth an estimated $10,000 in Saint John earlier in October.

Sgt. Charles Breen from the Saint John Police Force said they will be charged with theft over $5,000.

Grigori Zaharov, 70, and Natalia Feldman, 44, from Vaughan, Ont. were arrested at their residence in Vaughan. The two were arrested on Wednesday night after a Canada-wide warrant for their arrest was issued.

In Saint John, footage shows a man swap a gem he was being shown for a cubic zirconia while the clerk was distracted at W. Smith & Co. Fine Jewellers on Oct. 7.

Store owner Wayne Smith was pleased to hear two suspects had been arrested.

"The mood is ecstatic," said Smith. "I've been getting calls all morning that 'Congratulations, it was your video that got these crooks brought to justice.'"

Smith said that may be premature, but he was pleased with his employee Rhonda Dorie. Dorie was the one who realized the diamond she was showing the two had been switched with a duplicate.

Dorie has worked at the jewellery store since 1992 and has taken the theft personally.

"I can't tell you how upset I've been that somebody could walk into our store, or any store and be so mean hearted as to do this" said Dorie.

Zaharov and Feldman are suspects in other theft investigations.

Charlottetown police were also looking for a man and a woman they say robbed a jewelry store there of $20,000 worth of stones, again using a swap of cubic zirconia.

"It appears they were traveling in other areas, so we'll be releasing to other agencies across Canada to see if anybody has any outstanding files that they might want to speak to them about," said Sgt. Breen.

The two are being held in the town of Newmarket awaiting transfer to Saint John.

With files from Matthew Bingley