Anthony Peter-Paul expected his first season as a lobster fisherman to be tough and profitable, but it turned into a situation where, he says, he "felt helpless."

First Nations fishermen accused of trying to sell undersize lobster, but they say catch was planted by others 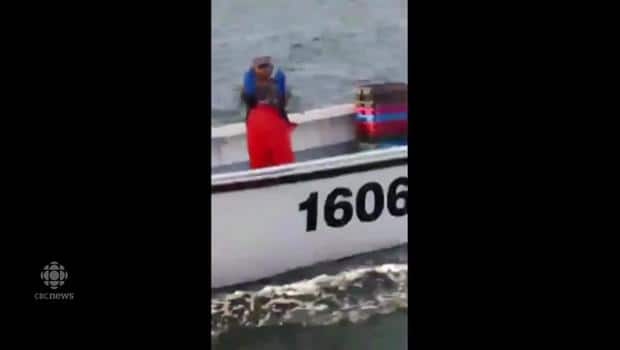 Anthony Peter-Paul expected his first season as a lobster fisherman to be tough and profitable, but it turned into a situation where, he says, he "felt helpless."

The St. Thomas University student, and Pabineau First Nation man, spent the 2015 season fishing lobster in the Bay of Chaleur with a first-time licence-holder, also from Pabineau.

"It started off with a fishermen's meeting which they have every year at Stonehaven," said Peter-Paul

"Our chief, [Anthony's father] David Peter-Paul, brought up the prospect of a Pabineau fishing licence coming to that wharf, and a lot of the fishermen didn't like that."

The licence, held by Nathaniel Hache, is the fourth First Nations licence in Stonehaven.

Peter-Paul says the non-native fishermen at the wharf were immediately hostile towards the new crew.

"There was a lot of negative feedback during that meeting and a couple of threats, as in, 'Wait until you get on the water,'" he said.

According to Peter-Paul, who is now attending university classes in Fredericton, tensions rose as the season progressed.

Accusations from both sides

On July 1, Peter-Paul says Hache was informed by the boat's captain, Jason Hebert, that a mob of angry fishermen had accosted him, accusing the crew of selling undersize lobster.

"They were saying that when our lobster came in after it passed through the hands of the buyers, that [the Department of Fisheries and Oceans] came along and measured randomly the lobsters," said Peter-Paul.

"Their perspective is that we weren't measuring our lobsters."

"It's his first season fishing that licence and he doesn't want any illegal lobster on the boat."

The Pabineau fishermen believe the undersized lobster were planted.

"We're thinking it's a conspiracy between the fishermen that do not want us there to rid us of the wharf by planting this lobster and maybe paying the offloaders to go along with it. Maybe paying the buyers," said Peter-Paul.

According to the Department of Fisheries and Oceans, the incident is still under investigation. Chief Peter-Paul has been unavailable for comment on the issue.

Confrontation on the water

After the accusations of undersize lobster fishing at the wharf, the boat's captain steered away from Stonehaven and docked on Miscou Island.

Peter-Paul, Hebert, and Hache sailed back towards Stonehaven two days later, on July 3, to retrieve the full lobster traps they had left behind.

The crew contacted the Department of Fisheries and Oceans and local RCMP to arrange for an escort, but Peter-Paul says their boat was not met by any officials.

"As soon as the fishermen at Stonehaven saw us, they bombarded us with their boats. They circled us, they tied up to us, they almost crashed into us," he said.

There was a lot of racial remarks and stuff like that. It was a really messy scene and it seemed like it was about to get physical.- Anthony Peter-Paul

"They were yelling and screaming, threatening us."

Anthony Peter-Paul remembers eight boats circling their lobster vessel, several of which tied on to their boat.

Eventually, the crew from Pabineau retreated back towards Miscou Island and met up with an escort of DFO and RCMP members.

"There was a lot of racial remarks and stuff like that. It was a really messy scene and it seemed like it was about to get physical," said Peter-Paul.

"We told them we were going to leave and they let us leave."

As the vessel made its way back along the coastline, Peter-Paul and his colleagues attempted to empty their traps and sell the lobster they had recovered.

"We had to drop them back in the water," said Peter-Paul.

"So there was a big loss there."

Bathurst RCMP say two men were arrested in connection with the incident on July 3.

Pettigrew has been fishing from Stonehaven since 2006. He says he was trying to protect and preserve the lobster fishery on July 3.

"We acted. Got a little hot under the collar, especially myself," he said.

"There were charges laid against me for cutting a rope off when they grabbed it. Yes I did. Do I feel bad for doing this? Yes."

Pettigrew also said he rejects Peter-Paul's theory that the Pabineau fishermen were framed or that the confrontation was racially-motivated.