The last piece of stained glass to complete the window restoration at Memorial Hall at the University of New Brunswick was installed Thursday — the final touch on a painstaking process to preserve the near century-old works of art.

With all hands on deck, Ned Bowes, the artist in residence at the university, said the project at the Fredericton campus took 13 months to complete. He started working on restoring the stained glass pieces last May.

"It's very tedious and it's one piece at a time," said Bowes.

The six windows were in need of major restoration since their initial installation close to 100 years ago. In 2016, the condition of the stained glass windows started raising concerns. 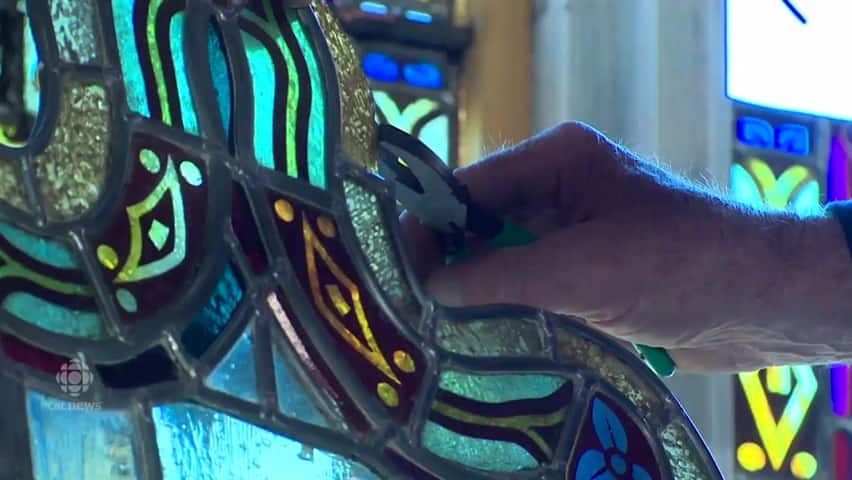 2 years ago
0:48
The six windows were in need of major restoration since their initial installation close to 100 years ago. 0:48

Over time, some of the windows started buckling, causing chips, cracked glass and bending.

Now, more than two years later, the windows are in pristine condition. The work done by Bowes should keep the windows intact for another 150 to 200 years.

Bowes estimated he spent 250 to 300 hours on each window he restored in the hall.

The restoration process begins by removing the old lead from the stained glass piece. Then he solders the pieces together, re-cements the panels and, only then, can he put the window back where it belongs.

Bowes said he was anxious about finalizing the project. "It has to be the same size. There's no discrepancy. If there is, you're going to force it and it's going to break."

The windows are more than beautiful mosaics of colour; they're stories. The pieces are an homage to University of New Brunswick students and professors who lost their lives fighting in the First World War.

One of the seven windows honours George Fenwick who lost his life in the Battle of Passchendaele. Shards of glass from a French cathedral were incorporated in the making of the piece. Another honours the sixth and last Earl of Ashburhman.

The master and the apprentice

Bowes started working with stained glass in 1974. Living in in Calgary at the time, Bowes worked alongside Englishman Robert Hunt and eventually was hired doing restoration work.

The stained glass artist also worked alongside French artist Maurice Loriaux, who had worked with renowned Russian-French artist Marc Chagall. Bowes got the opportunity after entering a contest to study along Loriaux for three weeks in New Mexico. He was the only Canadian selected for the project.

Luckily, Bowes has an apprentice as enthused about stained glass as he is. Trevor Wells met Bowes at the Boyce Farmers Market more than fifteen years ago. He was an apprentice electrician at the time.

In 2010, Wells was doing electrical work around Bowes home.

"I asked Ned, 'What's this stained glass stuff about?'" said Wells. "He set me up with a glass cutter and some glass, and the rest has been history ever since."

Alyssa Gould is a reporter with CBC New Brunswick based in Fredericton.