The Trans-Canada Highway between Fredericton and Moncton is open again, two weeks after the floods that devastated parts of New Brunswick began.

On Friday, water levels in Fredericton dropped below flood stage for the first time in about two weeks

The Trans-Canada Highway between Fredericton and Moncton is open again, two weeks into the record-level flooding that devastated parts of New Brunswick.

The reopening of the highway comes as the federal government confirmed it will provide support, including help from the military, to New Brunswick's flood relief effort.

On Friday, water levels in Fredericton dropped below flood stage for the first time in about two weeks.

"Things are looking up," said Greg MacCallum of the provincial Emergency Measures Organization.

"Roads are opening as we speak. Things are starting to have the appearance of some return to normalcy."

To give you a sense of the flood's impact, NASA captured satellite images, two years apart, of the St. John River near Fredericton.

The provincial government has also launched a new webpage with flood recovery and cleanup information. The page also informs the public how to support the flood recovery by volunteering or donations.

The City of Saint John has a call out for volunteers, encouraging people to register at Harbour Station on Saturday and Sunday at 9 a.m., 12 p.m. and 3 p.m.

Saint Johners! Our community &amp; your neighbours need support to get back into their homes. Can you help move debris this weekend? Volunteer registration/deployment <a href="https://twitter.com/harbourstation?ref_src=twsrc%5Etfw">@harbourstation</a> Sat &amp; Sun. Reg time 9am, 12pm &amp; 3pm. You will be shuttled to sites, provided with PPE &amp; refreshments. <a href="https://t.co/yBHmud9I2J">pic.twitter.com/yBHmud9I2J</a>

"We're in transition," he said. "There are still roads that need to be guarded and barricaded until they're safe. Lots of inspections have to take place. Water is still high some places."

The number of people registered with the Red Cross continues to grow, climbing to 1,620 on Friday.

Water levels along the river were at 6.46 metres above sea level early Friday morning in the Fredericton area, just below the flood level, according to real-time data provided by the federal government.

Near Saint John, water levels were at about 4.8 metres Friday morning, down from 5.1 metres on Thursday. Flood stage in that area is 4.2 metres.

The latest five-day River Watch forecast suggests water levels near Fredericton and Saint John will drop a metre below flood level by Monday.

However, EMO spokesman Geoffrey Downey said water levels in some areas south of Fredericton could still be above flood level by Monday, including in Jemseg, Grand Lake, and Sheffield/Lakeville Corner, according to the province's latest Riverwatch forecast. 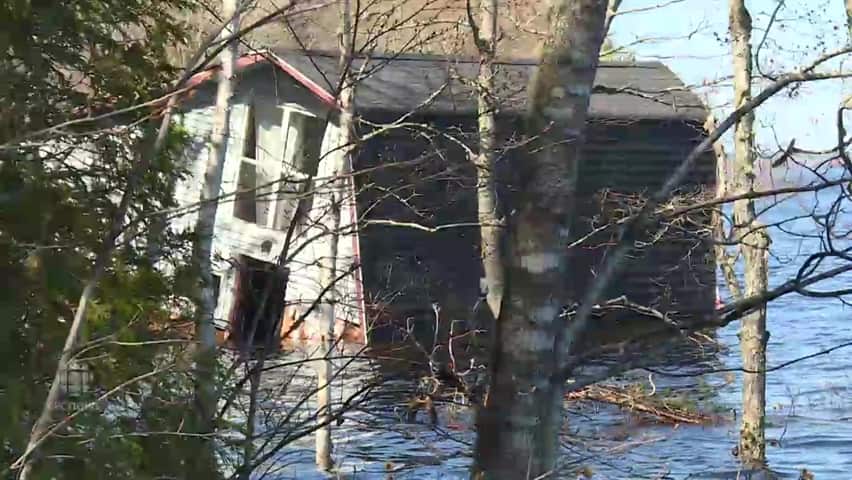 3 years agoVideo
1:07
Aaron Moore's camp floated from one side of Grand Lake to other in the floodwaters. 1:07

In Grand Lake and Sheffield, water levels were still close to a metre above flood stage Friday morning, and they're projected to remain above flood level until early next week.

The situation in Jemseg is expected to take longer to clear up. On Friday, the water hovered about 1.5 metres over the 4.3-metre flood level. By next Tuesday, the level is projected to be 4.8 metres.

Road access has been restored to the Village of Chipman, which had been cut off from the rest of the province earlier this week.

Mayor Carson Atkinson said Friday that Route 10, which connects the village to Fredericton and the Trans-Canada, has reopened as floodwaters retreat. Route 123 to Doaktown remains closed, however.

"We're kind of back to normal," Atkinson said. "The water has dropped by a couple of feet."

The mayor praised efforts by the local Emergency Measures Organization as well as corporate partners in the area.

He said J.D. Irving, which runs the Grand Lake Timber mill, flew in a pharmacist by helicopter to ensure no resident went without their prescription, while CN provided a 32-passenger bus to deliver food and other supplies to the stranded community.

As the cleanup effort begins, Atkinson said there is lots of debris, sandbags and contaminated material to dispose of.

"We've got a lot of issues to deal with, but given what it could have been, we came through fairly well," he said.

The Village of Gagetown was about six to 12 inches away from being cut off from the province, according to Mayor Mike Blaney. The swollen St. John River flooded homes and many businesses at the worst time of year, he said.

Blaney said as the weather warms, more people begin to come to Gagetown and patronize the businesses. Instead of welcoming customers, business owners will now be cleaning the mess this month.

"It's a quite a blow that they have to deal with," he said Friday.

The village is also concerned with the impact on its sewage lagoon. Blaney said berms surrounding the lagoon were built to withstand the levels of 1973, but new records were set this year. He said they will be assessing the damage.

Blaney also cautioned residents about the condition of well water. Homes and businesses in Gagetown rely on well water, and public health officials have warned flooded wells could be contaminated.

"It's exceedingly important that they're able to access the necessary service to have it tested and ensure, as they go forward, they're well aware when it's safe to make use of that," Blaney said.

Both Blaney and Atkinson were pleased with their community's co-operation and resilience during the flood.

"I can't say enough about the individuals during these types of events that step up and reach out to their neighbours and to people that may not even know very well," Blaney said.

About 60 soldiers will provide flood relief support to the New Brunswick government in response to a request from Premier Brian Gallant, the Canadian Armed Forces announced on Friday.

Army engineers from the 5th Canadian Division Support Base Gagetown in Oromocto will assess the damage to roads and bridges from the unprecedented flooding in the southern part of the province, and prioritize next steps.

The soldiers will advise on mitigation measures and assist provincial authorities in planning and co-ordinating relief efforts.

EMO had already requested help from the federal government, and it received boats from the Department of Fisheries and Oceans and the Canadian Coast Guard.

The Trans-Canada Highway between Fredericton and Moncton, used by an average of 12,000 vehicles daily, reopened just before noon Friday after being closed for a week because of flooding, the Department of Transportation said.

Traffic will be reduced to one lane in each direction, with speed limits reduced between kilometre markers 330 and 339.

Debris and driftwood were being cleared from the highway on Thursday, while preliminary inspections have revealed erosion at the side of the highway, said Norman Clouston, general manager of the Maritime Road Development Corp.

But so far the flooding doesn't seem to have undermined the highway itself.

Dozens of roads still remain closed throughout the province.

Two weeks after the high water spilled into some parts of Fredericton and created traffic chaos, all streets have now been reopened in the city as cleanup efforts get underway.

Wayne Tallon, Fredericton's director of EMO and safety services, said some areas of the city are still underwater along Lincoln Road and on the north side, but the city is in the "full blown" process of recovering.

The city is asking residents to pull all of their debris and flood-related waste curbside, including broken appliances, drywall, carpet and clothes. The special pickup service will run until May 28.