New Brunswick Premier Brian Gallant announced earlier in the day that the Canadian Armed Forces will conduct a reconnaissance mission to see what, if any, role it can play during the flood recovery in the province.

The mission comes at the province's request as the focus of residents and emergency officials shifts to the cleanup effort, now that water levels are receding in the lower basin of the St. John River.

Gallant said Thursday afternoon the mission will determine what kind of role the military could play and that the province should receive an answer in the next 24 hours.

"We certainly hope that the answer will be yes, because we would like to see as much support as possible to try to get the cleanup done as quickly as possible," the premier said during a news conference in Fredericton.

Goodale tweeted shortly after 7 p.m. that Ottawa will join the recovery effort.

Have responded YES this afternoon to Request for Assistance from NB Minister Landry - for federal help (including Canadian Armed Forces) in response to flood.

The minister could not be immediately reached for comment.

Water levels along the river continued to drop Thursday, though most southern riverside communities remain above flood stage and many homes are still under water.

"The priority will be for us to keep them safe," Gallant said. "But there are people that are getting into the recovery stage, and we want to do everything we can to support them in getting their lives back to normal as quickly as possible.

"That means all hands on deck."

The province has received pressure from some residents as well as opposition members of the legislature to call in the military to assist the relief effort. Both provincial and Emergency Measures Organization officials have said a continuous conversation with the military about available resources has occurred during the flood.

According to Gallant, as of Saturday, Brig.-Gen. Derek Macaulay, commander at Base Gagetown, decided there were no tasks appropriate to delegate to the Armed Forces. On Tuesday, the EMO said no more assistance is needed from the federal government.

EMO has already requested help from the federal government, and it received boats from the Department of Fisheries and Oceans and the Canadian Coast Guard.

By Thursday afternoon, the Red Cross has registered 1,516 displaced New Brunswickers from 655 homes.

It's all on hands on deck as well at the Department of Transportation and Infrastructure.

Operations director Ahmed Dassouki said technical teams are deployed to restore and recertify affected roads and bridges — more than 150 have been hit by flooding.

"We will be using all available staff and resources for the restoration effort, including bringing in casual workers earlier than usual or required," he said. "We're also ready to move staff from divisions that weren't impacted by the flood to areas that have been hard hit."

The department is also reaching out for assistance from private contractors and Public Works Canada, if needed.

As the river drops, so does the number of closed roads. For a list of affected roads, click here.

The Trans-Canada Highway between Fredericton and Moncton remains closed. But Norman Clouston, the general manager of the Maritime Road Development Corp., said the highway could reopen Friday afternoon.

Clouston said debris and driftwood are being cleared from the highway on Thursday.

When the highway reopens, the official said, one lane will open in each direction and the speed limit will be about 70 km/h.

He said preliminary inspections have revealed erosion at the side of the highway, but so far it doesn't seem to have undermined the highway itself.

Water levels in the lower basin will continue to retreat in the coming days, as the worst of what Gallant called "the largest, most impactful flood ever recorded in our province" has passed.

The river at Fredericton hovered around seven metres Thursday, and it should return to below flood stage, 6.5 metres, by Saturday, according to the province's River Watch outlook. 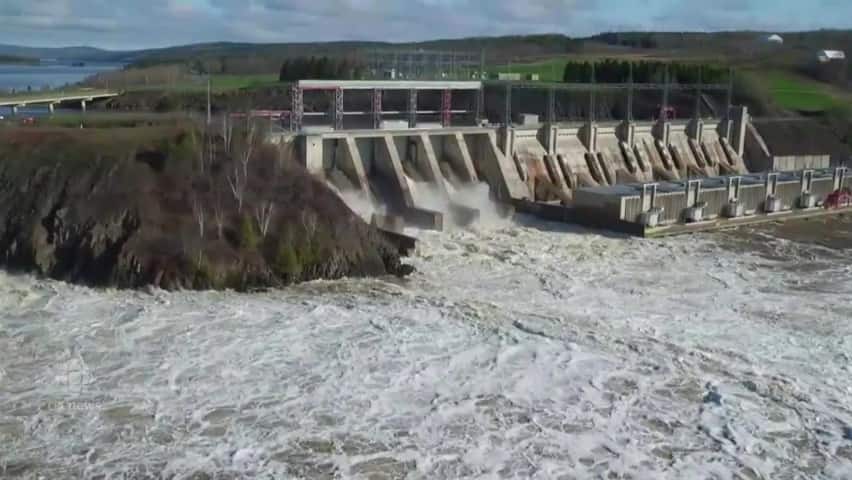 A look at Fredericton floodwaters from the sky

The water level in Saint John still remains above the previous high of 5.4 metres in 1973, but it will gradually fall to below flood stage (4.2 metres) by Sunday. Maugerville and Oak Point should also drop below flood stage on the weekend.

The communities of Grand Lake, Jemseg and Sheffield will see water levels slowly decline, but the forecast suggests it will be next week before the levels fall below flood stage.

Despite the continuing decline, Geoffrey Downey, a spokesperson for the provincial EMO, said water levels are still "well above" flood stage in some communities.

He warned people against rushing to return home. If they do go home, they should approach their properties with caution.

"We understand that some people have been out for 10, 11, 12 days and they're frustrated, and they want to see what the immediate future holds in terms of starting the recovery process," Downey said. "But rushing back into a potentially dangerous situation doesn't help anyone in the end.

"Who knows what's happened in their absence?"

The kits are filled with useful items such as a mop, broom, squeegee, scrub brush, sponges, work gloves and latex gloves, masks, garbage bags and a bleach-based all-purpose cleaner.

They can be picked up at the Red Cross offices at Loch Lomond Place at 12 MacDonald St. in Saint John, and 318 Maple St. in Fredericton, from 8:30 a.m. to 7 p.m. daily, including on the weekend. There is a limit of one kit per household.

The province is cautioning residents against emptying sandbags near watercourses or wetlands, saying sandbags should be disposed through debris collection or a regional landfill.

In Fredericton, the city's park and ride shuttle services will continue until Friday, though commutes should be a little easier this morning as all of the Westmorland Street Bridge ramps are back open.

Many roads in the area are still closed, however, including Lincoln Road at the city limits (or Baker Brook), Riverside Drive at Route 8, and Morrell Park.

In the Saint John area, four public parks are closed due to possible contamination due to flooding: Robertson Square, Tucker Park, and Lower Shamrock parks in the north end, and Dominion Park on the west side.

As cleanup efforts begin, health officials are warning property owners to watch out for mould and other contaminants.

Dr. Na-Koshie Lamptey, the regional medical officer of health, said people should wear long-sleeved shirts and pants as well as rubber gloves while cleaning up their homes and businesses, because floodwaters may have contaminated their property.

Masks should be worn as well by people who spot any mould spores, she said.

"It can start to grow fairly quickly in a matter of days," she said.

Symptoms of exposure to mould include irritation of the mouth, nose and eyes, Lamptey said, and respiratory problems could worsen.

If people are on a private water system that has been flooded, they should be boiling their water or using an alternative source for drinking and cooking.

The Emergency Measures Organization and Department of Health are also telling residents not to eat fiddleheads that were picked from flooded riverbanks, since they may be contaminated.

"There's just no way of knowing if there's a chemical that may make you sick," Lamptey said.