Touch at your own risk, snapping turtles on the move in N.B.

New Brunswick's largest reptiles are on the move around the province this week, and experts are urging residents to give them space.

Snapping turtles are seeking warm, sandy roadsides to lay eggs - but don't try to help them cross the road 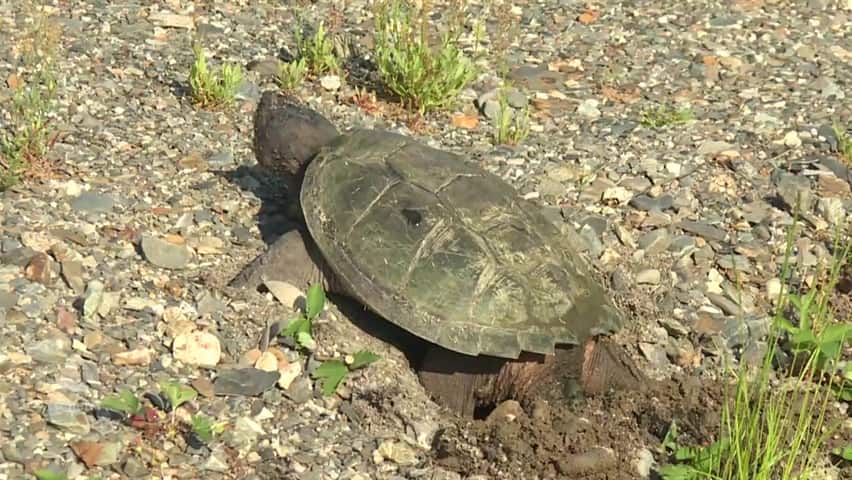 4 years agoVideo
1:02
CBC's Shane Fowler caught this snapping turtle in the midst of laying her eggs. We've sped up the half hour of effort into one minute. 1:02

New Brunswick's largest reptiles are on the move around the province this week, and experts are urging residents to give them a lot of space.

Weighing as much as 34 kilograms, or 75 pounds, common snapping turtles have heavy, spiked tails and massive armoured shells — and can present challenges to drivers on provincial roadways.

Although they keep a low profile most of the year, this next week will see the large reptiles abandon their normal wetlands and streams in search of dry, elevated areas to lay their eggs.

Typically, the turtles are drawn to the sandy shoulders along the sides of highways and roads, a perfect nest for the eggs' roughly three-month-long incubation period.

"They love this sand that the Department of Transport puts down," said David Olive, a citizen scientist who has been tracking snapping turtles in Fredericton Junction for 18 years. "They want to get above the flood line and the river to lay their eggs and they also lay along bridges and railways."

Over the years, Olive has kept tabs on several individual snapping turtles in his community. Within a few days, he can even predict which turtle will show up to lay eggs.

"There's one here that comes here, every year around the 17th of June," said Olive, who has named the turtle, Queen Diane. "They tend to lay their eggs in the same place."

However, laying eggs in the warm sands along roadways can lead to many of their deaths.

"Cars are their biggest enemies," said Doug van Hemessen of the Nature Conservancy of Canada. "And it takes them a long time to reach maturity, where they can lay eggs, so when one gets killed on the road, it's a big loss."

Although conservationists recommend helping smaller native cousins, like the wood turtle or painted turtle, by picking them up and depositing them on the side they were pointed toward, snapping turtles are different.

"They have a very nasty bite, and a very strong bite," said van Hemessen. "And you don't want to get fingers or even bigger bones in the way because they can do a lot of damage."

Snapping turtles have been known to amputate fingers, striking well-meaning humans with a dangerously sharp beak at the end of a darting neck that can be as long as their entire body.

"So perhaps it's safer just to keep watch as they cross roads," said van Hemessen. "And make traffic aware."

Pushing or shoving them across roads with your feet or sticks also isn't advisable, according to van Hemessen.

"Their shells aren't as thick underneath, and with the rough pavement that can do a lot of damage," he said.