Artist underfoot: the weird life of a world-renowned sidewalk 'Chalkmaster' 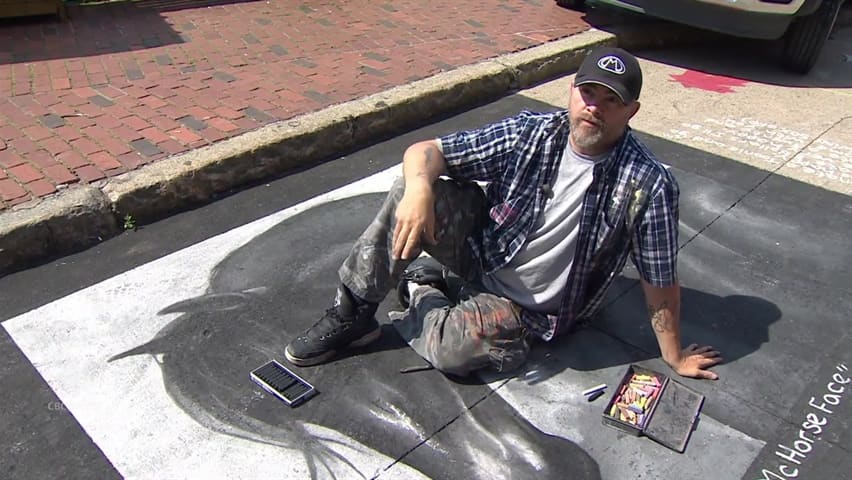 Sidewalk artist makes art entertainment by taking you into the process

When Dave Johnston was in Grade 10, he said, he got 52 percent in art class.

"That's when I realized I had to create my own path as an artist," he said. "I don't know if I would work out in a gallery setting — I like to do my own thing."

The unusual approach to art has paid off.

For the past 25 years, Dave Johnston, 47, has become better known as Chalkmaster Dave, and he's decorated sidewalks from Singapore to Saint John with crazy, detailed chalk pastel murals.

His subjects range from animals to reproductions of 17th-century oil paintings by the Dutch Masters to optical illusions.

This year, he was invited by the Hardman Group in Saint John to complete an artist residency as part of Canada 150 celebrations.

Johnston will be working for donations and selling original works on canvas on the Market Square boardwalk until the end of the Buskers on the Bay festival on July 16.

A mural can take up to six hours, and as many as three layers of chalk pastels to complete. Between each layer, he sprays the surface of the work with hair spray, which acts as a fixative and makes the work harder to smudge.

The job is surprisingly demanding physically, he said.

"Here," he said, "there is a slight incline, so I have to have my body constantly braced. Because of this, I have arthritis in the bottom of my spine. You're rubbing your fingers and they get scraped and bloody. People say things like, 'Oh, you've got an easy job.' But it's hard work."

But rain is the biggest occupational hazard.

"In Canada, there's maybe 30 percent of the year you can do this," he said.

Nor can he work his magic on any old sidewalk.

"If you're on Yonge and Dundas in Toronto, there are a million people a week that walk there, which smoothes it out," he said. "Fresh concrete isn't always good, either. It's like shards of glass on your hands."

He prefers the rougher concrete on the Market Square boardwalk, which takes "twice as long to work on," he said, "but it stays twice as long because it holds more pigment."

The best part of being a chalkmaster, said Johnston, is the "90-second friendships you make."

"This is art as entertainment, where you can watch the process and become part of the process. It's more of a communal event as opposed to a product.