The toughest battle of his life: Retired soldier coping with PTSD

A decade after he returned from Afghanistan, Sheldon Roberts is still in battle mode. His mission? To stay alive.

A decade after he returned from Afghanistan, Sheldon Roberts is still in battle mode.

His mission? To stay alive.

For the 48-year-old retired sniper, every day is a fight against the scars war left on his body and mind: the anxiety attacks, hypertension, diabetes.

Post-traumatic stress disorder forced Roberts's medical release from the military, robbing him of his identity and 10 years of his life in the process.

In retirement, he's adopted a new normal. He barely recognizes himself when he looks in the mirror, but he's accepted that the old Sheldon —the one who went to war — won't be coming back.

He worries his body won't be able to handle it all someday. He's already had two heart attacks.

"I know I'm not going to live to be an old man," Roberts said.

His story is one of fragile recovery.

But not everyone has followed the same path.

Roberts has lost many friends to suicide and other PTSD-related causes over the past 10 years. That includes Ryan and Ron Anderson, who changed and deteriorated before his eyes.

Roberts can't pinpoint exactly why he has succeeded in treatment and others have not.

But he knows why he wants to stay alive. He couldn't bear the thought of his family living with his suicide, especially his young grandson, John.

"When those thoughts would come, I grasped hard," Roberts said.

"When John was born, I grasped really hard."

So he keeps fighting.

Roberts's mind is still trained for war. There's no off button.

It's left him hypervigilant, even in such normal daily situations as driving on a highway.

"You go, 'Look Sheldon, that's a nice looking black pickup that went down there,'" Roberts said.

"I don't do that to that vehicle. I do that to every one that's down the road." 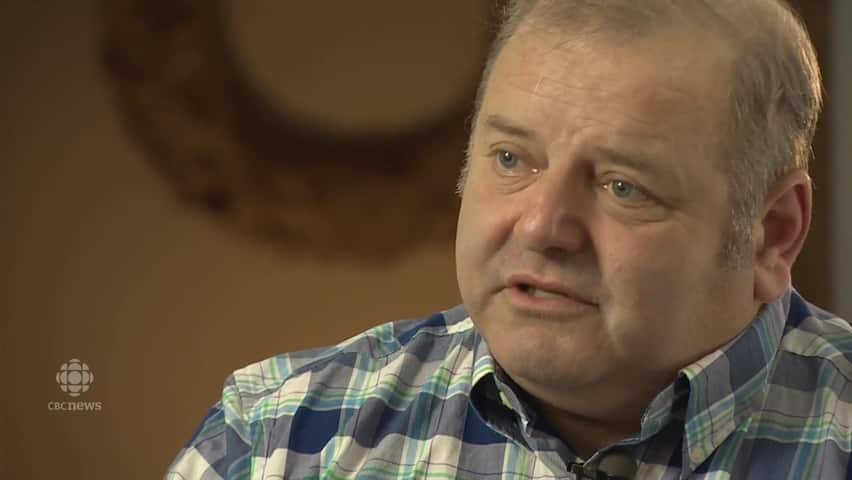 His mission? To stay alive.

3 years ago
1:10
A decade after he returned from Afghanistan, Sheldon Roberts is still in battle mode. 1:10

Before he deployed to Afghanistan in 2007, Roberts remembers the military bringing in a psychologist, who taught the troops about the psychology of warfare and killing.

But the military never taught them how to deal with the quiet moments. How to sit at a desk at CFB Gagetown in New Brunswick, filling out paperwork for ammunition, instead of engaging in combat.

That transition turned Roberts's life, and the lives of many other soldiers who fought in Afghanistan, upside down.

When he came home in late 2007, Roberts knew he wasn't the same guy. He felt aggressive, fearful and angry, but he couldn't understand why. He desperately wanted to go back on tour.

A few months later, Roberts was drinking and he got angry. He punched a hole in a door at his home.

Roberts is a good-natured Newfoundlander, better known for making jokes than starting fights. It was out of character and it terrified him.

When his doctor made him say he had PTSD, Roberts sobbed in his office.

"It was like admitting at the time that there's a weakness in me or I failed," he said.

"How come I could do that, go overseas and go on tour, but I can't handle at home?"

'There is nobody who is untreatable'

More than 14,000 Canadian Armed Forces veterans have been diagnosed with post-traumatic stress disorder as of September 2017, according to Veterans Affairs Canada.

It's not clear how many veterans have died while battling PTSD. The government tracks veteran suicides, but it does not track post-traumatic stress disorder-related deaths from other causes, such as a drug overdose.

Dr. Alexandra Heber has treated hundreds of military members and veterans for mental ailments such as post-traumatic stress disorder.

She believes treatment, and the medication that sometimes comes with it, can work.

"There is nobody who is untreatable," said Heber, who is the chief psychiatrist for Veterans Affairs Canada.

She said the government has focused its research on the tough transition from military to civilian life. The shift that was so difficult for Roberts, the Anderson brothers, and so many other soldiers.

The goal is to help them learn techniques to deal with stress and understand themselves better.

"In a way, getting treatment for PTSD is like anything in life," Heber said.

"Things that we go through and that we experience always change us somewhat."

Heber encourages any veterans who need help to talk to Veterans Affairs Canada.

"If people come forward for care, we're waiting to help them," she said."

Roberts tried to keep working. After his military career ended in February 2016, he went back to school and found a job as a construction project manager.

He went to work a half-hour early every day, expecting he would have an anxiety attack before his colleagues arrived.

By the time he came home at the end of the day, his body and mind were exhausted.

His doctor took him off work in the past year, warning that his stress level was so high that he was going to die.

At first, he struggled with what to tell people when they asked what he does.

Being a soldier was his identity and he loved the job. It introduced him to interesting places and brave people.

But things have changed. He was healthy and fit in the military, and now he gets tired after playing with his grandson.

Today, Roberts sees a guy who is making the effort. He said he's done everything the government and doctors have asked him to do to get better.

"I'm not that angry, enraged person that's generally always irritable," Roberts said. "I'm a calmer person today than I have been."

In his own words, he's a soldier locked in "a constant fight."

It means taking as many as 12 different medications several times a day, going to a psychologists and training his brain not to be negative. He often plays guitar to calm himself down and help him set goals.

The idea of his grandson growing up without a grandfather, like he did, keeps Roberts going. He wants to teach him to skate and take him snowshoeing.

"If I can come out of this on the other side, being a good family man and looking after my family, being the best grandfather I can, I'll be content."

Do you have a tip about this story? Please click here to get in touch with CBC NB Investigates.